• Approaching his 40th birthday, Aaron Archer found himself at 230 pounds and nearly 25 percent bodyfat due in part to unhealthy eating habits.
• After hiring a personal trainer, Archer started doing regular HIIT workouts in addition to weight training and calorie tracking.
• By the time his birthday arrived, Archer had completed a 40 pound weight loss transformation and lowered his bodyfat to just six percent.

Like most men, Aaron Archer wanted to look his best for his wedding. It was in June, in Italy, with plenty of pool and beach time, and the 40-year-old lawyer from London had been telling himself since the previous November that he’d get back in the gym. Now it was January, and he was running out of time. Thinking about the wedding, pool time, his upcoming bachelor party, and his impending 40th birthday, he realized he needed to get fit—fast.

He kept in shape his whole adult life, until a summer injury derailed him; after that he got busy with his career, then the holidays came with their attendant sweets and overeating. Pretty soon, the 6’4” Archer was tipping the scales at almost 230 pounds. His body fat, which he’d previously gotten below 10 percent, had swelled to 25 percent. “I felt so incredibly uncomfortable both mentally and physically and I couldn’t look at myself in the mirror,” he says.

Archer had a little under four months to turn that around. As a long-time gymgoer, he knew it would be a challenge: he had a short time to slim down without sacrificing muscle mass. “I didn’t want to go from being fat to just being skinny and gaunt,” he says.

He signed up with a personal trainer at UP Fitness, training there three times a week and at his local gym another two or three times a week. He focused on weight training, alternating upper body workouts between chest and back, with a heavy focus on leg workouts to burn the most calories. Cardio was only once a week, if at all, but occasionally he’d close a weight session with 5 minutes of high-intensity interval training (HIIT) “finishers.”

His trainer helped him define a total calorie target and divide it among carbs, protein, and fats. Archer ate about six meals a day, every two or three hours; he got to decide what he ate, as long as it fit the program, tracking his intake with MyFitnessPal. He also cut out alcohol, though he couldn’t not celebrate with a drink when the big 4-0 came around. 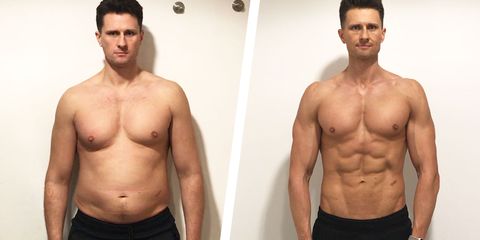 He stayed motivated by focusing on the importance of his goal. “I had to sacrifice things, of course,” he says. “I’ve never had an issue with sweet things, but I love bread, and I love going to the pub for a few beers, both of which I had to cut out.” He knew it would all be worth it.

At his bachelor party at the end of May, with his wedding looming, Archer had lost 44 pounds and brought his body fat down to 6 percent—a drop of almost 20 percent. As a tall guy, he’d been able to hide much of the weight gain from friends and family. “When I showed them the before and after shots, everyone was jaw-droppingly shocked at the difference,” he says. Most importantly, he was able to be at his best to marry the woman he loves. “I was able to achieve my goal of being in the best shape of my life for my wedding,” he says, “and marry the love of my life as her equal.”