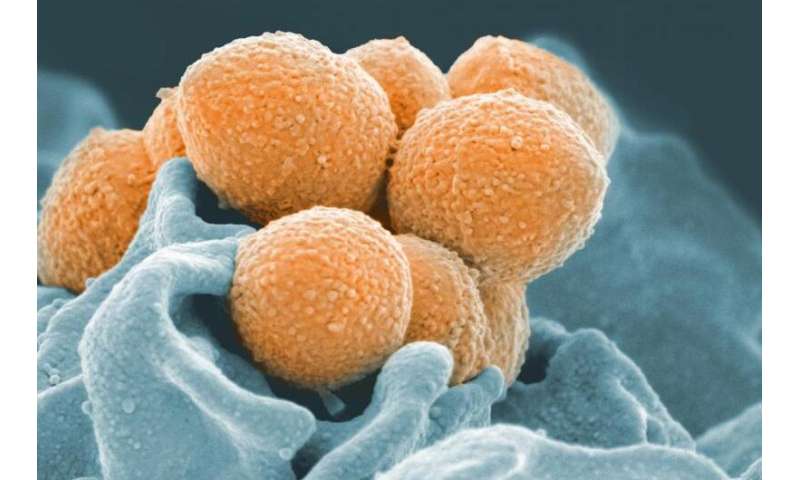 A team of scientists led by Imperial College London have discovered a new strain of group A streptococcus bacteria.

Group A streptococcus (or Strep A) is known to cause scarlet fever, throat infections and—in very rare cases—invasive disease, where the bacterium enters the bloodstream or tissue and can trigger sepsis and toxic shock.

The research team, who studied bacterial strains up to 2016 and published their work in the journal The Lancet Infectious Diseases, say the new strain (called M1UK) seems to have emerged in England and Wales since 2010 to become the dominant cause of Strep A infections. The team add the new strain can be easily treated with antibiotics.

The analysis suggests the new strain has increased in numbers among cases of scarlet fever, throat infections and much rarer invasive infections since 2014. The analysis also revealed the new strain produces more of one type of streptococcal toxin than existing strains—making it potentially more likely to cause common throat infections and scarlet fever, which could account for a rise in invasive infection.

The team are now calling for global vigilance to identify further cases of the strain in other countries, and highlight the importance of developing a vaccine against Strep A.

Professor Shiranee Sriskandan, senior author from the Department of Infectious Disease at Imperial said: “We’ve seen an unprecedented rise in the number of cases of scarlet fever since 2014 but it was only in 2016 there was a rise in the number of serious, invasive cases due to Strep A—which are thankfully very rare- coinciding with the seasonal rise in scarlet fever. Our research, done in collaboration with Public Health England, aimed to determine if there was a link between the increase in scarlet fever and the increase in invasive infections. In undertaking this research, we identified the new strain, linked to increases in both.”

Scarlet fever is a contagious disease caused by Strep A that typically infects young children, triggering a high temperature and sore throat. The disease, which peaks around spring time (March to May), is easily treated with antibiotics—but has shown a dramatic surge in recent years, with over 19,000 cases in 2016.

When the bacteria infect the body they release toxins called streptococcal pyrogenic exotoxins (also known as scarlet fever toxins), which are responsible for the disease symptoms in scarlet fever, and promote inflammation in throat infections and invasive disease.

The researchers noticed in the spring of 2016 a 1.5x increase in the number of laboratory-confirmed invasive group A streptococcus infections, compared with the previous five years. This rise occurred at the same time as scarlet fever cases peaked.

The team, who are based in the Department of Infectious Disease and affiliated to the NIHR Health Protection Unit in Healthcare Associated Infections and Antimicrobial Resistance at Imperial, set out to investigate whether the bacteria causing the Strep A infections were changing in any way.

They were able to investigate this thanks to the Imperial College Infection Biobank that was set up to collect bacterial strains from across North West London with the help of the Diagnostic Laboratory of Imperial College Healthcare NHS Trust, supported by the Imperial NIHR Imperial Biomedical Research Centre. All types of group A streptococcus from scarlet fever or common throat infections are collected along with any invasive strains.

The team studied infections between the spring times of 2014-2016 to identify the main genetic subgroups causing scarlet fever or common throat infections (these subgroups are labelled emm, due to a type of gene the bacteria carry).

This suggested the emm1 strain may have changed in some way—and was potentially getting ‘fitter’. To investigate this, the team analysed the genomes of all emm1 strains in North West London between 2009 to 2016. This unmasked a new strain type within the emm1 group of bacteria, which differed from the other emm1 strains by just 27 genetic mutations, some of which were in genes potentially implicated in toxin production.

Experiments by the same team revealed the new strain produces nine-times more streptococcal pyrogenic exotoxin A (SpeA) than other emm1 strains—possibly providing one explanation for the rise in cases of Strep A.

Among invasive cases of Strep A, it was noted that emm1 strains were the main cause of infections in recent years, and in particular, spring 2016.

The researchers looked for the presence of the new strain in samples from 552 cases of emm1 invasive Strep A in England and Wales between the spring time periods of 2013-2016.

The results revealed 77 per cent of cases of invasive disease caused by emm1 Strep A in England and Wales in spring 2016 were caused by the newly identified M1UK strain.

When the analysis expanded to include all emm1 strains (1240 strains) that had been sequenced over a 10 year period from across the UK, mainly from invasive cases of the disease, this reached 84 per cent of emm1 samples by 2016 .

The team also analysed 2800 Strep A genome sequences from around the world and found single cases of M1UK in Denmark and the USA.

However, the team stressed the new strain did not play a significant role in the initial 2014 rise in UK scarlet fever cases—and it was not the strain behind a Strep A outbreak in Essex this year.

They add this research looked only at strains circulating up until 2016, and analysis of the Strep A strains in the years since then is now needed.Dr. Elita Jauneikaite, first author of the study from Imperial explained: “There is still uncertainty around the cause of the rise in scarlet fever—and whether it is a result of practice change, population or environmental factors. Research investigating the most appropriate way of reducing the burden of Strep A infections is currently underway—including work into developing a vaccine. We may also need to consider whether guidelines for diagnosing and treating throat infections may need to take evolution of new strains and complications like scarlet fever and invasive infections into account.”

Dr. Nicola Lynskey, co-first author, added: “The emergence of this new strain suggests we may need increased surveillance of the type of strains causing scarlet fever, throat infections and sepsis—both at a UK and global level.”