Men Have More Grooming Options Than Ever 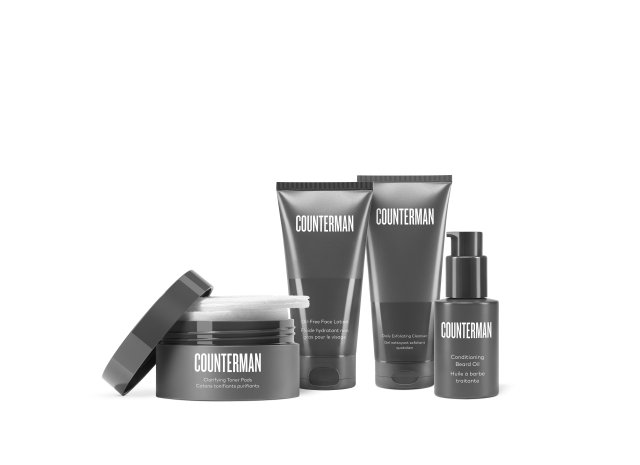 Men's grooming options are multiplying.
The U.S. men's prestige skin-care market is worth $122.4 million annually as of November 2018, according to data from The NPD Group. That figure pales in comparison to the women's market, but its growth — up 9 percent from the year prior — is telling. Men, it seems, are more open than ever to prestige skin care, and brands are ready to serve.
Beautycounter is the latest prestige brand to enter the men's game, joining previously female-focused brands like Dr. Barbara Sturm, Clinique and Tom Ford Beauty, which have released men's lines. Today, Beautycounter launches Counterman, a line of eight men's-specific body-care, facial skin-care and shaving and grooming products that range in price from $19 to $36.
"Guys are less afraid of grooming than they have been in the past and are willing, with education, to dive into products," said Michael McGever, Beautycounter's head of product development. "It used to be that mass is where the men’s business happened. We’re seeing that our target customer, that 25-year-old to 45-year-old, is willing to spend more for prestige."
Beautycounter is said to have done between $300 million and $350 million in sales in 2018. It is expected to grow 33 percent this year.
Counterman's formulations were made in accordance with Beautycounter's The Never List — more than 1,500 ingredients the company deems questionable or harmful — and incorporate clean alternatives such as sequoia stem cells, charcoal and jojoba.
Beautycounter previously tested men's skin care with a gift set that launched during the 2017 holiday season. According to McGever, the gift set sold out in 12 hours and became Beautycounter's fastest-selling product at that time.
One reason for this success? Women.
"What’s interesting is 88 percent of our female customers are married," said McGever. "That’s a huge way to expand our audience: to give them solutions for their husbands."
Tristan Walker, founder and chief executive officer of Walker & Co., which was recently acquired by Procter & Gamble, noted women's role in men's education of skin-care products.
"Women tend to be the first line of defense for education," he said. "Some 30 percent of our Bevel shave customers are women. Some of this is women using our products themselves, but a lot of it is for their loved ones.”
Walker is the brains behind Bevel, a shaving line geared toward men of color. On Jan. 9, Bevel added a skin-care category consisting of four products — a face wash, $11.95; exfoliating toner, $13.95; face gel, $13.95, and spot corrector, $15.95 — and a bundle, $34.95, that includes the face wash, toner and moisturizing gel. By Jan. 11, the Skin Essentials Bundle had sold out. The face wash is now sold out, too.
"Women do most of the shopping for men anyway when it comes to this sort of thing," said David Olsen, ceo of Cos Bar. "A guy gets hooked on a product probably nine out of 10 times because his wife or girlfriend or friend of a girl said, 'You need to moisturize.'"
Women are part of the success of the men's category, but they aren't responsible for it. Bevel, for one, is geared specifically toward men of color, who have historically been underserved by the beauty industry. That marketing angle is enough to set it apart.
"There’s an exponential growth curve in multicultural," said Walker. "We have a laser focus on the multicultural men’s market when no one else does. It’s the present, it’s the past, it’s the future."
Men's brands tend to focus on the basics — a cleanser, moisturizer and shaving cream, but male consumers are increasingly interested in other categories — sheet masks, included.
"Historically, the male routine was quite limited," said Fiona Firth, buying director for Mr Porter, which introduced grooming in 2013. "We’ve now seen demand in additional categories such as sheet masks from brands like La Mer and Erno Laszlo and serums from brand like Perricone MD and Aesop. We also had great success on tools such as the LED eye mask from Dr. Dennis Gross."
Skin care, body care and hair care are Mr Porter's leading grooming categories, followed by fragrance. The online shopping destination also offers a curation of grooming products called the Mr Porter Grooming Restore Kit, $120, which is sold out.
Still, simplicity is key — at least to start — and, as Olsen noted, with the Estée Lauder Cos. Inc. and L'Oréal backing the main players in the space, newcomers will have to find their angle in order to break through.
"I look at the history of Estée Lauder and makeup wasn’t really a thing, it was for the rich," said Olsen. "Estée was basically getting it out to the masses without being mass. That’s what has to happen with men. There needs to be a shift and how that happens is the big question mark. It can’t be too expensive, can’t be too contrived. It has to be simple. Who’s gonna be Kiehl’s number two or Clinique for Men? They’ve got big conglomerates behind them, so catching up is hard."
Source: Read Full Article