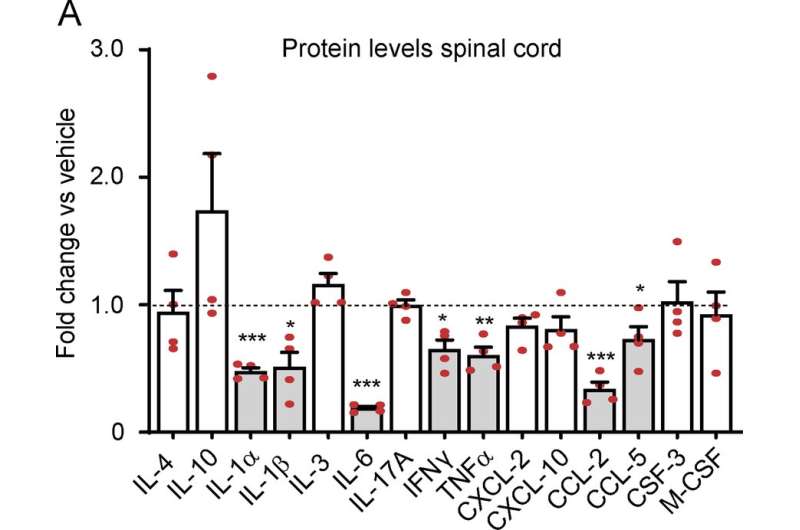 A team led by the Institut de Neurociències at the Universitat Autònoma de Barcelona (INc-UAB) managed to reduce chronic inflammation associated with multiple sclerosis in mice thanks to the administration of a type of lipid that mediates inflammation. The team found that these types of mediator substances, responsible for resolving the inflammatory process when it is no longer beneficial, are minimized in people with multiple sclerosis as well as in animal models of the disease. The use of these mediators could become a good strategy for the treatment of this autoimmune disease.

Acute inflammation is a protective response to infection that promotes tissue regeneration after injury. Once its function has been performed, a series of mechanisms regulated by lipids acting as mediators are responsible for resolving it. An error in the resolution response results in uncontrolled inflammation that is detrimental for the tissues. In multiple sclerosis, an autoimmune disorder in which the body’s defense cells attack the lining of the tail of neurons (myelin), the inflammation is persistent and plays a key role in the development of the disease.

A research team led by Rubén López-Vales, Professor of Physiology at the UAB and researcher at the Neuroplasticity and Regeneration Group, INC-UAB, has managed to reduce the chronic inflammation associated with multiple sclerosis in a mice model of the disease, by administering one of the resolving lipid mediators of inflammation, Maresin-1. The substance exerted a therapeutic effect on mice, drastically reducing the amount of proteins promoting inflammation (cytokines), as well as the number of cells in the immune system in both the spinal cord and the blood. A continuous administration of the lipid over time also protected neurons from demyelination and improved the effects of neurological deterioration caused by the disease.

In the study, published in the Journal of Neuroinflammation, researchers looked at samples from patients with multiple sclerosis and from mice models, and found that there was insufficient production of Maresin-1 and other lipid mediators that end inflammation. The levels of these immunosuppressive substances, which were almost undetectable, prevented the inflammatory process from stopping.

“Our results suggest that one of the body’s mechanisms for resolving inflammation is not working properly in patients with multiple sclerosis, which could partly explain the episodes of autoimmunity they experience,” says Dr. López-Vales.

The study, conducted in collaboration with the University of Montreal and the Universidad de La República in Uruguay, points to therapy with inflammatory-resolving mediators as an innovative and promising strategy for the treatment of multiple sclerosis and other autoimmune diseases needing further research.