Arthritis treatment which can help patients with alopecia

Tens of thousands of people with severe alopecia could soon benefit from a treatment that has helped patients get as much as 80 per cent of their hair back.

Called baricitinib, the drug is already in use on the NHS for conditions such as arthritis and dermatitis. It works by interrupting faulty signals that make the immune system attack follicles on the head, causing hair to fall out.

Earlier this month, international data from 1,200 patients with severe alopecia showed that taking the drug daily for nine months could help almost all hair regrow in a third of patients. 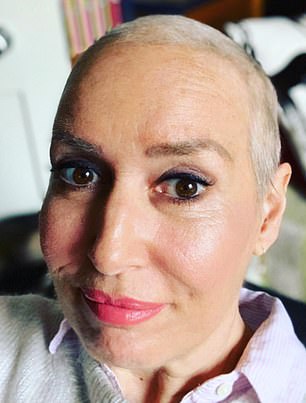 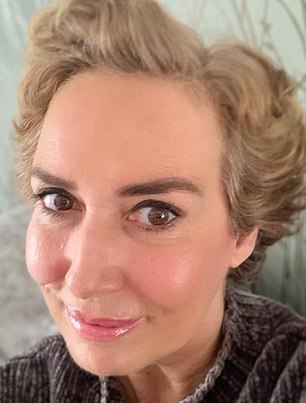 One baricitinib success story is Tracy Watkins, 53, from North London, who has been taking it daily since her diagnosis of alopecia areata in May 2019

Last week, EU drug chiefs – the European Medicines Agency – recommended approval for the medicine based on the results of this study, published in the New England Journal Of Medicine

‘Patients are soon to have far more options available than they ever have done before.’

Alopecia is the term used to describe general hair loss – which affects roughly 40 per cent of women, and 30 per cent of men at some point in their lives.

But some 100,000 Britons develop a condition called alopecia areata, which happens when cells in the immune system go into overdrive and attack hair follicles, for reasons that scientists don’t yet understand.

Over a period of a few weeks, patients notice round patches of total hair loss. It can also affect eyebrows, eyelashes and hair elsewhere on the body.

Steroid treatments can be prescribed – either in a cream form, as an injection into the head or as pills – and are effective in one in five patients. But taking steroid pills long-term can dramatically increase the risk of serious conditions like type 2 diabetes, so doctors recommend they stop taking them after six weeks.

Other forms like creams can irritate the skin and cause agonising migraines. But baricitinib, part of a family of drugs called JAK inhibitors, can be taken every day and continued indefinitely. Side effects are usually minimal because, unlike steroid drugs, this medication does not attack healthy immune cells.

Studies show that baricitinib sparks hair regrowth within three months, and it continues to grow back fuller and thicker.

The treatment is currently available privately from some dermatology clinics at a cost of £1,000 for a month’s supply. But it is undergoing an appraisal for free use conducted by NHS medicines watchdog NICE, with results expected next year. Dr Farrant hopes it will be approved for NHS patients.

Consultant dermatologist Dr Adam Friedmann has been prescribing the drug to his private patients at Stratum Clinics for five years.

He says: ‘I would like to see baricitinib available for everybody. It has minimal side effects and is incredibly effective.’ News of baricitinib’s effectiveness comes in the same week that results from another trial in the US showed a different JAK inhibitor improved hair growth in 40 per cent of patients.

One baricitinib success story is Tracy Watkins, 53, from North London, who has been taking it daily since her diagnosis of alopecia areata in May 2019. ‘Over a period of three months I lost all my hair – eyebrows, eyelashes, body hair, everything,’ says the mother-of-one. ‘Every time I touched my hair, tufts came out in my hand. It was torture.’

After a GP said there was nothing that could be done, a friend told her of a private clinic offering baricitinib. She was prescribed a 4mg dose of the drug every day, and after four months started to see results.

‘It was like tiny sprouts of hair emerging,’ says Tracy, who is using savings to pay for the drug.

‘Pretty soon I had full coverage of short fluffy hair and then it just kept growing.

‘It’s miraculous. I’ve got even thicker hair than I had before.’