Boy’s brain repaired itself after doctors were forced to cut out a SIXTH to remove a benign tumor, leaving scientists in awe

Just before his seventh birthday, Tanner Collins lost a sixth of his brain.

Surgeons had to crack his skull open and carefully excise a golf ball-sized benign tumor that was growing toward the back of his head, pressing his brain and causing unbearable migraines and seizures.

Every medication had failed Tanner, and he could barely get through a school day. The surgery would at last stop the seizures – but it would cost Tanner portions of his brain that let him see and process visual information.

Tanner and his parents, Nicole and Carl, of Pittsburgh, Pennsylvania, were prepared for the worst. He might be left blind. Even if he could see, he might suffer cognitive delays.

But today, five years later, Tanner is a skilled chess player, reports Medium’s OneZero, and his mind provides a unique insight into how the brain repairs itself. 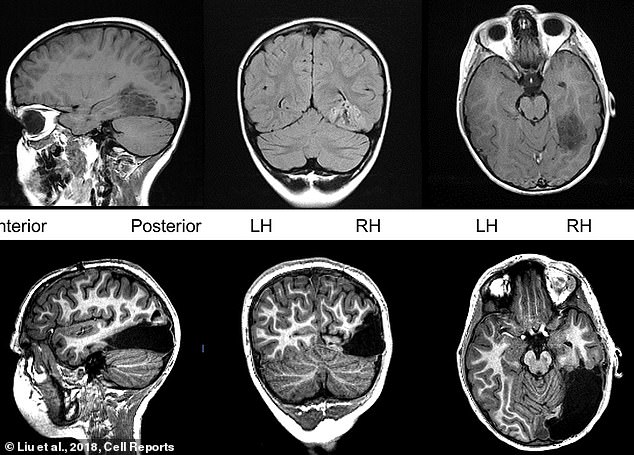 To stop debilitating seizures, surgeons removed about one sixth of Tanner Collins’s brain (bottom). But the left side of his brain has taken over all of the missing part’s typical duties

To save him from seizures, doctor’s had to take all of Tanner’s right occipital lobe and half of the occipital lobe, the part toward the back, close to the base of the neck.

Despite losing 15 percent of the organ, the left side of Tanner’s brain has taken over the tasks that the missing right bits originally did.

It sounds like science fiction, but it’s possible through a key feature of the brain called neuroplasticity.

All brains have plasticity to some extent.

The term refers to the brain’s ability to make new and different connections between neurons.

Without it, we lose our ability to learn and remember things.

Indeed, we see a loss of neuroplasticity in adults with Alzheimer’s and other forms of dementia.

It is also crucial to the brain’s ability to heal after traumatic injuries like concussions.

But repairing damaged neural connections is one thing.

Making up for the loss of entire lobes of the brain is quite another – especially those involved so intimately in sight and visual processing.

Carnegie Mellon University psychologist Dr Marlene Behrmann hopes that studying the remarkable recovery of Tanner’s brain can shed a light on exactly that.

She hopes that a better understanding of these extensive brain repairs can help her work out how to retrain her patients’ brains to see and understand visual cues.

Since the moment Tanner woke up from surgery, doctors like Dr Behrmann have been closely monitoring the electrical activity – the means by which neurons and regions communicate with each other – in Collin’s brain.

Over the course of the seven days Tanner was recovering in the hospital, doctors were trying to create a ‘map’ of which parts were talking to one another, and how, and which parts had gone dark and quiet.

They would compare this to the maps made of Tanner’s brain activity when it was whole.

He could still see – a huge win in itself – and recognized his parents. But names didn’t come so easily at first.

But within a few days, he got that back, too.

That quick gain is somewhat remarkable, but, as scientists first began to understand in the 1960s, it is also a function of Tanner’s age.

Up until 25, the brain is still largely developing – especially the visual parts.

Tanner was young enough that his brain was still becoming more finely tuned to recognizing faces and object, but wasn’t set in its ways, so to speak.

Somehow, that seems to have allowed the left side of his brain to take over the right’s duties wholesale.

For three years after surgery, Dr Behrmann put Tanner through the paces of a series of memory and learning games involving seeing, recognition and naming, every six months.

She had him play these games from inside a functional MRI machine so she could monitor the flow of blood to various parts of his brain and then compared the results to the performances of children Tanner’s age without brain injuries or deficits.

Besides the empty area in the back of his head and the  blind spot along the periphery of his left eye, Tanner seems no different from other children his age.

He’s not the only one. Dr Behrmann has monitored eight other children who have undergone similar procedures. All but one have recovered all deficits.

Dr Behrmann continues to monitor Tanner, because an important question remains: what is the cut-off age for his degree of recovery?

If she can work this out, doctors will be able to pinpoint when the surgical risk is worth it, and when there’s too much at stake.

Plus, it could provide key insights into helping others recover more neuroplasticity.