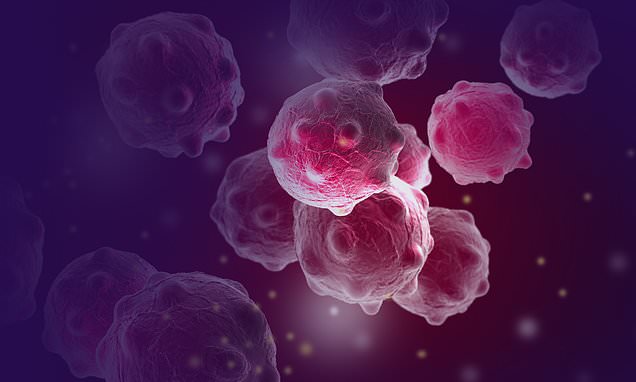 Breast cancer cells could be stopped from spreading by being turned into harmless fat cells, scientists have shown.

Cancer cells are able to adapt and spread using a certain pathway, but scientists in Switzerland have been able to exploit it in a mice study.

The combination therapy uses a diabetes drug and a cancer drug which work together to convert the cells into fat and stop them from reverting back to cancer.

It still needs to be clinically tested, but the team at the University of Basel hope the process will be quicker because both drugs are already approved by the FDA.

Breast cancer is the most common cancer in the US and UK, with around 150 people diagnosed a day in the UK, according to Cancer Research. 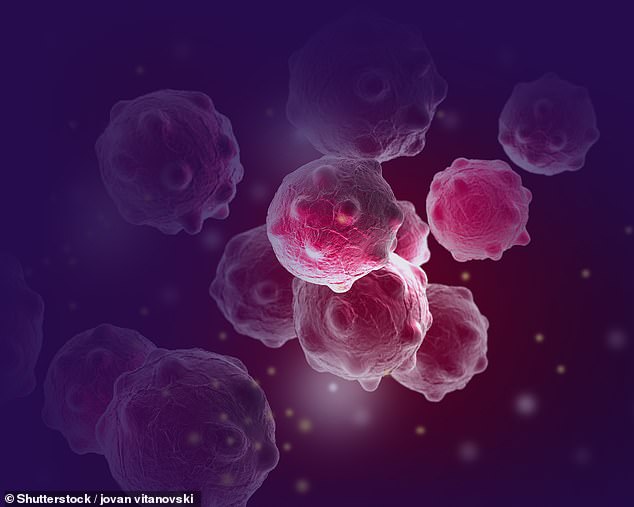 Breast cancer cells are able to adapt and spread using a certain pathway, but scientists in Switzerland have been able to exploit the cells into becoming harmless fat

EMT is used by the body, usually associated with the development of organs and wound healing.

For example, when you cut your finger, some of the cells become ‘fluid’, changing into a type of stem cell which can then grow into whatever kind of cell the body needs – bone, skin or blood.

Cancer cells use EMT to alter their molecular properties and change into a different type of cell, enabling them to spread around the body.

WHAT ARE THE SYMPTOMS OF BREAST CANCER?

Around 55,200 people are diagnosed with breast cancer in the UK each year. One in eight women develop the disease during their lifetime.

The illness can cause a number of symptoms, but the first noticeable symptom is usually a lump or area of thickened breast tissue.

Most breast lumps aren’t cancerous, but it’s always best to have them checked by your doctor.

According to NHS Choices you should also see your GP if you notice any of the following:

During EMT, they are in an highly changeable state, which is when researchers see them as vulnerable to target in a ‘window of opportunity’.

The researchers treated mice implanted with an aggressive form of human breast cancer.

They were given both a diabetic drug called rosiglitazone and a cancer treatment called trametinib.

The cancer cells, which had broken free from the primary site to spread, were changed into fat cells – a process called adipogenesis.

It didn’t work with every cell, but in the successful cases they showed no signs of transitioning back, growing into a tumour, or spreading to surrounding tissue.

One of the authors, Professor Christofori said: ‘The breast cancer cells that underwent an EMT not only differentiated into fat cells, but also completely stopped proliferating.

‘As far as we can tell from long-term culture experiments, the cancer cells-turned-fat cells remain fat cells and do not revert back to breast cancer cells.

‘Since we have used FDA-approved drugs to study the preclinical effect of the treatment, a clinical translation may be possible.’

In the meantime, the team are looking into the prospect of using the therapy in combination with chemotherapy.

Professor Christofori said: ‘In future, this innovative therapeutic approach could be used in combination with conventional chemotherapy to suppress both primary tumour growth and the formation of deadly metastases.’