In many cases, a complex interplay between our genes and the environment governs whether or not we will develop a certain disease. Interestingly though, researchers are discovering that the genetic component of disease predisposition may depend on our ethnic background.

In a study published recently in Annals of the Rheumatic Diseases, a team of researchers led by Osaka University identified a genetic variant in the Japanese population that increases the likelihood of interstitial lung disease (ILD) among rheumatoid arthritis (RA) patients.

RA is an inflammatory autoimmune disease that primarily affects the joints but can also damage the heart, eyes, lungs, skin, and vascular system. ILD, a group of conditions characterized by fibrosis, or scarring, of the lung tissue, is one of the most common complications of RA and carries with it a significantly higher risk of death than uncomplicated RA.

“Previous studies have linked several genetic variants with an increased risk of ILD-complicated RA, but these risk variants do not hold for non-European populations,” explains study lead author Yuya Shirai. “We therefore screened the genomes of almost 5,000 Japanese RA patients with and without ILD in search of novel genetic variants associated with ILD-complicated RA in the Japanese population.” 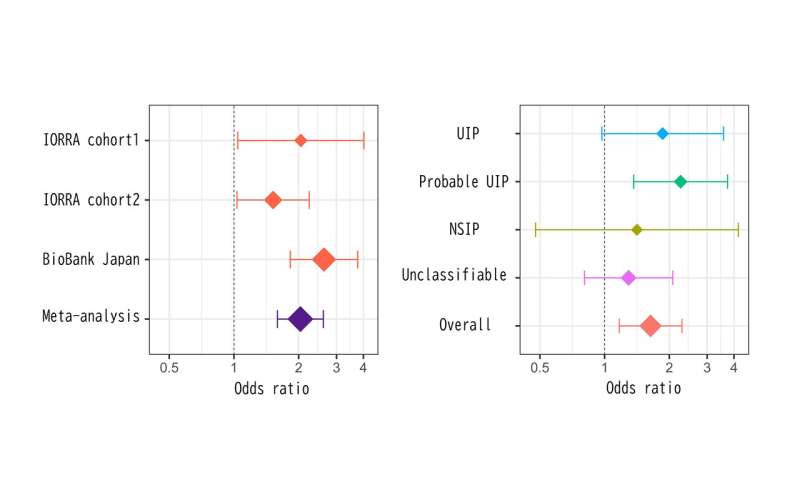 Small variations in the sequence of a gene, often even a single nucleotide, can result in subtle changes in function. Using an approach called a genome-wide association study, the researchers found a variation at a single genetic locus on chromosome 7 that was more common among Japanese RA patients with ILD than those without.

More in-depth analysis revealed that the risk variant was located within a gene called RPA3, which previous studies have shown is essential for the cellular response to DNA damage and the regulation of telomeres, the regions at the ends of chromosomes that protect against degradation. One of the most common outcomes of telomere dysfunction is lung fibrosis.