Don’t sleep on the hypnotic potential of thalidomide 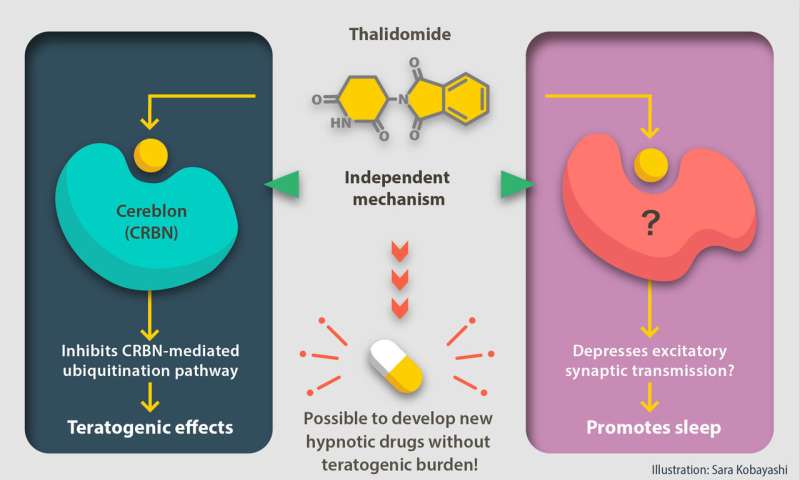 Thalidomide is a medication with several different effects, one of which is promoting sleep in the context of insomnia. In a new study, researchers from the University of Tsukuba have discovered that thalidomide exerts its hypnotic effects through mechanisms distinct from those for the drug’s notorious teratogenicity.

Thalidomide was first marketed under the trade name Contergan in the late 1950’s in Europe to tackle anxiety, sleeplessness, and morning sickness in pregnant women. It was eventually removed from the market because of its teratogenic effects, which infamously led to phocomelia, or severe limb deformities. Today, thalidomide is used as a medication to modulate the immune system to fight off several types of cancer. The mechanism behind the teratogenic and immunomodulatory effects of thalidomide has been well-studied, whereby it was shown that the drug binds to the protein cereblon and blocks the cereblon-mediated ubiquitination pathway. This pathway is important for the degradation and removal of specific subsets of proteins within cells, and thus its blockage is expected to disrupt various cellular signaling mechanisms.

“Thalidomide is a powerful, yet controversial drug owing to its history,” says corresponding author of the study Professor Masashi Yanagisawa. “The goal of our research was to investigate the as-yet undetermined molecular mechanism responsible for the hypnotic effects of thalidomide.”

To achieve their goal, the researchers asked if cereblon-mediated ubiquitination is involved in the hypnotic effects of thalidomide or if thalidomide acts independently of cereblon to exert sleep-inducing effects. The researchers first treated normal mice with thalidomide, and recorded electroencephalography (EEG) and electromyography (EMG) to test whether the drug had an effect on the sleep of the animals. The researchers found that thalidomide increased non-REM (rapid eye movement) sleep without reducing REM sleep. Reduction of REM sleep is one of unwanted side effects of common sedatives.

The researchers then engineered a mutant mouse in which thalidomide no longer interacted with cereblon. Thalidomide had the same effects on the sleep of cereblon mutant mice as on that of normal mice, suggesting that thalidomide acts independently of cereblon to induce sleep (Figure). To corroborate these findings, the researchers investigated molecular pathways of known general anesthetics and sedatives in normal and cereblon mutant mice, and found that thalidomide acted on the same neurons as those drugs.