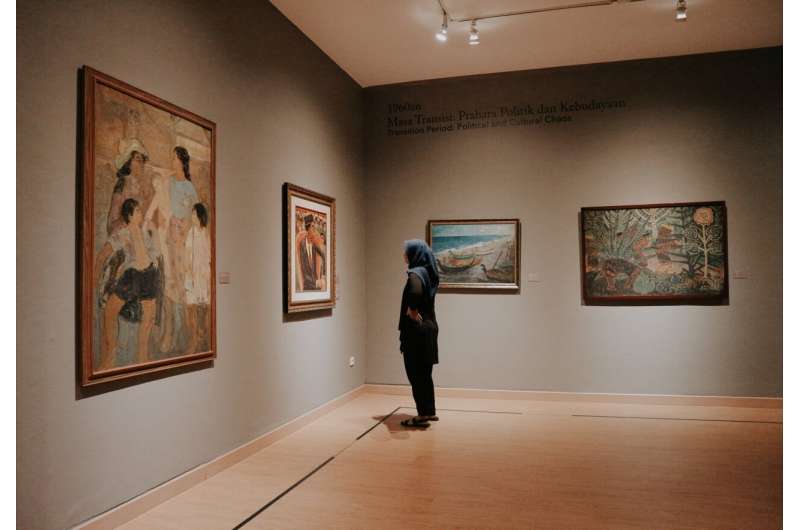 Have you ever wondered what the millions of neurons in your brain are doing when you ponder a favorite piece of art? In a new paper just published in the Journal of Cognitive Neuroscience, a team of researchers from Breda University of Applied Sciences and Tilburg University in the Netherlands, as well as the Max Planck Institute for Empirical Aesthetics (MPIEA) in Frankfurt, Germany, present new work measuring brain waves generated by aesthetically appealing experiences. Their findings suggest that aesthetic experience goes hand in hand with both actively constructing meaning from an artwork and being in a state of heightened attention.

Neurons in the human brain are constantly communicating. This communication relies on very fast oscillations. In order to investigate these processes during the reception of art, the international research team conducted a study using electroencephalography (EEG): The participants viewed different images of works of art and rated how much each artwork moved them aesthetically while their brain waves were measured via an EEG cap.

When participants looked at artworks they found to be appealing, the electroencephalogram revealed a greater amount of very fast gamma waves over a certain part of the brain, as compared to when they viewed artworks that were not appealing. Interestingly, these gamma waves did not appear right away, but only after about one second. This delay suggests that participants were not simply reacting to the visual properties of an artwork, but that these brainwaves reflected a process of meaning formation. Edward A. Vessel, research associate at the MPIEA and co-author of the study, explains: “We don’t just passively perceive art, but engage in a process of discovery that can last several seconds. We try out different interpretations and meanings. This process takes time to develop, and can continue for many seconds as a viewer savors the feeling of engaging with art.”

In addition to gamma waves, the scientists also observed so-called alpha waves. These were more pronounced for both high- and low-rated artworks, as compared to images given medium ratings. These waves likely reflect the fact that study participants pay more attention to art they either especially like or dislike than to works they feel neutral about.