First of its kind statistics on pregnant women in US prisons 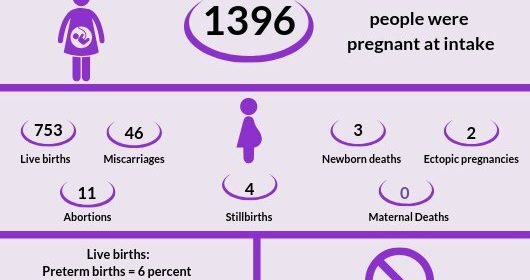 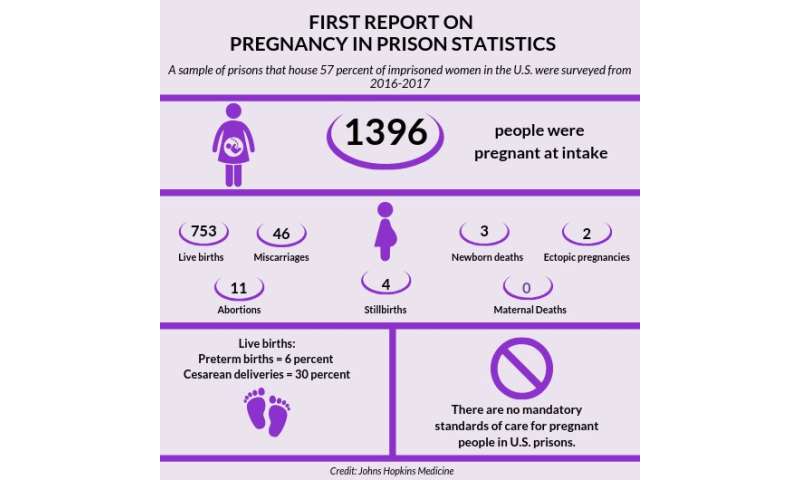 In what is believed to be a first-of-its-kind systematic look at pregnancy frequency and outcomes among imprisoned U.S. women, researchers from Johns Hopkins Medicine say almost 1,400 pregnant women were admitted to 22 U.S. state and all federal prisons in a recent year. They also found that most of the prison pregnancies—over 90 percent—ended in live births with no maternal deaths.

Historically, say the researchers, these numbers have not been tracked by U.S. federal agencies or state prison systems, yet most of the women in American prisons are of reproductive age. And although this particular study didn’t address how pregnancy care was provided, the researchers say gathering diverse, nationally representative data such as this is a much-needed first step toward developing consistent guidelines for tracking the numbers and improving maternity care in the U.S. prison system.

“Currently, there are no mandatory standards for prenatal and pregnancy care for women in prisons,” says Carolyn Sufrin, M.D., Ph.D., lead author of the study, an assistant professor in gynecology and obstetrics at the Johns Hopkins University School of Medicine and author of Jailcare: Finding the Safety Net for Women Behind Bars. “This study gives us insight into the actual numbers, which will help us better understand the scope of care needed by pregnant people behind bars. Having this information could also help inform policies to consider alternatives to incarceration for pregnant people.”

The findings of the new study, conducted by the researchers in collaboration with prison officials who reported information on a monthly basis for one year, were published online March 21 in the American Journal of Public Health.

According to the Bureau of Justice Statistics (BJS), there were more than 110,000 women in federal and state prisons in the United States at year-end 2016, with 75 percent of these women being 18-44 years old. A 2004 BJS survey found that 3 percent of women in federal prisons and 4 percent of women in state prisons reported they were pregnant at intake. Until this new study, this BJS survey from 15 years ago, which only accounted for self-reported pregnancies, was the only data on pregnancy prevalence in prisons.

Other and more current national health statistics databases exclude data from prisons, further contributing to the lack of maternal health and birth information about imprisoned populations.

To help close the information gap, the Johns Hopkins researchers gathered data on pregnant women in 22 state systems and all federal prisons, and tracked pregnancy outcomes over a period of 12 months from 2016-2017.

They did so by first contacting the prisons’ custody and health care administrators via email or phone with an invitation to participate in the study. For federal prisons, approval of participation was granted by the acting director of the U.S. Department of Justice and administrators at the Federal Bureau of Prisons. The states’ departments of corrections’ policies allowed for participation of state prisons.

The researchers then arranged for a designated “site reporter” in each prison to use a survey form to track outcomes on a monthly basis among the pregnant patients in their prisons, reporting data on miscarriages, live births, stillbirths, maternal deaths, preterm births and abortions. Site reporters could be wardens, prison research coordinators, women’s programming coordinators, medical directors or other health care personnel. At the end of each month during the survey year, site reporters sent their findings to the Johns Hopkins researchers using a secure, web-based program, Research Electronic Data Capture (REDCap).

In a bid to keep the data-gathering as accurate as possible, the Johns Hopkins researchers interviewed nearly half of the site reporters (43 percent) midway through the study to better understand how they tracked the data and to ensure accuracy. Data were also reviewed by research staff monthly to assess and correct inaccuracies. All data errors were corrected by site reporters during the study period.

From the data reported from each site, researchers determined that 1,396 already-pregnant women were admitted to the 22 state and all federal prisons in the study over the 12-month study period. These prisons house 57 percent of imprisoned women in the United States. For this study, no specific demographic information, such as race or age, was collected.

Of the pregnancies that ended while women were in custody, 753 resulted in live births. Six percent of the live births were preterm, and 30 percent were delivered by cesarean section, but these numbers varied greatly by state. The national statistic for preterm births and C-section deliveries in the general population are 10 percent and 31.9 percent, respectively.

Forty-six of the pregnancies ended in miscarriages, 11 ended in abortions, four ended in stillbirth and three newborns died. None of the mothers died. In the United States, there are more than 700 maternal deaths each year.

“We can’t know for sure that these numbers come from the same women who were admitted who also had pregnancies that ended in prison,” says Sufrin. “They could have gotten released.”

The researchers said differences such as pre-incarceration health conditions, access to prenatal care, food, shelter and access to illegal drugs could account for the level of preterm birth rates in specific prisons that were higher or lower than the national average. In 2016, the national average for preterm births was 9.85 percent. The average for prisons in the study was 6 percent.

Access to and quality of reproductive health care varies from prison to prison, the researchers note, so the findings cannot be generalized to states that did not participate in the study. The researchers also recorded large variations in pregnancy outcomes by state.

For example, in Kansas, Vermont and Arizona, 20 or more percent of pregnancies ended in miscarriage. Additionally, Texas and Ohio had months with more than 50 pregnant women present in their prisons, while Maine and Rhode Island had some months with zero pregnant inmates.

Sufrin says that the state-by-state differences could be attributed to state sentencing laws, prison health care policies, access to public reproductive health care or other factors not measured in this study.

“We were very surprised by how willing and eager the prisons were to participate and to have better data to work with,” says Sufrin. “With the collective help of the prisons, our research team was able to take the initial steps to gather more systematic and standardized information.”

She added: “We know there are pregnant people in prison, and until now, it wasn’t clear whether or not people wanted to pay attention to this particular population or do the adequate research needed to advance the quality of reproductive health care in prisons.”

The researchers cautioned that the study had several limitations: It didn’t assess how far along in pregnancy the women were at intake, the size of the prisons, the pregnancy testing policies of the prisons, the type of hospital in which imprisoned women deliver and the variability in prison living conditions. All of those factors may or may not have contributed to variations in outcomes.

They also weren’t able to collect pregnancy statistics from the other 28 state prison systems, including three large systems that declined participation (California, Florida and New York).

In future studies, the researchers hope to collect more information on the individual experiences of the women by interviewing, collecting demographic data and assessing the quality of their maternity care.

“Our hope is for these findings to be used to advance national standards of care for imprisoned pregnant women,” says Sufrin, “and to support those who advocate for policies and laws that guarantee acceptable and safe pregnancy care and childbirth, that consider alternatives to incarceration for pregnant people, uphold reproductive justice, and encourage more attention to the reproductive health needs of marginalized women and their families.”