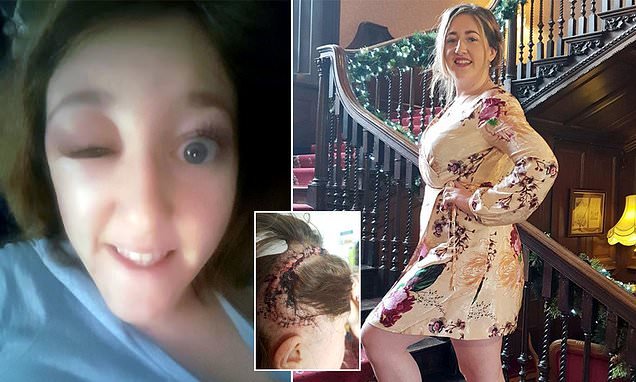 Hairdresser, 26, who was left with a bulging eye following a seven-hour operation to remove a tennis ball-sized brain tumour is given the all-clear

A hairdresser who had a tennis-ball sized brain tumour has been given the all-clear after a seven hour operation to remove the mass.

Vicki Hilborn, 26, had been suffering with crippling headaches for ten years before the tumour was discovered in July 2017.

Doctors described her tumour, which is a slow-growing grade two glioma, as ‘the biggest they’d ever seen’.

Mrs Hilborn, from Cornwall, had a swollen eye socket and face for days after the surgery, but is living her life to the fullest with the risk of the tumour returning. 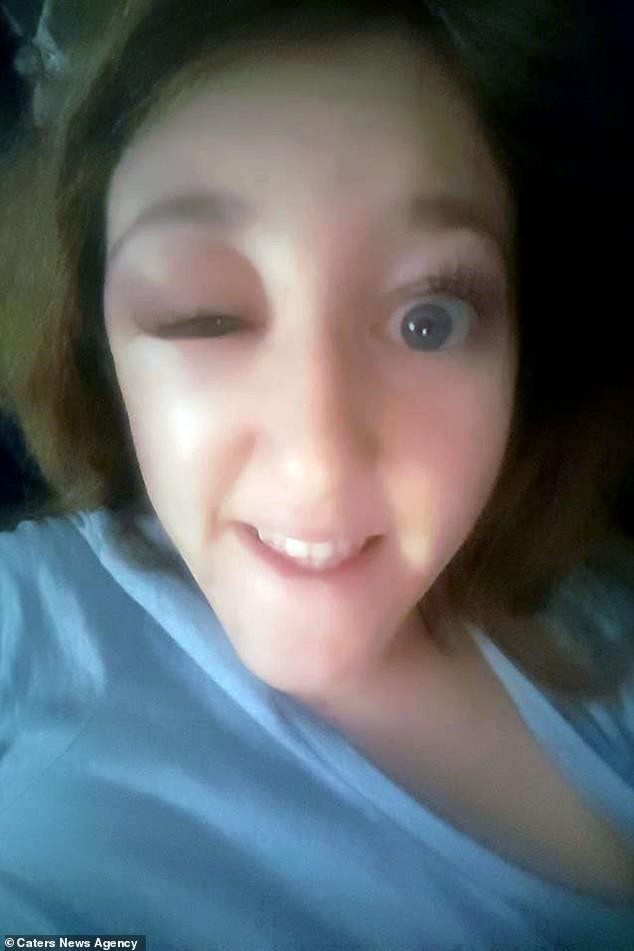 Doctors described Vicki Hilborn’s brain tumour, which is a slow-growing grade 2 glioma, as ‘the biggest they’d ever seen’. Her eye was left bulging and swollen after the surgery 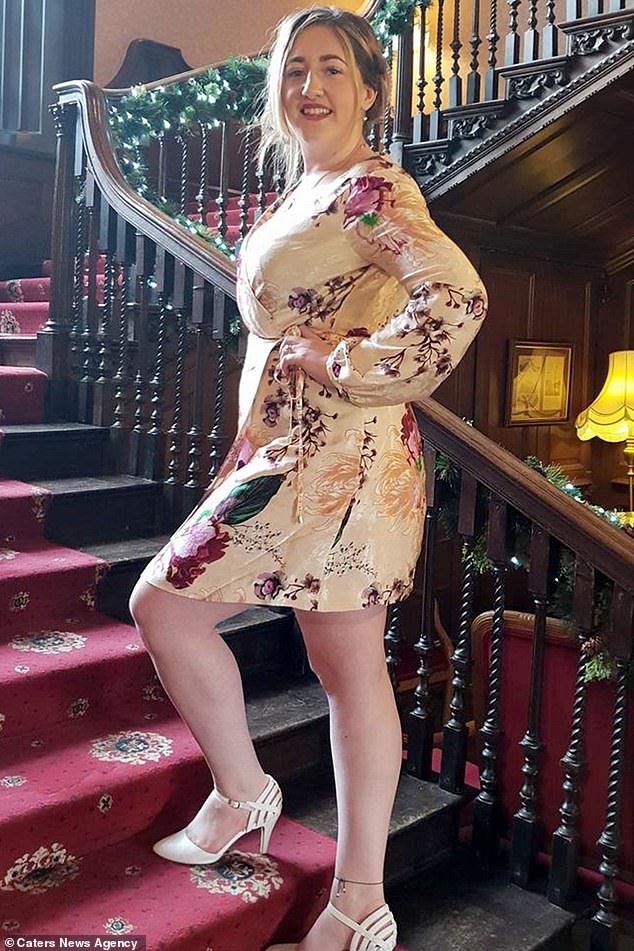 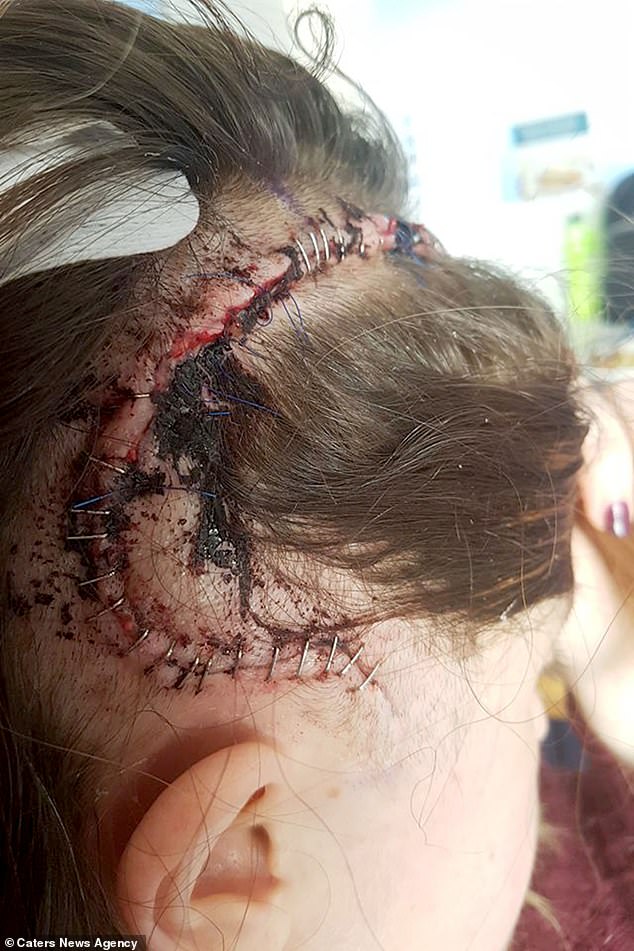 Mrs Hilborn had a seven-hour operation to remove her tumour, but it could return, doctors said

Mrs Hilborn, who is married to Rich Hilborn, 26, said: ‘I was suffering with awful migraines before I went to a local eye clinic and specialists noticed my optic nerve was swollen.

‘I was devastated but I was relieved at the same time as I’d spent years battling with constant headaches with no reason why.

‘By the time I had my MRI scan, the tumour was the size of a tennis ball.’

WHAT ARE GLIOMA TUMOURS?

Gliomas are brain tumours starting in the glial cells, which are the supporting cells in the nervous system.

There are three types of gliomas;  astrocytoma, oligodendroglioma and ependymoma.

The most common glioma are astrocytomas, which is found in the cells of the brain that support the nerve cells.

Gliomas can be low grade (slow growing) or high grade (fast growing), and doctors use these grades to determine what kind of treatment is needed.

It wasn’t until Mrs Hilborn suffered from a horrendous migraine that doctors began to run more tests.

Mrs Hilborn said: ‘I always felt like something wasn’t quite right but I began to think I was going mad.

‘After my horrific migraine I then had problems with my eyesight too. My vision would go blurry and I’d see zigzag lines.

‘After my A&E trip, I was sent away after tests were normal and told to contact my GP if the problems continued.

‘At one stage, I even joked at work and said “knowing my luck I will end up being told I have a brain tumour”.

‘I wasn’t diagnosed until around a week later after my visit to Royal Eye Infirmary at Derriford.’

It is not clear what type of glioma Mrs Hilborn had, as she said she was never told.

There are three types of gliomas, astrocytoma, oligodendroglioma and ependymoma.

Brain, other CNS and intracranial tumours is the 9th most common cancer in the UK, accounting for three per cent of all new cancer cases, according to Cancer Research UK.

Mrs Hilborn said: ‘I don’t think I’d be here today if I’d not gone when I had, my tumour was already huge.’

Mrs Hilborn underwent brain surgery on July 14, 2017, not long after the tumour was found. 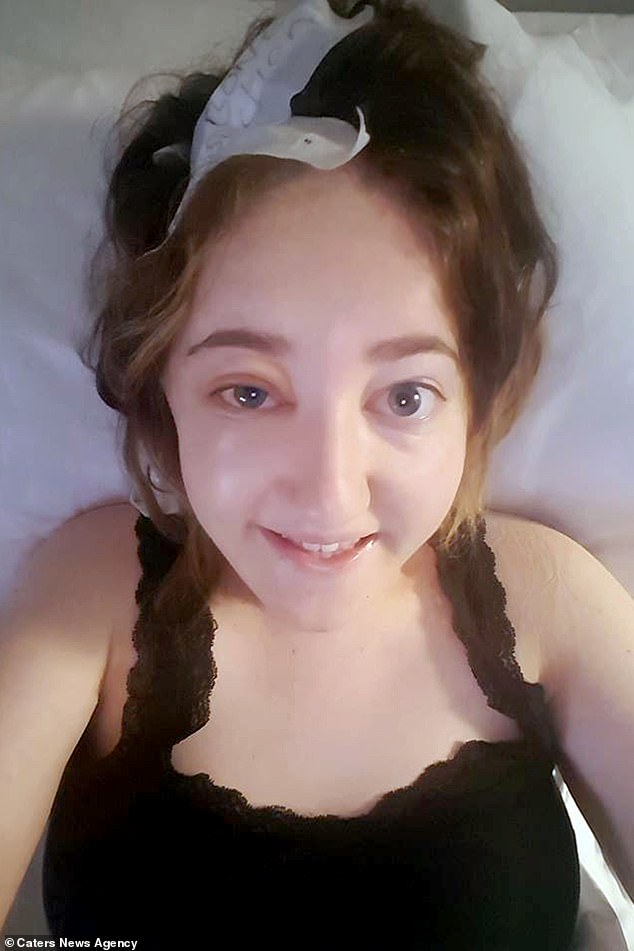 Mrs Hilborn, pictured after surgery, said specialists noticed an optic nerve was swollen in the time leading up to her eye becoming severely swollen 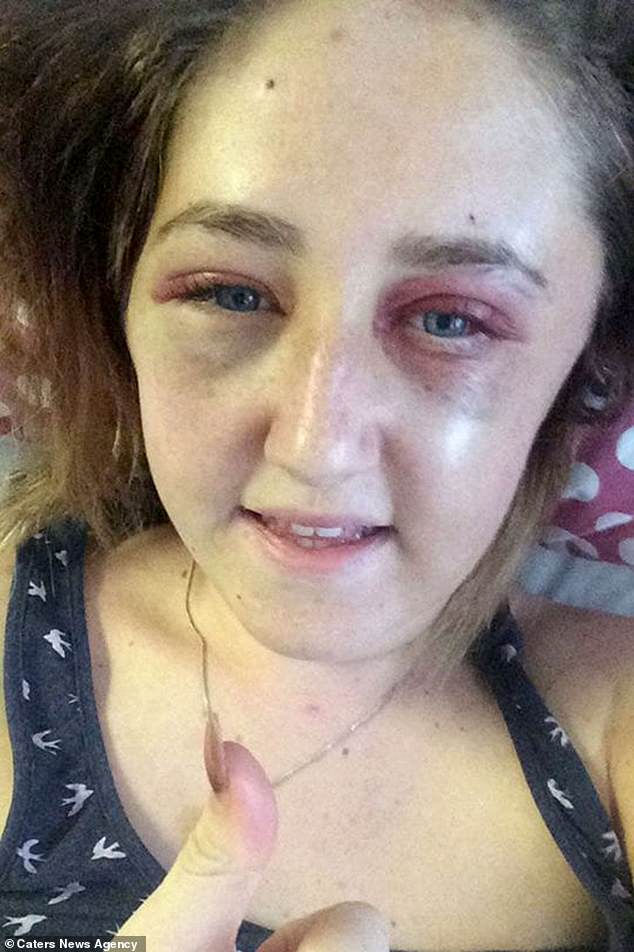 Mrs Hilborn was left with swollen eyes after the surgery, but has been in the clear for 12 months 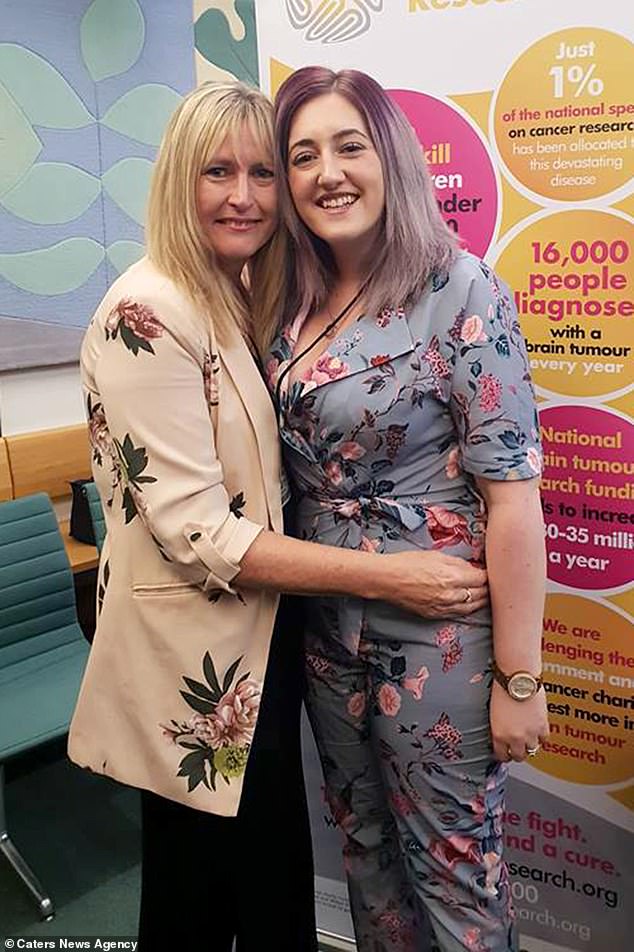 Mrs Hilborn, pictured with her mother, Sue, recently, said she is living her life to the fullest as the tumour has the potential to return 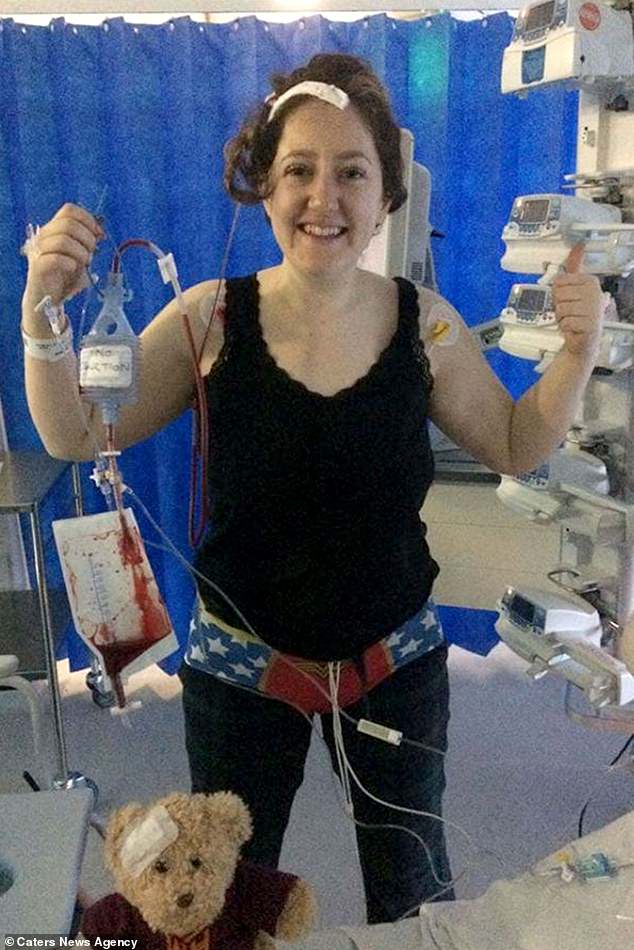 Mrs Hilborn started to think something was wrong after a migraine left her with problematic eyesight. She said: ‘My vision would go blurry and I’d see zigzag lines’

As it was stage two glioma, the whole mass wasn’t able to be removed, with the possibility it would return.

‘But it has been more than 12 months following my operation and there hasn’t been any sign of any regrowth, so I’m feeling extremely lucky,’ Mrs Hilborn said.

‘At the moment I feel very blessed, I am on cloud nine, back at work and loving living a very normal life.

‘I have a souvenir of the operation – a scar which runs from the top of my temple around my ear – but have no ill effects whatsoever and feel invincible.’

Vicki is working alongside the Brain Tumour Research charity to raise awareness of the disease, which kills more children and adults under the age of 40 than any other cancer. 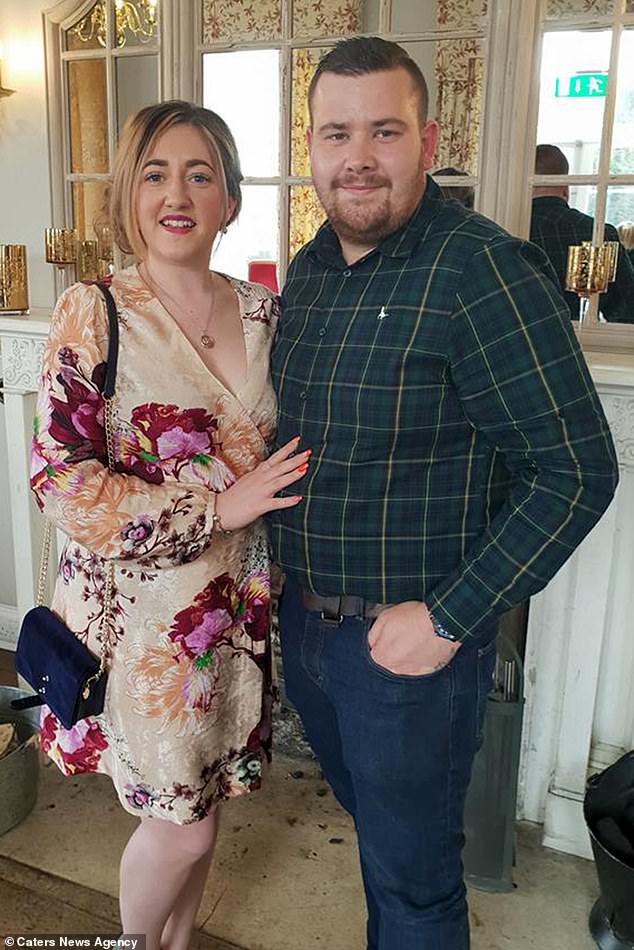 Mrs Hilborn had the support of her husband, Rich Hilborn, during the terrifying experience 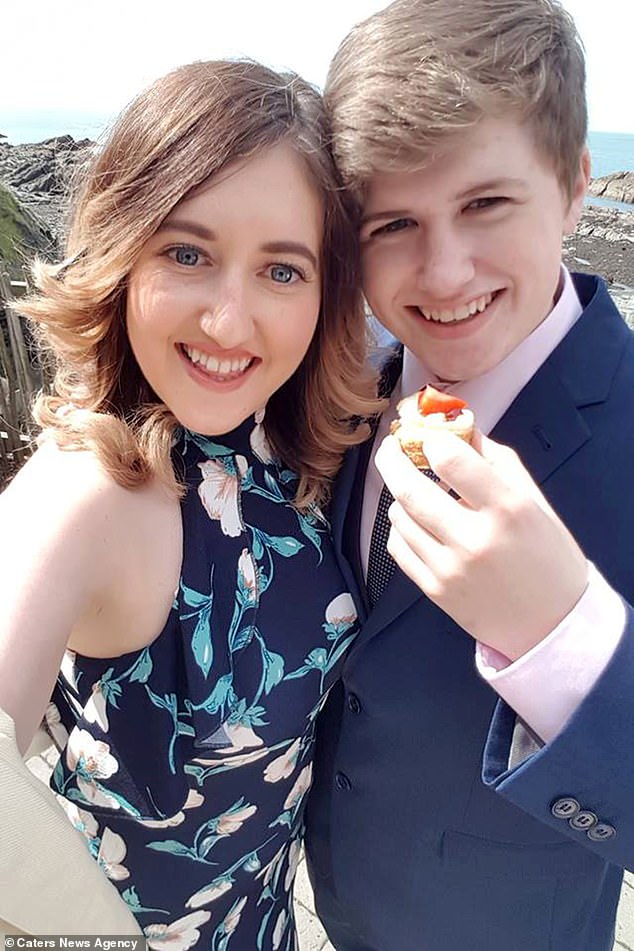 During visits to various specialists, Mrs Hilborn, pictured with her brother, Daniel, had joked: ‘knowing my luck I will end up being told I have a brain tumour’ 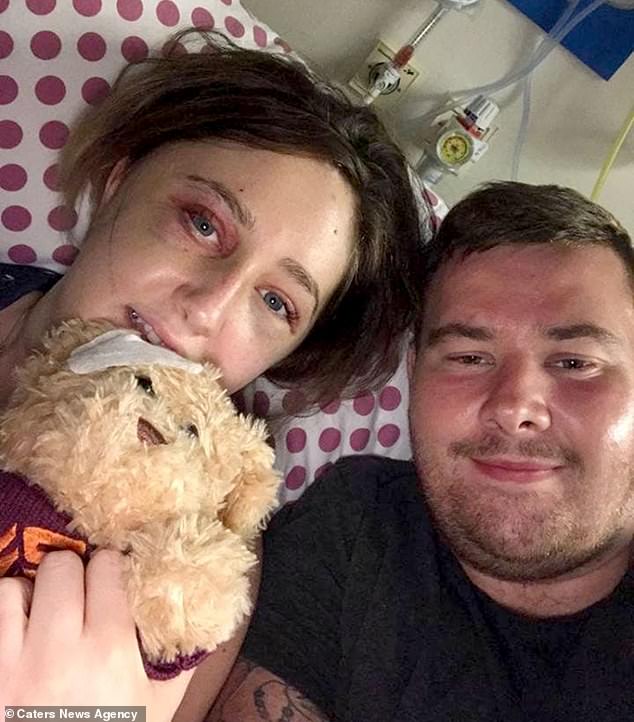 Mrs Hilborn started to think something was wrong after a migraine left her with problematic eyesight. She said: ‘My vision would go blurry and I’d see zigzag lines’

Professor Oliver Hanemann, principal investigator at Brain Tumour Research Centre, added: ‘Grade two gliomas like Vicki’s are slow-growing brain tumours and for hers to have reached the size of a tennis ball suggests it had probably been there for a number of years.

‘By its very nature neurosurgery contains an element of risk and the excision of a tumour of that size would have been extremely challenging.

‘My research is focused on understanding why these grade two gliomas tumours return after even the most successful of surgeries, and how we can develop targeted drugs to complement the surgery and stop them in their tracks.’