Hidden epidemic of sexual dysfunction which blamed on antidepressants

REVEALED: The hidden epidemic of sexual dysfunction which experts blame on SSRI antidepressants

Patients on antidepressants are not being warned of the risk that the pills could permanently ruin their sex lives, experts say.

The Mail on Sunday has been contacted by a number of patients who claim to have been left with ‘life-changing’ sexual problems after taking a class of the drugs known as selective serotonin reuptake inhibitors (SSRIs) to ease symptoms of depression and anxiety.

In the past year, about one in eight people in the UK were prescribed antidepressants, which includes SSRIs, according to the latest official figures – a number that has soared since the pandemic.

They can prove transformative for many people, but are linked with side effects. It has long been known, for example, that those taking them, both men and women, can experience a drop in libido.

But some patients claim the effects have been more persistent and have continued, or even worsened, years after they stopped taking the drugs. Some have had problems for decades.

The symptoms they describe are strikingly similar. Genital numbness – a total lack of sensation around the groin – and for men, erectile dysfunction. Both men and women experience a condition known as anorgasmia – a difficulty in reaching orgasm, and if they do climax, it is weak or without pleasure. As one woman put it: ‘It’s like a sneeze.’

Many report they no longer experience sexual or romantic attraction at all, and have been left with an emotional numbness. Most have seen relationships collapse as a result, while others have missed out on the chance to have children. Some have never experienced pleasure during sex – called anhedonia – and worry they never will. 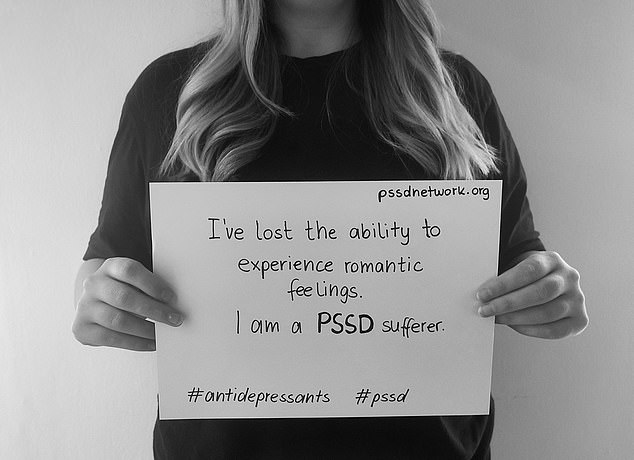 In the past year, about one in eight people in the UK were prescribed antidepressants, which includes SSRIs 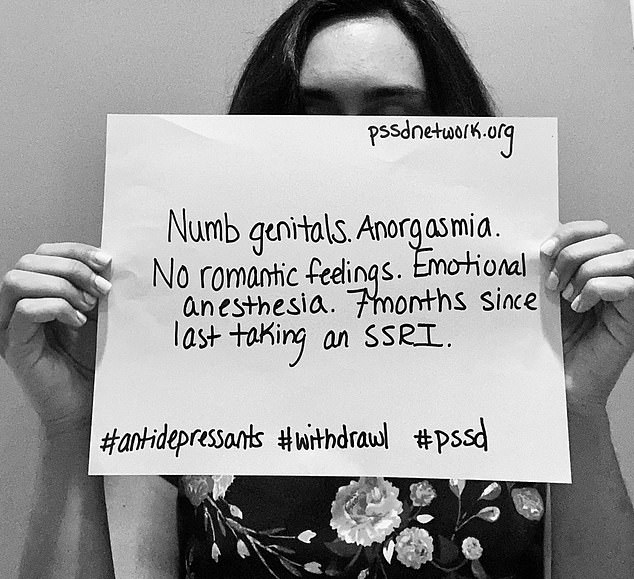 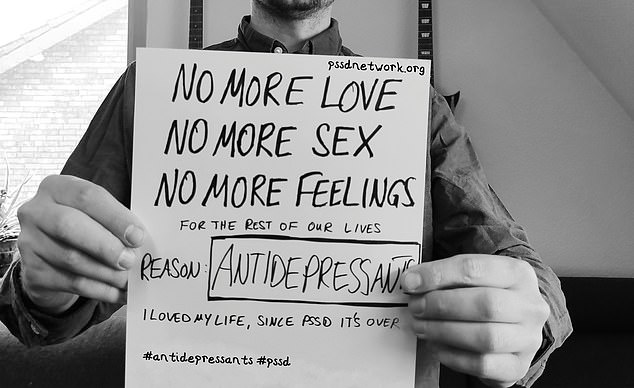 CRY FOR HELP: Powerful images from the PSSD Network’s campaign

Significantly, all have found their symptoms repeatedly dismissed by medical professionals, who insist they are linked to their underlying depression and not the pills.

One 22-year-old, a student in London, described how his problems began after he stopped taking a low dose of SSRI drug escitalopram for exam stress last year.

Speaking to The Mail on Sunday on condition of anonymity, he said: ‘My penis is basically inanimate. Any attraction I might have felt to any woman has disappeared. If I try to have sex, I might as well be doing the dishes.

‘This area of my life used to be so much fun, and now it’s a source of anxiety and has become a dark place in my head. It feels like someone has gone into my brain with a scalpel, carved some bits out and left me with this strange, numb, asexual person.

‘No doctor will even consider that it might be related to the SSRI.’

Rebecca Graham is in her early 40s and has had no sensation in her genitals for eight years since she came off the SSRI drug sertraline, which she had been prescribed for symptoms of premenstrual syndrome. She has sought help from ‘around ten specialists’, from counsellors to gynaecologists, without success. ‘My whole genital area is numb,’ she says. ‘I feel like I’ve been castrated.

‘I thought things would improve, but they never did. My partner and I live as best friends and I’ve given up on the idea of children. I’ve been told SSRIs don’t cause numbness, that no condition could explain my symptoms but that a lot of emotions control that area of the body. It’s like being gaslit by the medical profession.’

And this is the heart of the issue. While what these patients have experienced is recognised in the medical literature – and even has a name: post-SSRI sexual dysfunction, or PSSD – there is little evidence or research that proves a definitive link to the drugs.

David Baldwin, professor of psychiatry at the University of Southampton, cautioned that doctors still don’t know whether PSSD is caused by SSRIs or is a symptom of recurring depression or anxiety.

However, he added: ‘If a patient has sexual dysfunction long after stopping SSRI treatment, and this occurs in the absence of depressive or anxiety symptoms, it could be they are experiencing PSSD.’ 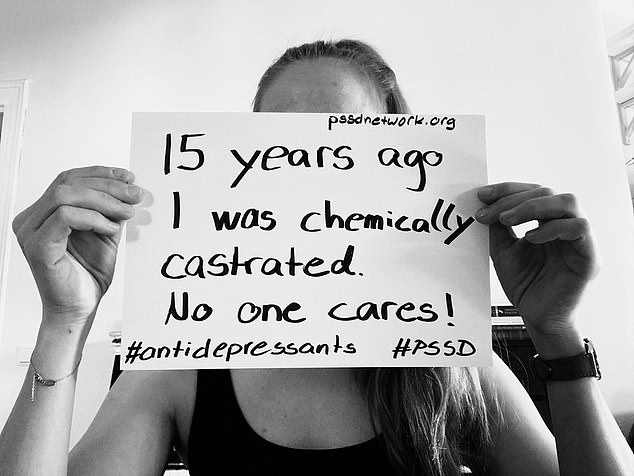 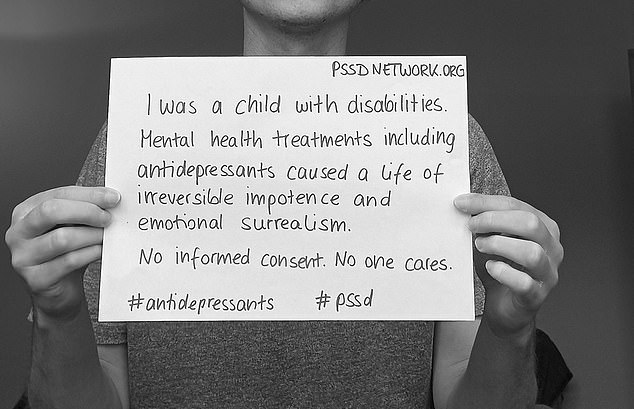 Data released last week under Freedom of Information laws by the Medicines and Healthcare Products Regulatory Agency watchdog shows that one in five of 1,762 reports of sexual dysfunction associated with SSRI use continued after stopping the drugs

Data released last week under Freedom of Information laws by the Medicines and Healthcare Products Regulatory Agency watchdog shows that one in five of 1,762 reports of sexual dysfunction associated with SSRI use continued after stopping the drugs. In fact, in 64 per cent of reports, the MHRA confirmed that it remained ‘unknown’ whether the problem had persisted.

An increasing number of experts say there is enough evidence to show post-SSRI sexual dysfunction is plausible but that further work is needed to evaluate the risks.

Dr Joanna Moncrieff, professor of critical and social psychiatry at University College London, says: ‘The majority of people taking SSRIs will get some form of sexual dysfunction – there’s no debate about that.

‘They’re prescribed to sex offenders to curb their libido, so it isn’t a huge stretch to imagine that symptoms persist.’

She adds: ‘The other thing that makes it convincing is all the evidence about prolonged withdrawal symptoms from SSRIs. If you take drugs for a long time, they alter the brain in ways that may be permanent, or at least takes a long time to normalise.’

In 2019, the EU’s drug watchdog, the European Medicines Agency, acknowledged the growing number of reports of post-SSRI sexual dysfunction, and added a new warning to leaflets inside the packaging.

A rise in the number of young people being prescribed antidepressants made these warnings ‘even more important’, Dr Moncrieff adds.

A new global pressure group, PSSD Network, launched an awareness campaign last week featuring powerful images of those suffering from the condition holding placards that describe the impact it has had on them.

One man who has taken part is Lee Edward. His placard, which partially obscures his face, reads: ‘Antidepressants saved my life… then ruined it.’

The 43-year-old, from Cannock, Staffordshire, started taking sertraline in 2017 after his father died. He experienced minor sex-related problems during the 18 months he was on the drug, but six months after he stopped taking it, in September 2019, the problem significantly worsened.

‘My penis was numb, and there was no pleasure whatsoever. Trying to have sex without those feelings of arousal was just weird. It was so awkward, just two bodies moving around.’

Blood tests and scans came back normal. Lee says his GP dismissed the idea of post-SSRI sexual dysfunction, even after being shown some academic papers. ‘If I’d gone blind, it would be obvious that something serious had happened,’ he says. ‘This is less obvious, but still has a huge impact. I’ve not had sex in three years.’

Other people contacting this newspaper include a 34-year-old woman who has spent 12 years unable to enjoy sex after being prescribed an antidepressant in her early 20s. ‘I’ve come to terms with the fact I might never experience sexual pleasure again,’ she says. Another man who developed the same symptoms after taking an SSRI earlier this year adds: ‘What I find particularly worrying is that this debilitating condition is not recognised by the medical establishment and that the wider public are not informed of the risks.

‘If I had known how profoundly the drug would affect my life, I would never have taken it.’

Professor of psychiatry David Healy, who set up the patient pressure group RxISK, has collected reports of PSSD from more than 1,000 patients, some of whom have suffered for at least 20 years. He says it appears to affect men and women equally, of any age, and regardless of the dose or duration of SSRI use.

‘While people with post-SSRI sexual dysfunction complain of lots of symptoms, including emotional numbness and brain fog, those can be caused by other things, like withdrawing from the drugs,’ he says.

‘The key to this is the genital numbness, which is quite distinctive – how do we explain why a few centimetres of tissue is affected?’

Since last year, the number of Britons taking antidepressants has risen by five per cent, from 7.9 million to 8.3 million.

Theories about the cause involve serotonin, a chemical messenger in the brain that helps stabilise mood. Some people with depression are thought to have low levels of serotonin, and SSRIs work by boosting these levels. But too much could also be causing problems, some believe.

There may be interactions between serotonin and another brain chemical, dopamine, which helps us feel pleasure, or the drugs could trigger hormonal changes in the nervous system.

The MHRA is investigating whether the acne medication isotretinoin also leads to longer-term sexual dysfunction.

Luke Davidson, who set up the patient group UK PSSD Association, said officials at the regulator had told him they might look into post-SSRI sexual dysfunction, depending on the results of the isotretinoin investigation.

‘Lots more people have this than we realise, because many go on and off the drugs and are told their problems are linked to their depression and they don’t consider the drugs,’ he says.

Luke, who is 40 and from the South of England, has personal experience of PSSD. It was, he says, ‘like a switch had been flicked’ after taking citalopram during his 20s.

‘Something I’ve noticed on the forums is a lot of young adults saying they were put on SSRIs as children or teenagers and thought that they were asexual. It’s almost as if they never developed sexuality.’ 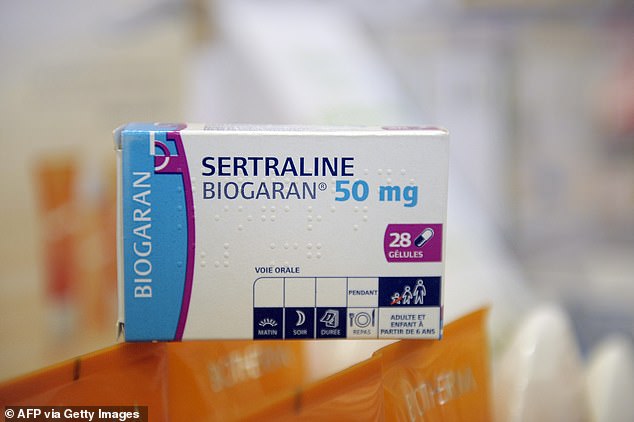 One such teenager is Isabelle Jenkins. The 19-year-old student in Wales began taking an SSRI in 2019, when she was 16, and stopped in January. ‘I can tell if I’m being touched, but there’s no pleasure to the sensation,’ she says, tearfully.

‘People tell me it’s not important, but it is. I think about it every day. I wish I’d coped with my OCD without the drugs so I’d still have my sex life. It was a high price to pay.

‘I’m young, at university, and this should be the time of my life.’

There are concerns the rising tide of SSRI prescriptions, particularly since the pandemic, means there may be more cases of PSSD. More than 1.1 million prescriptions were given to teenagers last year, compared with 823,000 five years ago. Experts have also urged people prescribed SSRIs to not stop taking the medication without consulting their doctor.

Dr Moncrieff now hopes to gauge the prevalence of the problem by studying people who have come off SSRIs. ‘The terrible thing is it’s so hard to get this kind of research funded,’ she says. ‘There is endless research on new treatments but no one will fund research on worrying and potentially harmful effects of substances.’

As sufferer Rebecca Graham says: ‘If you tell your GP, “This SSRI is amazing, it’s changed my life”, they’ll believe you. If you say “This has ruined my life”, they tell you you’re wrong.

‘Can all of us really be wrong?’