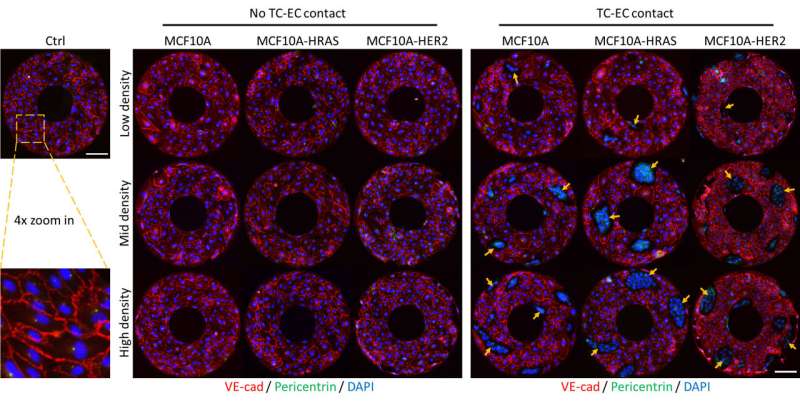 Preventing metastasis—the development of cancer cells beyond their original location—remains one of the major goals of current cancer research. Most malignant tumor cells metastasize by exploiting abnormal leakage from blood vessels. New work looks to further explore the role of how the alignment of endothelial cells, which line blood vessels, plays a role in the spread of cancer.

“The blood vessels in tumor tissues are much leakier than those in normal tissues,” said author Jie Fan. “We are curious whether the tumor cells can induce the weakening in the clockwise orientation of endothelial cells and cause them to disorganize in the vessel.”

The work expands on recent findings that showed that endothelial cells have chirality, a type of mirrored-image orientation similar to right and left hands, and they tend to skew in a clockwise direction.

“We believe the strong clockwise chirality of endothelial cells is important to maintain blood vessel integrity, but unfortunately, it could be damaged/weakened by tumor cells, which may increase the risk of metastasis,” Fan said. “Preserving the normal chirality could inhibit tumor transmigration by reinforcing the chirality and the integrity of the endothelial barrier of blood vessels.”

To address the question, the group co-cultured HUVECs with a series of tumor cell lines with varying degrees of malignancy. They then compared how HUVECs responded when the tumor cells were directly touching them versus not. To exert such a degree of control, they employed a contact printing technique to create either donut- or figure-eight-shaped micropatterns to hold the cells.

The group was surprised by the movement of the cell types. In most models for metastasis, it is thought that tumor cells march toward blood vessels before breaking through into the bloodstream.

Fan said regulating this interaction holds promise for better controlling cancer metastasis and he hopes to work further on developing therapeutics toward this end.