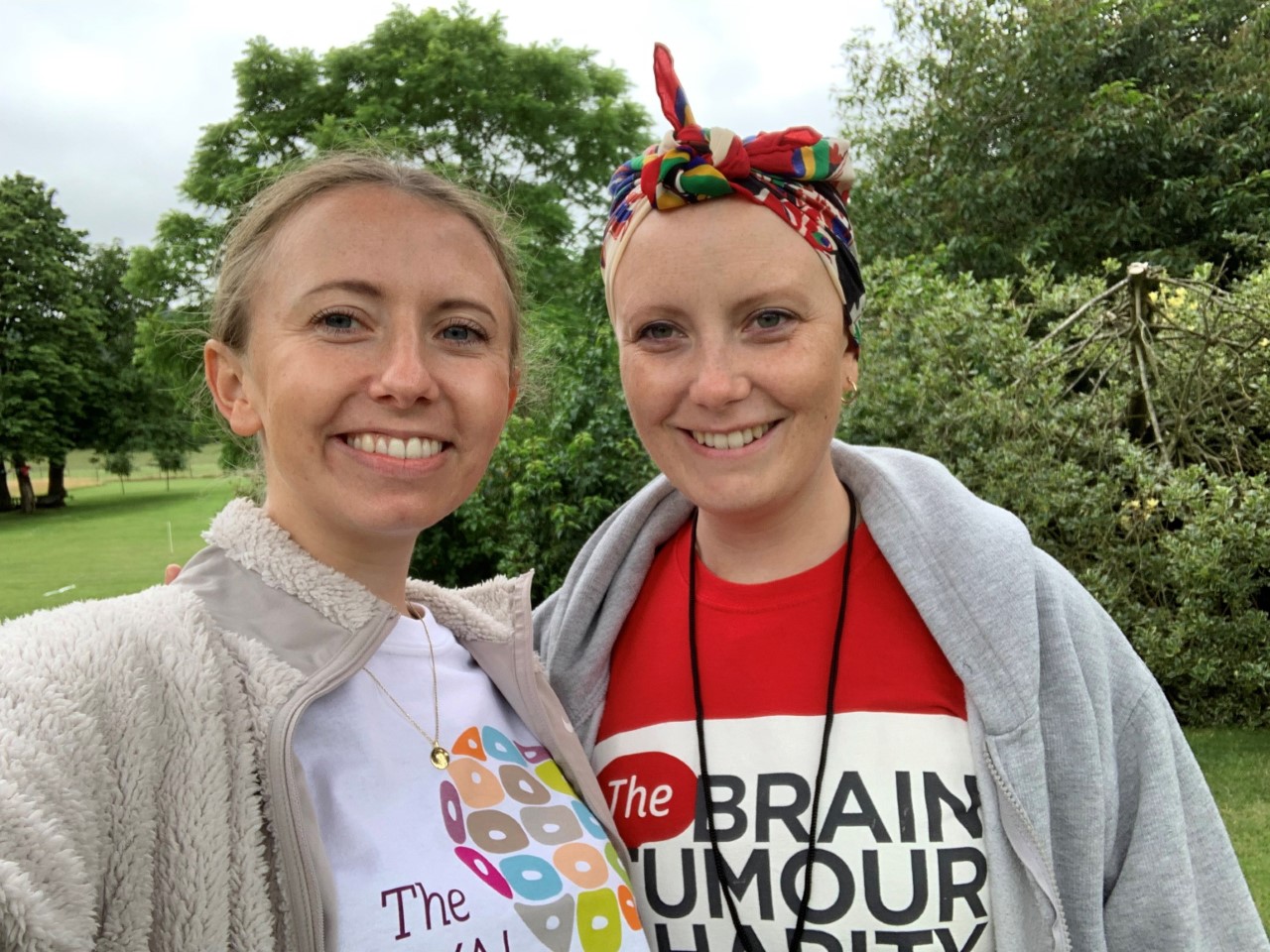 In May 2017, my older sister Harriet (Harry, to me) was diagnosed with a primary high grade medulloblastoma — a rare brain tumour in adults.

She was just 27 years old at the time.

She had been having headaches for around six months, which had been getting progressively worse. Initially she thought they may be migraines, which do run in our family, but Harry noticed that they got worse when she was moving, lifting things or exercising.

Harry went to the doctor and she was given migraine medication as well as a referral for an MRI to be carried out in a few months. However, with a family holiday coming up, she decided to have a private scan instead.

The specialist called her just hours after she had the scan and told her to go to Hammersmith A&E by taxi – not the tube.

They told us they had found a tumour on Harriet’s brain.

Throughout her illness she was fiercely brave, taking on every single treatment that was thrown at her. Following her initial brain surgery, she had daily chemotherapy and radiotherapy, which we would drive to — we’d then watch Love Island in bed together afterwards.

Focusing on mundane daily tasks helped us get through these days as we appreciated the special time together more than ever. She had such a positive attitude in those first months and she made friends with so many nurses at the Royal Marsden Hospital that it was easy to forget that she had a Grade 4 brain tumour.

I think we once counted that she’d had a total of nine operations, hundreds of IV chemo sessions, 45 radiotherapy sessions, 485 days of oral chemo, cyberknife, targeted drug therapies and 12 platelet transfusions.

Whatever they suggested for her, she tried it and she never once complained, either.

Initially, things looked promising. As Harry celebrated her 28th birthday, her chemotherapy came to an end with the confirmation that there was no evidence of any tumour remaining in her brain.

But just six months later, Harry found a lump in her neck.

Her GP said it was likely to be a reactive lymph node due to her treatment. But a routine check-up with her oncologist and follow-up surgery found that the medulloblastoma had spread.

This awful news — that the cancer had returned and Harry would need more cancer treatment — came just two days before Christmas.

Primary brain tumours rarely spread outside of the central nervous system but that’s what had happened.

Harry had surgery to remove 160 lymph nodes from her neck. But scans after the surgery also showed that the cancer had spread elsewhere too and so she needed a variety of chemotherapies to try and keep the cancer at bay.

Just a few days after Harry was first diagnosed, my brother Henry, Harriet and I decided to set up a supporter group for The Brain Tumour Charity and raise funds to plough into research on high grade brain tumours.

The organisation is the world’s leading brain tumour charity and the largest dedicated funder of research into brain tumours globally. It is because of Harry’s specific tumour type, how brain tumours generally rarely spread, and how Harry’s tumour type doesn’t often present in adults that we wanted the money we raise to be funnelled directly into this specific area of research.

We need to know more about this devastating disease.

Many friends got on board to raise money too and they have run triathlons and marathons, held art auctions, bake sales and cycles all to help our fundraising and support The Brain Tumour Charity.

But in June 2020, we had the news that every cancer patient and their family dreads: we were told that Harry’s treatment was no longer working.

Harry was so pragmatic when we received bad news. She would instantly start planning a social or charity event to raise more money. I think this was a distraction but also knowing that she had limited time left spurred her on to squeeze every ounce out of life that she could.

We spent the following year together as a family eating delicious food, drinking wine and making the most of the time we had left.

Harry’s fierce willpower and determination in the way she approached her illness and death is something I will never fail to be in awe of.

Looking after her at home in the months before she died was hugely traumatic and yet also an incredible privilege. Her attitude and perspective on life has influenced me enormously and changed the way that I view things forever. One of the final things she did was make donations to the two hospices who helped to look after us at home — even then she didn’t stop thinking of others.

Life is never to be taken for granted. Harry’s stoicism and intense bravery enabled us to care for her with minimal support from others, having nurses only come in once or twice a day to administer pain relief.

We all moved home during this time and we took an extended time off work to be with her. It meant we were able to spend 24/7 together as a family, watching ridiculous TV programmes, laughing together, crying together and bonding in ways only those who have been through this type of care will understand.

It was a constant source of hope and positivity for all of us that our fundraising would hopefully help others — and for Harry, that she was leaving something behind in The Harriet Downing Fund: a dedicated fund which is looked after by The Brain Tumour Charity to specifically raise money and awareness in Harry’s name.

We have so far raised over £230,000 for The Brain Tumour Charity with plans to raise much more. It is with great pride that Henry and I, along with our mum, carry on Harry’s fundraising legacy and continue to spread awareness, spurred on by our unconditional love for Harry and with her voice in our heads telling us that we must not give up! She is our inspiration and always will be.

Harry was a force of nature. She had an infectious personality and she was the kind of person you meet and become friends with instantly. Her energy was brighter than anyone else in the room. She had a way of caring so deeply about those she loved and, at the same time, being brutally honest and telling everyone exactly how she saw the world.

She was always unapologetically herself and I was lucky enough to have her as my older sister and my best friend.

We recently celebrated what would have been Harry’s 32nd birthday with a group of her friends at a Thai restaurant in Clapham — a place Harry loved and where she often chose to celebrate her birthdays.

When I went in to pay the deposit, the owner asked if it was for a birthday. I replied yes, it’s for my sister Harriet’s birthday, to which she replied: ‘HARRIET! What an amazing girl!’. She didn’t know that Harriet had passed away.

Similarly, I had a message on Instagram a while ago from a lovely lady who we took a pottery class with last year. She said: ‘Harriet was an incredible soul who had a big impact on me after that short three-hour class. I still talk about her and her fearless, strong and ambitious outlook she had on life.’

It really is impossible to say how many lives she touched and how much joy she brought to so many people. Considering her relatively short life, I’d say this is quite an achievement. I hope I continue to have these encounters with strangers who tell me how hilarious, generous, determined and kind my sister was.

Just 12% of people survive a brain tumour diagnosis for more than five years.

While there have been some encouraging steps forward in both research and care in recent years, progress isn’t happening fast enough. There needs to be greater investment in world-class research, to help diagnose the disease earlier and to better understand the causes and find new treatments in order to give those affected hope of more time to live and a better quality of life.

The Brain Tumour Charity is determined to invest another £40m in forward-thinking research over the next five years to help double survival and halve the harm the disease causes. In the meantime, it provides vital help and support for people affected by brain tumours and the huge mental as well as physical trauma they can cause.

It’s now five years since my beautiful sister Harriet was diagnosed with the brain tumour, which she would then die from when she was just 31 years old. It’s difficult to put into words the humongous hole she has left behind in our lives. Despite knowing she was terminally ill for a long time before she died, nothing can ever prepare you for losing someone you love so much and have never known your life without.

One day, there will be a cure and countless other patients and families will face a very different outcome.

However, in the meantime, each donation is a step towards not only the end goal, but a helping hand along the way for each and every family affected.

I wanted to share my sister’s story in the hope that it may help other families going through this, and to encourage people to consider donating to help fund research.

Harriet lives on in all of us in the way we approach our lives and in the ways we try to celebrate the ordinariness of life, knowing that we won’t be around forever. We hold those we love tight, in the way she taught us best, and remember the phrase she always used to say: ‘We are here for a good time, not a long time’.

Harriet documented her experiences on Instagram @ThatCancerLife. You can also donate to The Harriet Downing Fund here.  For more information visit: https://www.thebraintumourcharity.org/