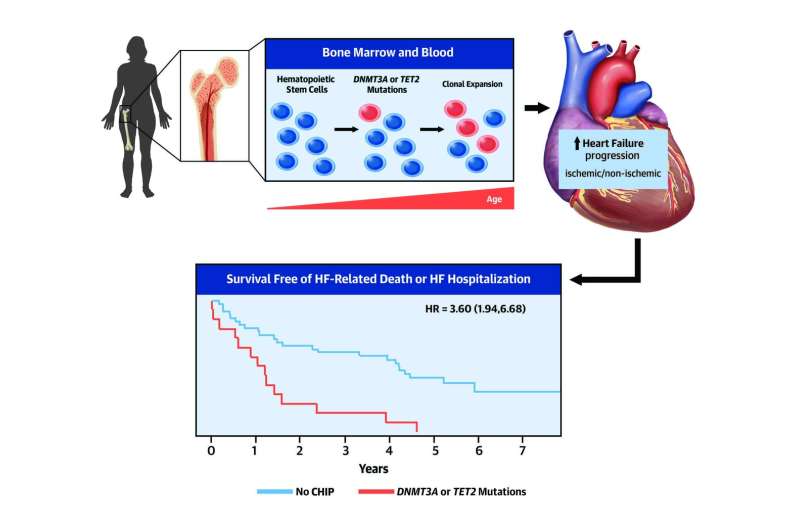 The adult human body produces hundreds of billions of blood cells every day. This essential process unavoidably leads to the appearance of mutations in the DNA of the progenitor cells. These are known as somatic mutations because they are acquired, not inherited. While most of these mutations are innocuous, occasionally, a mutation gives affected cells a competitive advantage that allows them to expand progressively, generating clonal populations of blood cells. This phenomenon is known as clonal hematopoiesis.

Now, a team of scientists at the Centro Nacional de Investigaciones Cardiovasculares (CNIC) and the Hospital Universitario Virgen de Arrixaca in Murcia has discovered that the presence of these acquired mutations in blood cells increases the risk of rapidly progressing heart failure, one of the chief causes of death in the world.

Clonal hematopoiesis is linked to aging, because over time there is an increasing chance that a culprit mutation will be produced, explained Dr. José Javier Fuster, coordinator of the study published today in The Journal of the American College of Cardiology (JACC). “Recent studies showed that people with clonal hematopoiesis have a higher risk of developing hematological cancers and dying. Curiously, however, the death of these patients is often due not to the cancer, but to cardiovascular causes.”

This new discovery has stimulated great interest in the possibility that clonal hematopoiesis might contribute to the increase in cardiovascular risk associated with aging.

Heart failure is the main cause of hospitalization among people older than 65 years and is a major cause of morbidity and mortality.

“There is established evidence linking clonal hematopoiesis to an increased risk of atherosclerosis, the underlying cause of most heart attacks and a high proportion of strokes,” said Dr. Domingo Pascual-Figal, an external investigator at the CNIC and a cardiologist at the Hospital Universitario Virgen de Arrixaca in Murcia.

Earlier experimental studies by CNIC scientists had also demonstrated that certain mutations that cause clonal hematopoiesis accelerate the development of atherosclerosis and the progression of heart failure symptoms in mice.

In the new study, which included input from the CNIC Genomics and Bioinformatics Units and investigators at Hospital Universitari Germans Trias i Pujol in Badalona (Barcelona), the research team analyzed how the presence of mutations linked to clonal hematopoiesis affects the clinical progression of patients with ischemic or non-ischemic heart failure.

The scientists monitored the genomic DNA sequence of blood cells from the heart failure patients over many years to detect the presence of clonal hematopoiesis and assess its possible connection with the progression of their disease.

Commenting on the results, Dr. Fuster said that, independently of the origin of heart failure, “the presence of these mutant blood-cell clones aggravates disease progression and worsens prognosis.”

Dr. Pascual-Figal explained that the specific study finding was that “clones with mutations in 2 genes frequently linked to clonal hematopoiesis, TET2 and DNMT3A, were associated with a higher risk of heart-failure-related hospitalization and death.”

For the researchers, these findings “demonstrate the importance of clonal hematopoiesis as a pathogenic process that accelerates and aggravates heart failure progression, independently of the presence of atherosclerosis.”

The authors conclude that their study supports the emerging idea that “clonal hematopoiesis represents a new cardiovascular risk factor and an important link between aging and cardiovascular disease.” The results, moreover, “open the way to the development of personalized therapies for patients with these somatic mutations, with the aim of preventing heart failure progression.”