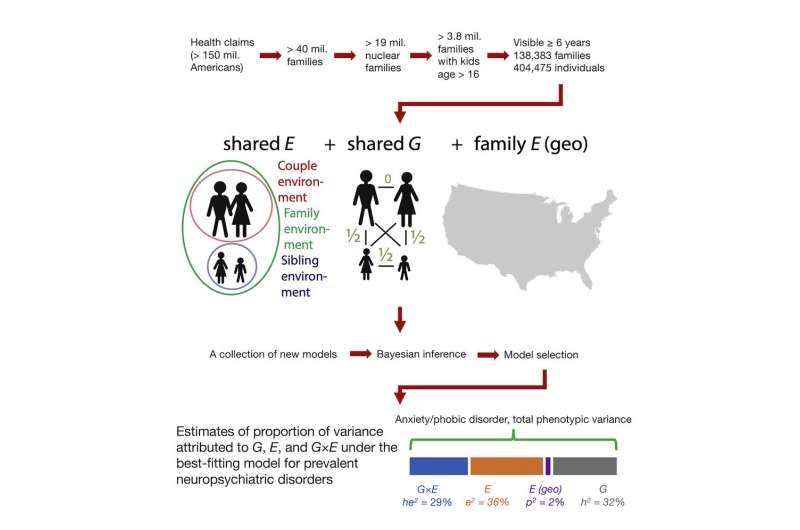 While some diseases and disorders can be easily attributed to specific genetic mutations, for many diseases—especially neuropsychiatric ones—the causes are much more complicated, influenced by both genetic and environmental factors. A new study at the University of Chicago examined data from over 400,000 individuals to better understand how those two factors play into the variations seen in a number of neuropsychiatric disorders, with the hope of eventually identifying ways that individuals who are at risk can modify their environments to protect their mental health. The research was published on September 6 in Cell Reports Medicine.

“We’ve known for a long time that environmental factors have a great impact on neuropsychiatric diseases, so we wanted to look at how environmental factors interact with genetic ones,” said Hanxin Zhang, Ph.D., first author on the study and a research assistant at UChicago. “Our lab has access to the data for millions of people and their family relationships, which helps us to model shared genetic factors between family members, as well as shared environmental factors.”

The researchers used a database with health information from over 100,000 U.S. families to model those genetic factors, and linked it together with environmental data from the EPA through the ZIP codes and counties that the individuals and families had lived in.

According to their models, gene-environment interactions account for only a small portion of the variations seen in the rates of some psychiatric disorders, such as depression and substance abuse. Other disorders, however, showed that gene-environment interactions accounted for a much larger proportion, including attention-deficit/hyperactivity disorder (ADHD), anxiety/phobic disorders, recurrent headaches, sleep disorders and post-traumatic stress disorder (PTSD).

These results demonstrate the importance of considering not just an individual’s genetic background, but also their environmental exposure history.

“Genetics is viewed by many people as something like a verdict—you can’t change it,” said Andrey Rzhetsky, Ph.D., Edna K. Papazian Professor of Medicine and Human Genetics and senior author on the study. “Finding these gene-environment interactions give us hope that we can find some genetic variance that interactions with the environment, so that ideally, you could change your environment and escape the disease.”

For example, if a patient were to have a gene that put them at increased risk of migraines when exposed to hot climates, a physician might suggest they ensure that they have air conditioning in their home and avoid the heat.

These kinds of studies are typically challenged by a lack of sufficient data, particularly when it comes to environmental data. “Environment is not well defined,” said Atif Khan, Ph.D., a staff scientist at UChicago. “And it’s massive. You could potentially measure billions of different environmental details to determine what’s important.”

The researchers also pointed out that environment can include more than simply the molecules measured by the EPA in the air, water and soil. “In this study, we’re looking specifically at living environments and environmental exposures, but an individual’s personal experience is also a kind of exposure,” said Zhang. “Especially when you are considering psychiatric diseases. For example, understanding the interactions children have in school would be very important, but it’s very, very difficult to collect this data on a large scale.”