Is the trendy Keto diet BAD for you? 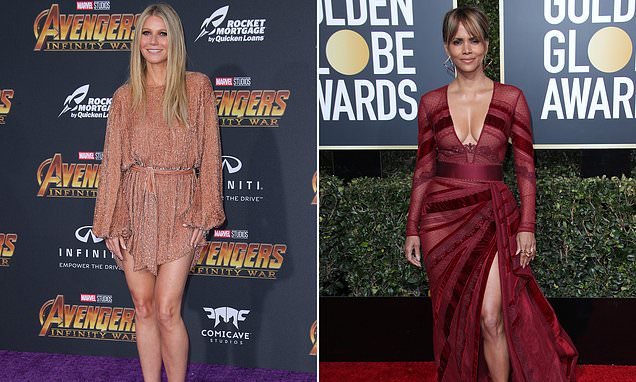 Is the trendy Keto diet BAD for you? High-fat eating plan ‘increases blood pressure in weeks’ as scientists warn its harmful effects have been ‘underestimated’

The Keto diet has been praised by countless celebrities for helping them get ‘red carpet ready’.

Tests on mice showed following the diet raised the blood pressure of the rodents after just four weeks.

Experts are now warning the dangers of the diet – which puts the body in a state of ‘ketosis’ so it burns fat for energy – have been ‘underestimated’.

Gwyneth Paltrow is said to to be a fan of the Keto diet. The Shakespeare in Love actress is pictured left at the Avengers: Infinity War’ premiere in LA on April 23 last year. Halle Berry (pictured right at the Golden Globe Awards on Sunday) also follows the high-fat eating plan

The research was carried out by Augusta University, and led by pharmacologist and physiologist Dr Jennifer Sullivan.

Around a third of adults in the US have high blood pressure, of which two-thirds of cases can be attributed to being overweight, the authors wrote in the American Journal of Physiology, Heart and Circulatory Physiology.

And hypertension – the medical term for high blood pressure – affects more than one in four people in the UK, Government statistics reveal.

Hypertension causes a gradual increase in the pressure of blood flowing through the arteries. This damages their inner lining, and can lead to blood clots that rupture and result in internal bleeding.

It also prevents oxygen-rich blood reaching vital organs, which can cause heart disease, stroke, kidney failure and even erectile dysfunction.

‘To me [the study] really highlights the importance of understanding what you are eating,’ Dr Sullivan said. ‘I think we may be underestimating how bad a consistently high-fat diet is for us.’

The researchers analysed the effects of a high-fat diet on Dahl rats, which are bred to be hypersensitive to salt.

The male rodents in particular have been shown to have significantly high blood pressure after eating a salty or fatty diet, however, until now, female Dahl rats had not been studied.

To test whether the Keto diet has a similar effect on female rodents, the researchers fed both males and females either a normal or high-fat diet for four weeks.

WHAT IS THE KETO DIET?

The Ketogenic diet defines a low-carb, high-fat way of eating.

Following this eating plan forces the body into a metabolic state, known as ketosis, which starves the body of carbohydrates but not calories.

Carbs are shunned in the keto diet as they cause the body to produce glucose, which is used as energy over fat.

Keto diets therefore lead to weight loss as they make the body burn fat as its primary energy source.

On the diet, followers can eat:

‘You have a lot of people consuming high-fat diets and we don’t know enough about what effect it’s having on females,’ Dr Sullivan said.

‘Since women are more likely to be obese than men and the association between increases in body weight and blood pressure is stronger in women, we wanted to see if the same response occurs in the female as well.’

In the normal diet, 7.2 per cent of the rats’ calories came from fat, compared to 36 per cent in the high-fat eating plan. The salt levels of both diets were ‘normal’.

All of the rodents had their blood pressure measured before and after the experiment, with levels rising in the rats fed the high-fat diet regardless of their sex.

But blood pressure was still higher in the male rodents.

This differs from past studies that showed only male Dahl rats saw their blood pressure rise after eating a salty diet, which may be due to genetic differences.

Perhaps unsurprisingly, the high-fat diet caused significantly greater weight gain in both male and female rats compared to the normal eating plan. Cholesterol and blood sugar levels stayed the same in both sexes.

Once the study ended, the animals were put down so their tissue could be examined.

Results revealed the fatty diet increased the number of immune cells in the aorta – the largest artery in the body – and the kidneys of both male and female rats.

Kidneys play an ‘important role in the long-term regulation of blood pressure,’ the authors wrote.

These immune cells can drive inflammation, which is associated with hypertension.

Although it is concerning that the Keto diet may raise blood pressure, past studies have found a high-fat diet does not cause hypertension in other rat breeds until up to 32 weeks in.

The researchers also did not measure how the different diets affect fat distribution, with fat that surrounds the organs being more dangerous than that which lies beneath the skin.