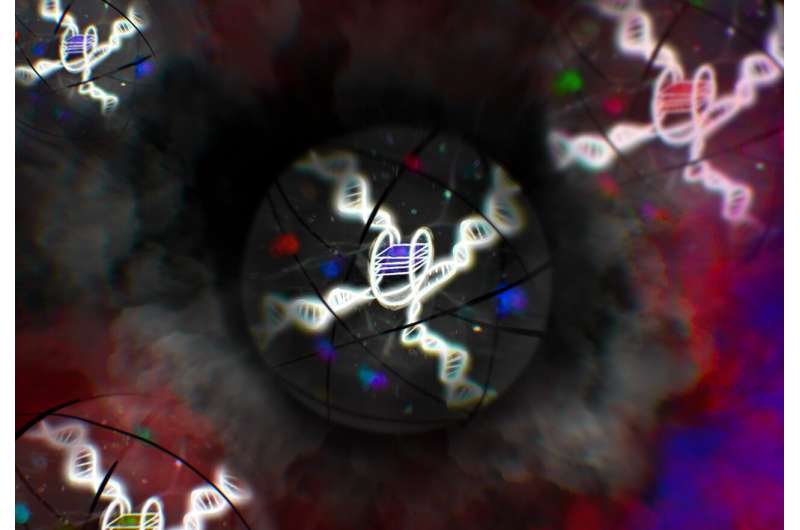 A special form of four-stranded DNA, recently seen in human cells, has been found to interact with a gene that causes Cockayne Syndrome when faulty.

As well as the classic double-helix, researchers have recently discovered a whole host of other DNA strand configurations, including quadruple-helix DNA, which forms knot-like structures called G-quadruplexes.

Now, researchers from the Molecular Science Research Hub at Imperial College London have observed a protein called Cockayne Syndrome B (CSB) preferentially interacting with one specific type of G-quadruplex. These special G-quadruplexes arise when distant parts of DNA interact, something that researchers thought was impossible to form within cells.

Normally functioning CSB proteins do not cause any ill effects, but mutations of the gene that produce CSB protein can cause the fatal premature aging disorder Cockayne Syndrome, which kills many sufferers before adulthood.

The team found that CSB proteins with mutations that cause Cockayne Syndrome are no longer able to interact with the long-range G-quadruplexes. While we don’t yet know why this might be, the team’s results, published today in the Journal of the American Chemical Society, suggest that these long-range DNA G-quadruplexes are specifically linked with the functional role of CSB.

Lead researcher Dr. Marco Di Antonio, from the Department of Chemistry at Imperial, said: “Our genomic DNA is more than two meters long, but is compressed into a space only a few microns in diameter. It shouldn’t therefore be a surprise that there are ways the long-range looped structures are leveraged to compress DNA in more complex interactions than we imagined. 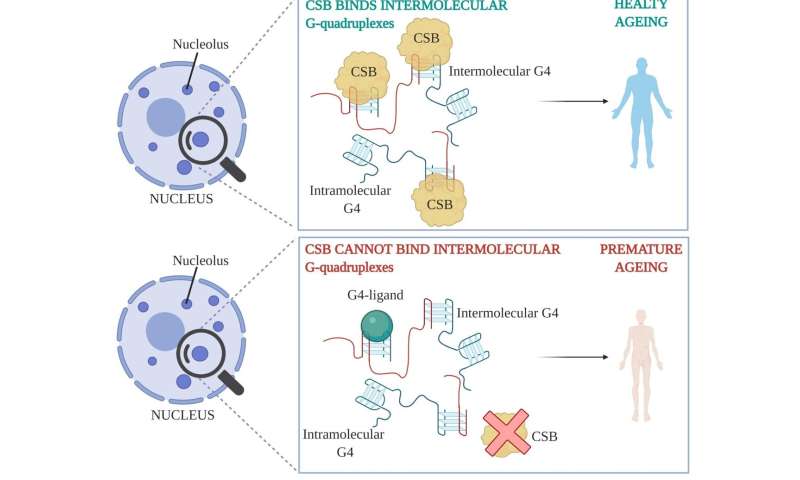 “There is still so much we don’t know about DNA, but our results show that how and where G-quadruplex structures form affects their function, making them more important biologically than previously thought.”

DNA strands are incredibly long and are wound in tight structures to fit inside our cells. Previously, researchers had assumed that G-quadruplexes form only from regions of DNA that sit next to each other. However, the team discovered G-quadruplexes that are formed from parts of the DNA strand that are spatially distant one from the other.

Exactly what the interaction results in is yet to be determined, but previous independent research found that cells without CSB have difficulty processing the DNA around sequences with the potential to form G-quadruplexes.

The Imperial team have now found that the mutated form of CSB that causes Cockayne Syndrome is specifically attracted to G-quadruplexes that link distant DNA portions. This could mean further study of the mutated CSB gene might reveal the specific biological function of these long-range DNA structures.

Next, the researchers want to image the G-quadruplexes and the functional CSB gene bound together to determine exactly what the relationship does: whether the CSB helps the G-quadruplex hold the two distant regions of the DNA together, or whether CSB actually initiates the break-up of G-quadruplexes once they have completed their function, or a combination of both.

First author of the study Denise Liano, from the Department of Chemistry at Imperial, said: “There is currently no cure for Cockayne Syndrome.

“But with further study into how G-quadruplexes and the gene behind Cockayne Syndrome interact we can learn details that will hopefully allow us to discover therapeutic tools, such as designer molecules that can regulate the interaction and fight back against the premature aging caused by the disease.”