Man, 73, needed part of his bowel removed after a 2cm-long fish bone he accidentally swallowed perforated his intestine

A man needed to have part of his bowel removed after a 2cm-long (0.7inch) fish bone pierced his small intestine.

The unnamed 73-year-old, who lived in Japan, went to hospital complaing of a severe pain in his abdomen.

A scan revealed a ‘linear body’ had penetrated his small intestine. Surgeons later confirmed it was a fish bone.

The man recalled eating yellowtail fish the day before his pain started, doctors who treated him revealed in a case report.

He had the affected part of his bowel removed and was home eight days later. 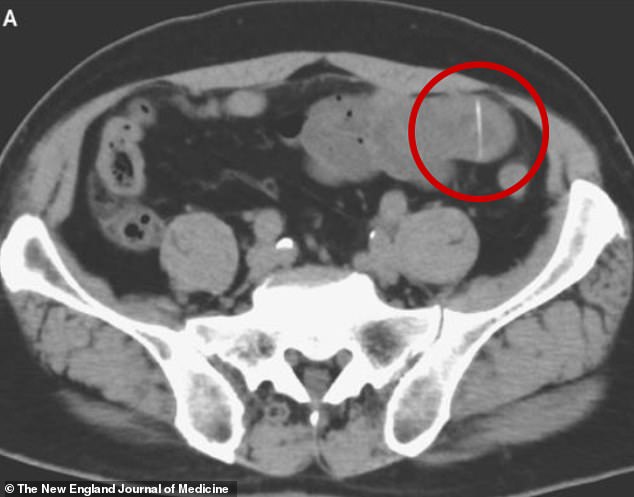 An unnamed 73-year-old went to hospital with severe abdominal pain. A scan revealed a ‘linear body’ (circled) had penetrated his small intestine. Surgeons later confirmed it was a fish bone

The man arrived at Kochi Medical School in Nankoku, Japan, complaining of severe pain in his lower abdomen.

Tests revealed he had a fever and slightly raised blood pressure. His heart rate was normal at 77 beats per minute (bpm). Sixty-to-100 bpm is normal for a resting adult.

When he was physically examined, the man complained of tenderness across his lower abdomen.

Small bowel resection surgery involves removing part or all of the small intestine when it becomes blocked or diseased.

The gut is filled with a harmless gas that makes it expand.

Doctors then locate and remove the damaged area.

Open surgery follows the same procedure but a larger cut is made.

If there is enough healthy small intestine remaining, the ends will be stitched or stapled together.

If there is not, surgeons will make an opening called a stoma through the skin of the abdomen.

This allows faeces to collect outside of the patient’s body.

A scan revealed the wall of his gut had thickened and was penetrated by a ‘linear, high-density body’, the medical team wrote in The New England Journal of Medicine.

A surgical incision to his abdomen led to the fish bone being discovered.

The man underwent a small bowel resection to remove the damaged part of the intestine.

He was treated with antibiotics to prevent infection.

The surgery was a success and the man was sent home eight days later.

Accidentally swallowing a fish bone is the most common cause of ‘GI tract perforations’, according to a 2014 paper in the World Journal of Gastroenterology.

However, less than one per cent of ‘ingested foreign bodies’ tear the intestine, Live Science reported.

‘The intestine has a remarkable ability to protect itself against perforation,’ the scientists wrote.

When pricked, the affected part of the bowel becomes concave and deprived of oxygen, which encourages the offending object to ‘dislodge’.

The flow of food through the intestine and relaxation of the bowel wall also usually causes lodged objects to loosen.

However, fish bones have good ‘grip’ due to their sharp tips. This causes the tissue in the gut wall to die, leading to a ‘mucosal band around the fish bone that hooks it’ on.