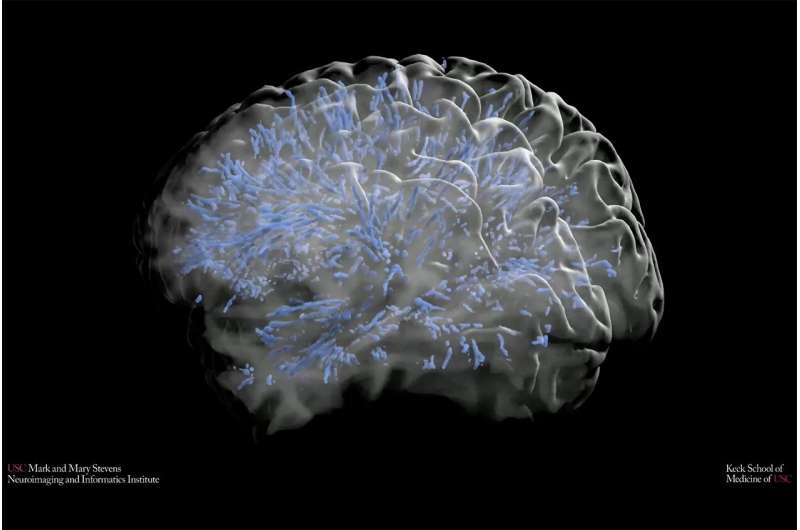 Until recently, scientists didn’t know much about perivascular spaces (PVS), fluid-filled regions in the brain involved in clearing waste and toxins—mainly because it’s tough to get a clear look at them using neuroimaging. But as technology evolves, researchers are finding that PVS may play a central role in brain changes associated with aging, including in neurodegenerative disorders such as Alzheimer’s disease.

This winter, the USC Mark and Mary Stevens Neuroimaging and Informatics Institute (USC Stevens INI) is launching a comprehensive, five-year, $1.4 million study to map PVS across the lifespan and to understand the role they play in brain function. The project, led by Farshid Sepehrband, Ph.D., assistant professor of research neurology at the Keck School of Medicine of USC, is part of the BRAIN Initiative, a National Institutes of Health-led public-private partnership that aims to develop and apply innovative technologies to revolutionize the study of the human brain.

“Since its launch in 2013, I’ve closely followed the discoveries and advancements from the BRAIN Initiative,” Sepehrband said. “I’m honored and excited to count myself among its investigators and to contribute to this global scientific effort.”

The new study builds on decades of work by the USC Stevens INI and its Laboratory of Neuro Imaging (LONI) to map the human brain in health and disease. That work includes co-leading the Human Connectome Project (HCP), a revolutionary brain mapping effort to characterize pathways, circuits, regions and functions. Sepehrband will use computational and analytic methods that he has developed to obtain new insights from HCP data.

“Mapping the intricacies of the human brain is a crucial task that provides the foundation for life-changing research on development, diseases and interventions,” said Arthur W. Toga, Ph.D., Provost Professor at USC and director of the USC Stevens INI and LONI. “The new effort is an important step in advancing our knowledge of the brain’s structure and function.”

Mapping PVS across a lifespan

Sepehrband and his team have developed new PVS mapping technology that they will apply to more than 13,000 high-resolution magnetic resonance imaging (MRI) brain scans to build maps of PVS at various stages across the lifespan. The researchers also will study whether health factors such as body mass index, blood pressure, sleep quality and tobacco use are linked to changes in PVS.

This data and the computational tools will then be shared with the broader scientific community, enabling a vast range of applications, including the potential development of diagnostic tools and treatments for neurological and neurodegenerative disorders. This data also will advance our understanding of the link between brain clearance system and overall brain health.