Nausea, panic, tears – why wasn’t I warned about antidepressant comedown

A strange sensation, like electric currents passing through my brain, jolted me and brought on a strong feeling of unease. Nauseous, a sense of impending doom began to creep.

I felt angry and on edge. Little grievances all of a sudden seemed overwhelming. I began ruminating over the past, and the future seemed bleak. I was 22 weeks pregnant and, while I’d been feeling excited about having a baby, I now felt scared and unable to cope.

Later, I sobbed in bed unable to sleep. What was wrong with me? 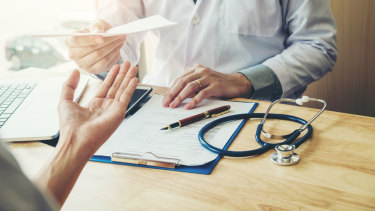 Why are patients not warned about antidepressant withdrawal?Credit:Shutterstock

About a week before, I stopped my antidepressants under the guidance of a psychiatrist.

He had given me no warning that I might experience these symptoms, nor had the doctor who first prescribed the pills for my anxiety and depression about a year earlier.

It’s hard to get information about antidepressant withdrawal from official sources, but Harvard Medical School’s website explains symptoms come on quickly, unlike the usual slow return of a mental illness relapse.

One in 10 Australians take antidepressants, second only in the world to Iceland.

Information is so scarce that my psychiatrist told me he wasn’t taught about withdrawal at university as there wasn’t any evidence on it.

I spoke to Professor Derelie Mangin from McMaster University in Canada, who has led the first rigorous, long-term trial of withdrawal, as to why this may be.

“Drug companies really only have a mandate to their shareholders to do the trials that will bring the drugs onto the market,” she explained.

“The system is not structured for anyone to have responsibility. Given the lengths of time that these drugs have been on the market, it’s extraordinary that we still don’t have the kind of evidence that we need.”

I don’t want to debate the merits of antidepressants. For some people they are lifesavers, for others they don’t seem to work.

What I’m advocating for is adequate information so withdrawal can be better managed and people can make informed decisions.

One in 10 Australians take antidepressants, second only in the world to Iceland. The rate has almost doubled from 2000 to 2016. At the moment, many are resorting to groups on the internet for advice. But these pills are big business, and users deserve correct information.

For example, I didn’t know – and neither it seems did my doctors – to reduce symptoms, it's better to taper off over months, not weeks.

A doctor I saw during my withdrawal said it was rare, but a little survey of my friends has made me doubt this. Almost a dozen told me they’d experienced similar withdrawals, while others knew friends or clients who had.

“Plus, a brain fog so bad I could hardly focus on anything and would forget my words mid-sentence,” she said.

Another friend, a health worker in her early 40s, also had brain zaps – the sensation of electric currents – plus vomiting.

“I wasn't warned,” she said. “Actually I was told there were no side effects at all before I took them.”

A third, an academic in his mid-30s, said he experienced three months of brain zaps, along with insomnia and hyperactivity.

I didn’t know – and neither it seems did my doctors – that it was better to taper off over months, not weeks.

“The doctor definitely minimised it in my experience. It’s such a serious side effect, and yet I felt it was completely glossed over.”

Then there are even more serious cases.

A lawyer friend, aged in his 50s, said he’d given up trying to come off the pills he was first prescribed 25 years ago.

“[I] have tried on multiple occasions to taper but always get severe brain zaps and the other symptoms. Withdrawal makes working impossible,” he said.

“All psychs have told me I should be able to taper over a week or so. Rubbish.”

Alarmingly, two friends said they became suicidal. One, a fashion designer in her late 30s, was experiencing this at the time we spoke and couldn't get in to see her doctor.

“I have never in my life felt this out of control, nor suicidal,” she said. “The crying and the hysteria is scary.”

But we don’t need to rely on anecdotal evidence. Research has, in fact, begun to emerge.

A New Zealand survey of long-term users of psychiatric medications, three-quarters complained about withdrawal symptoms. In another of 250 long-term users, most commonly antidepressants, half rated their withdrawal as severe.

In a third, 130 of 180 users reported withdrawal symptoms and almost half felt they were addicted. Many of the participants complained of a lack of information and support on withdrawal.

The doctor I saw said she didn’t warn patients as she believed it was more important to treat a person’s mental illness than worry them about what could occur if they go off it.

Professor Mangin disagreed, saying patients were entitled to be informed and warning them took the fear out of the equation.

She described brain zaps as “alarming” and listed a litany of other possible symptoms including ones similar to the flu, gut problems, vivid nightmares, insomnia, distress and panic.

One patient told her she would have thought she was going mad if she wasn’t warned.

“She was quite a high-functioning woman, with a high-pressure job, and she said, ‘I would just burst into tears for no reason at all’,” Professor Mangin said.

“That’s why it’s so important to know so that you can plan for it from the outset and not feel alarmed by it. And I think you’ve got to be able to prepare your family for it too.”

Professor Mangin hopes her research – due to be published in the coming months – will help doctors set a course length, rather than parking patients on the drugs long-term unnecessarily, and plan for a gradual, monitored and supported withdrawal.

The only options my psychiatrist, who worked at a major Melbourne hospital, could give me to treat withdrawal was to restart the antidepressant (which hadn’t helped my condition in the first place and carried risks to my baby), take another antidepressant that others also report experiencing withdrawals from, or start an anti-psychotic.

None of these felt appealing, and, seeing I’d already passed through the worst of it by the time I was able to see him, I hung on.

I was lucky my withdrawal only lasted about three weeks, with a few lingering symptoms that gradually faded. Other people report them continuing for months or years.

A few months on, I’m feeling better than I was before I withdrew, so I’m happy I didn’t go back on the medication. But I deeply regret the withdrawal and what occured in my heightened emotional state. The vivid nightmares of awful things happening to my baby have stayed with me.

With such huge numbers of Australians on antidepressants, we deserve better.