New insight to the brain’s response to injury

In response to brain injury, neural stem cells cluster and migrate to the site of injury. The clustering is key—without it, the cells don’t travel. But what causes it? To investigate, Yale researchers created a 3-D model of the brain’s workings.

The results of the study, led by the lab of Anjelica Gonzalez, associate professor of biomedical engineering, show for the first time that an enzyme known as metalloproteinase-2 (MMP2), secreted from endothelial cells, triggers the cells’ injury response process. The findings, which could lead to advances in treating brain injury, are published in the FASEB Journal.

For this study, the researchers specifically looked at brain injury caused by stroke, although the implications of their findings apply to concussion, Parkinson’s disease, Alzheimer’s and other neurological disorders. In the case of brain injury, the neural stem cells cluster together and migrate beyond the part of the brain known as the subventricular zone, where they reside. The single direction of their path is guided in part by chemical signaling from endothelial cells lining the blood vessels and pericytes, which surround the endothelial cells. The researchers focused on what sets the process in motion.

“We were interested to know what causes the clustering effect,” said Rita Matta, lead author of the study and a former graduate student in Gonzalez’s lab. Collaborating with the lab of Michael Murrell, associate professor of biomedical engineering, they used a variety of models to get a better look at the mechanisms at play. 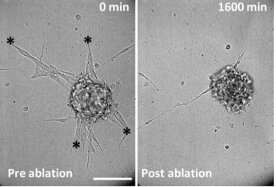 They saw that it was the endothelial cells that promoted not only migration, but also the clustering by secreting MMP2.

“We can think of MMP2 as an enzyme that degrades the matrix or the area surrounding the tissue,” Matta said. “These are all the proteins that neural stem cells would normally adhere to, but instead, it’s like a snowplow where MMP2s are creating this pathway for the clusters to migrate down.”

Specifically, they found that the secretion of the MMP2 leads to activation of a protein called N-cadherin that acts as an adhesive for cells. This leads to arm-like extensions on the neural stem cells that cause them stick together and cluster. The formatting of a leader arm is critical to the process because without it, the cells won’t migrate to the brain injury site. The researchers confirmed this by using a microfluidic system and using a laser to cut off the “arms” of leading cells (seen in image above), preventing the clusters from migrating—even in the presence of endothelial cells.

“By creating technology that mimics human brain tissue, we can learn how best to understand neurological processes, but also use these same tools to develop therapeutic strategies that repair damaged or disordered tissues,” Gonzalez said.