A world-leading medical journal has called into question the widely held theory that mosquitoes are responsible for transmitting the flesh-eating Buruli ulcer. 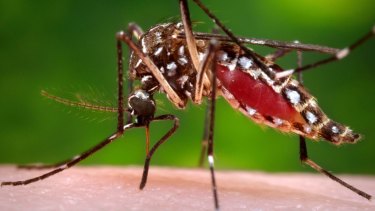 Local scientists believe mosquitoes are most likely responsible for transmitting the Buruli ulcer to humans. Credit:Reuters

The most affected areas include the Mornington and Bellarine peninsulas but in recent months an increasing number of cases have been diagnosed in bayside and inner Melbourne.

Buruli ulcers are non-healing sores that slowly get bigger, developing into deep, disfiguring ulcers  if left untreated. They are known to be caused by the tropical bacteria Mycobacterium ulcerans but the mechanism by which it passes to people is less clear.

Local scientists have theorised the disease is most likely spread through possums and other animals, being  transmitted from possums to humans via mosquito bite.

However, a report published this week in the May issue of The Lancet Infectious Diseases states that "studies in west Africa are less supportive of this theory".

It highlights a recent study, conducted in Benin, which concluded mosquitoes were not responsible for the transmission of the disease in the west African nation.

In this study, mosquitoes were collected over a period of a year, in an area of Benin where Buruli ulcers are rife and not one single mosquito was found to carry the DNA of the M. ulcerans bacteria.

It concluded that mosquitoes "don't play a pivotal role"  in the transmission of M. ulcerans in the studied area, which has one of the highest reported cases of Buruli ulcers in the world.

The World Health Organisation, which is monitoring the escalating epidemic in Victoria, maintains  that "the exact mode of transmission of M. ulcerans is still unknown".

The Lancet report comes as the Victorian government prepares to launch a new $3 million project – "Beating Buruli in Victoria" – which aims to stop the ulcer's spread through a two-year mosquito control study.

The project will see residents on the Mornington Peninsula – Victoria's Buruli ulcer hot spot – receive information on how to protect themselves from mosquito bites and the diseases mosquito bites might transmit – including Buruli ulcer.

Some areas will also receive an intensive mosquito control program, which will involve mosquito surveillance and mosquito culling.

At the end of the study, a comparison will be made between areas that received very active mosquito control versus areas that only received community information to see how the number of people who get Buruli ulcer in each area differs. 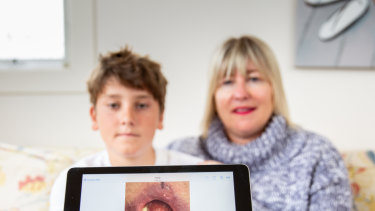 Gus Charles and his mother Sally. Gus was diagnosed with a Buruli ulcer in 2017. Credit:Mathew Lynn

Professor Paul Johnson, director of research at Austin Health, who is involved in the mosquito control study, says he believes the Benin study does not rule out the likelihood that mosquitoes are transmitting the disease here.

WHO figures show that apart from south-east Australia and far North Queensland, Buruli is mainly a disease of the tropical developing world, although it also occurs at low levels in Japan.

"Our evidence has shown that if you go to endemic areas in Victoria, up to four in every 1000 mosquitoes have been found to test positive for the bacterium [M. ulcerans] that causes Buruli ulcers in humans," Professor Johnson said.

"We have also shown in the laboratory that very low doses of M. ulcerans delivered beneath the skin of a mouse tail by a minor injury caused by a mosquito or a needle puncture is sufficient to cause Buruli ulcer".

"I believe there is not one single way that humans contract Buruli ulcer but in Victoria there is perhaps a common way and that is when mosquitoes stumble across the bacteria, most likely from possums … and then bite humans."

"It's fair to say the jury is still out, but this is still the best idea in town," he said.

"And if you were asking me to put my money down, I would say there are different modes of transmission of the disease and there appears to be something special and unusual going on in Victoria, separate to what is happening in Africa, and we need to look at our own situation and decide how best to prevent Buruli locally."