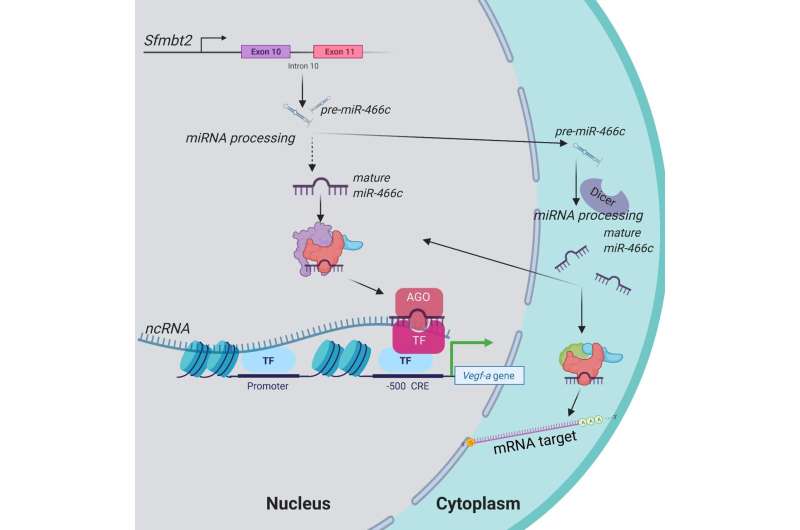 A novel angiogenic microRNA drug can be a new option for the treatment of ischemic cardiovascular disease, according to a new study published in PLOS One by researchers from the University of Eastern Finland together with international collaborators. In the study, the researchers describe a novel nuclear acting microRNA.

MicroRNAs are small RNA molecules, which regulate gene expression. Their canonical role is gene silencing by targeting messenger RNAs in cell cytoplasm. However, this novel microRNA, miR-466c, has a different mechanism of action. It upregulates the vascular endothelial growth factor A (VEGFA) by targeting the gene promoter in the cell nucleus.

In addition to expanding the academic understanding of microRNA biology, these findings have commercial relevance for the development of novel RNA drugs. Increasing the expression of VEGFA by using small RNAs offers novel options for the treatment of ischemic cardiovascular disease, where the blood supply in the tissue is compromised.

“RNA activation as a phenomenon has been known for 16 years already, but its commercial potential has been recognized only recently,” says Adjunct Professor Mikko Turunen, Chair of the newly founded RNatives company, which will be commercializing the patented microRNA drug.

“Our patented microRNA drug has several advantages over traditional means of increasing gene expression. First of all, by activating the cell’s own therapeutic gene (e.g., VEGFA), all the different spliceforms of the gene are correctly produced. Also, being a small RNA, it is much less immunogenic and more stable than longer RNAs, such as mRNA based drugs,” Turunen says.