Number of people drinking to unsafe levels is falling

The proportion of people drinking at dangerous levels has fallen, according to NHS figures.

The fall is a victory for campaigners and Government initiatives, which have tried to encourage the average drinker to cut back.

However, the NHS Digital data also shows hospital admissions caused by alcohol have risen by 15 per cent in a decade.

In total, almost 1.2 million hospital admissions may have been linked to alcohol last year – a three per cent jump in one year.

The figures give an indication of the burden placed on the NHS, as experts have been prompted to urge for ‘large scale’ action immediately.

The proportion of people drinking to dangerous levels has fallen between 2011 and 2017, according to NHS Digital figures. Men drinking at an increased or higher risk of harm decreased by six per cent, and by four per cent in women 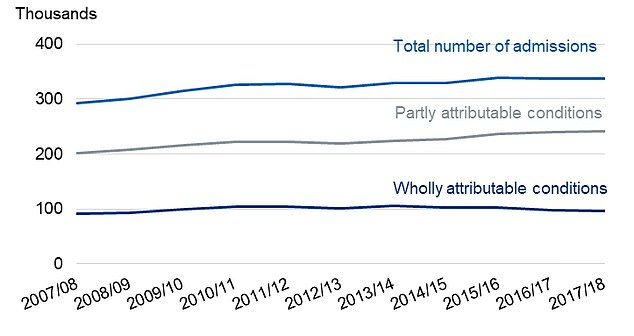 UK alcohol consumption has decreased between 2000 and 2016, with 21 per cent of people drinking at least 14 units each week, on average.

Men drinking at an increased or higher risk of harm decreased by around six per cent between 2011 and 2017, and by four per cent in women.

And the proportion of women drinking more than six units each day dropped from 16 per cent to 11 per cent between the same time frame.

A spokesperson for The Alcohol Information Partnership, an industry body which promotes balanced debate, said: ‘Today’s statistics confirm that 79 per cent of people in England are drinking responsibly and this reflects the UK’s changing relationship with alcohol.

‘To encourage this pattern of sensible drinking across the board, we need to see more targeted measures which address the small minority of drinkers who drink to harmful levels and need to change their habits.’

Although there are positive signs alcohol consumption is falling, alarming figures showed hospital admissions are increasing.

There were 1.2million estimated admissions where the primary reason for hospital admission or a secondary diagnosis was linked to alcohol.

Admission rates in England due to conditions which could have been caused by alcohol have increased every year since 2008.

Eytan Alexander, chief executive of addiction treatment specialists UK Addiction Treatment, said: ‘Alcohol in England is without a doubt at crisis point and worse still, we start another year with no dedicated strategy from Government for tackling alcoholism in this country.

‘The numbers speak for themselves, and it’s time to admit that change is needed in order to help the NHS and to help those most vulnerable in society.’ 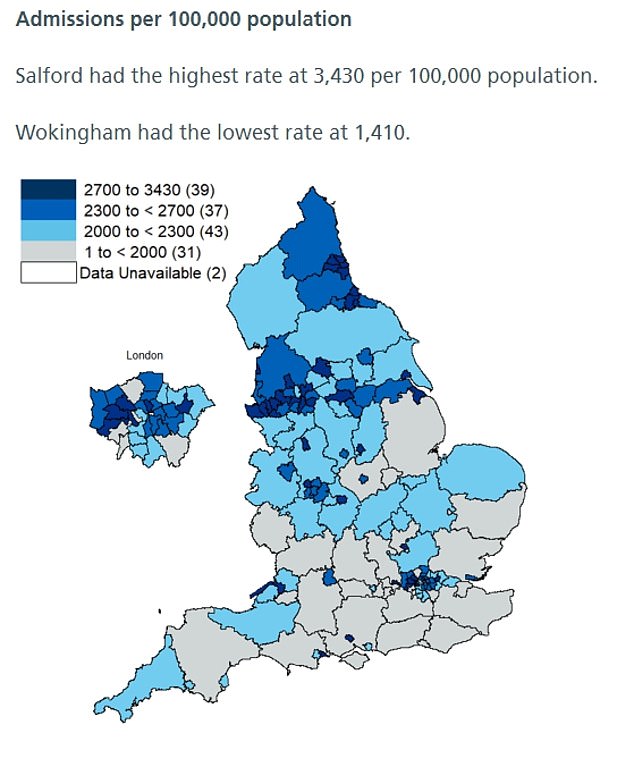 Salford, Manchester, was the local authority with the highest rate of hospital-admissions relating to alcohol in 2017/18, at 3,430 per 100,000, compared to Wokingham, Surrey, with the lowest rate at 1,410

Drinkers should have at least two alcohol-free days a week, health chiefs said in December.

One in five people drink above the recommended limit of 14 units a week, equivalent to a small 150ml glass of wine every day, a survey found.

Duncan Selbie, chief executive of Public Health England, said: ‘Many of us enjoy a drink, but it’s all too easy to let our drinking creep up on us.

‘While the link with liver disease is well known, many people are not aware that alcohol can cause numerous other serious health problems, such as high blood pressure, heart disease, as well as several cancers.

‘Setting yourself a target of having more drink-free days every week is an easy way to drink less and reduce the risks to your health.’

People in the North East had higher admissions than in the South East.

Ian Hamilton, a lecturer in mental health and addiction at the University of York, told MailOnline: ‘There is a clear North/South divide as the data shows it is those from the most deprived northern areas that are likely to die even though those with higher incomes are more likely to binge drink.

‘Alcohol is cheaper than its ever been and we are spending more on it than before.

‘This is no accident as the alcohol industry has worked hard to ensure that alcohol taxes are kept to a minimum to make sure drink remains affordable.’

The British Medical Association have said they will continue to urge the Government to commit to creating effective measures such as a minimum unit pricing for alcohol, mandatory labelling and limits on alcohol advertising.

The BMA, with the support of some brewers and health professionals, believe the minimum price should be no less than 50p per unit.

The advantage of minimum pricing is that its impact is focused on heavy drinkers and young people.

Professor Dame Parveen Kumar1, BMA board of science chair, said: ‘The latest statistics are alarming and show that rather than making progress, the public are at even greater risk of alcohol-related ill health than in previous years.

‘It is clear that large-scale action is required immediately.’

The Government NHS 10-year plan is set to make more interventions to help persuade heavy drinkers who end up in hospital.

Alcohol care teams are planned to be set up in the 50 hospitals that have the largest number of hospital admissions, with the hope of reducing readmissions and costs – currently costing £3.7billion a year.