Playground study shows how recess can include all children 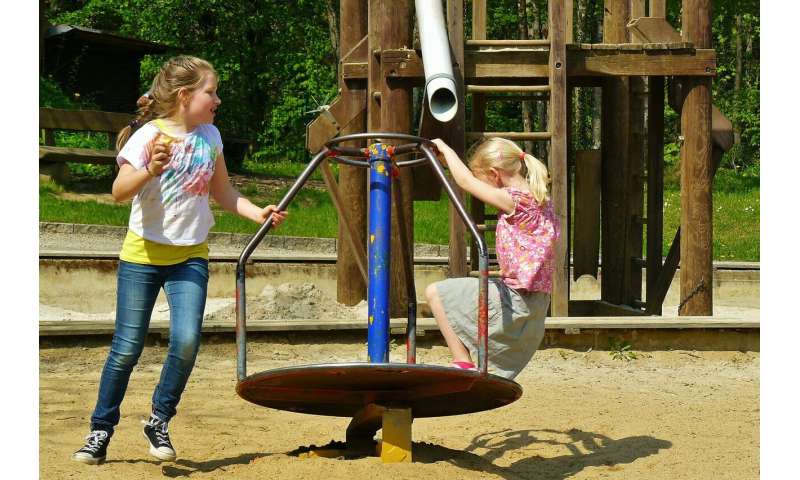 For children with autism, the playground can be an isolating experience. The spontaneous soccer games, roving packs of friends and virtual buffet of activities can be chaotic, frustrating and confusing. Recess is not a time to join, but to retreat.

A University of Washington-led research team found that children with autism communicate with peers and participate in activities more often than people might presume. Jill Locke, a research assistant professor in the UW Department of Speech and Hearing Sciences, saw the potential in studying how children with autism experience recess, and how that could lead to opportunities for development and inclusion.

Schools, legitimately, focus on supporting students in the classroom, Locke said, and many children with autism spend most, if not all, their day in a general education setting. However, recess tends to be viewed only as a necessary break for students and teachers.

“For children with autism, recess may be the hardest period of the day, where kids struggle the most. There’s a lot of stimuli and disorganization on the playground,” said Locke, who specializes in interventions for children and adults with autism. “The literature estimates that students with autism spend about one-third of their recess period alone, and that limits the opportunities to practice social skills, engage with their peers and develop friendships, which is what typically developing children do at recess.”

Locke and her team visited elementary schools at recess. They observed 55 elementary-age students with autism, recording not just their activities but also how they behaved during those activities—their emotions, communication with classmates, the positives and negatives. Their study published last fall in the journal Autism.

The qualitative approach is what distinguished this study from other past research, Locke said. Studies have catalogued the recess activities of children with autism, but not their nuanced behaviors as they played, or how they relate to typically developing children on the playground.

The team found that recess periods varied from 10-35 minutes. During an average recess period, children with autism played alone for about a quarter of the recess time, but also spent 30 percent of the time with peers. The remainder was spent in proximity to other children, but not interacting with them. Nearly half of the participants spent time talking to other children. Forty percent of children played with toys or natural items such as sticks and rocks; almost one-third played on the swings, the monkey bars, slides and other equipment; and about one-fourth joined in playground games like tag.

While not every conversation attempt was successful—a child with autism might not pick up on certain nonverbal cues, for example, or try to talk to someone from across the playground—the efforts show intent and motivation, Locke said.

And therein lie the opportunities to make recess more inclusive, she added.

The playground can be an environment that supports various interests and activities designed to improve motor, play and social skills, Locke said. Monkey bars and swings and toys lend themselves to partner activities, the playground to a scavenger hunt and the lunch table to conversation games. That also likely necessitates more guidance from adult recess monitors or teachers, Locke notes, but inclusion and empathy also can be cultivated as part of a classroom or school culture.

“The strategies we use with children with autism also work for most children,” she said. “We use visual strategies and direct language to reduce ambiguity and make things clearer for everyone. We want to make recess a welcoming, inclusive and safe space for all kids.”