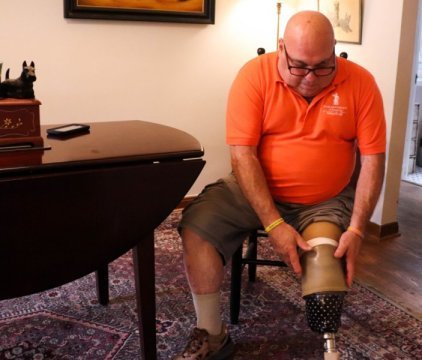 Doctors at The Ohio State University Wexner Medical Center and College of Medicine are pioneering the use of primary targeted muscle reinnervation (TMR) to prevent or reduce debilitating phantom limb and stump pain in amputees.

Losing a limb due to trauma, cancer, or poor circulation can result in phantom limb and stump pain in upwards of 75 percent of amputees in the United States. Primary TMR – the rerouting of nerves cut during amputation into surrounding muscle – greatly reduces phantom limb and residual limb pain, as reported in recent publications by Dr. Ian Valerio, division chief of Burn, Wound and Trauma in Ohio State’s Department of Plastic and Reconstructive Surgery, and Dr. J. Byers Bowen, a former resident who is now in private practice. Their latest work featured in the January 2019 issue of Plastic and Reconstructive Surgery describes how to perform this technique in below-the-knee amputations.

In this paper, Valerio and Bowen provide a detailed description of TMR in below-the-knee amputees and document the benefits of primary TMR for preventing pain.

Over the course of three years, the surgeons performed 22 TMR surgeries on below-the-knee amputees, 18 primary and four secondary. None of the patients have developed symptomatic neuromas and only 13 percent of patients who received primary TMR reported having pain six months later.

“A significant amount of pain in amputees is caused by disorganized nerve endings, i.e. symptomatic neuromas, in the residual limb. They form when nerves are severed and not addressed, thus they have nowhere to go,” Valerio said. “Attaching those cut nerve endings to motor nerves in a nearby muscle allows the body to re-establish its neural circuitry. This alleviates phantom and residual limb pain by giving those severed nerves somewhere to go and something to do.”

“TMR has been shown to reduce pain scores and multiple types of pain via a variety of validated pain surveys. These findings are the first to show that surgery can greatly reduce phantom and other types of limb pain directly,” Valerio said.

Bowen added that upper extremity amputees are better able to use and control their prosthetics in addition to their improved pain outcomes. He said, “TMR allows for more individual muscle unit firings through the patient’s thoughts. It provides for better intuitive control resulting in more refined functional movements and more degrees of motion by an advanced prosthetic.”

The researchers believe primary TMR is a reliable technique to prevent the development of disorganized nerve endings and to reduce phantom and other limb pain in all types of amputations. When done at the time of initial amputation, there is minimal health risk and recovery is similar to that of traditional amputation surgery.

Surgeons perform TMR routinely at Ohio State, with primary TMR as the standard of care for most orthopedic-based traumatic and oncologic amputations. Valerio lectures and trains surgeons around the world on the primary TMR technique in an effort to make it a global best practice.