Smoking 'is even MORE damaging to the heart than previously thought'

Smoking is even MORE damaging to the heart than previously thought, experts warn

Smoking causes even more damage to the heart than thought, researchers warned today.

For decades, experts have known that lighting up can cause blocked arteries, which can over time trigger heart disease and strokes.

A study of nearly 4,000 people has now shown that cigarettes can also make hearts thicker and weaker.

As a result, they struggle to pump blood around the body.

And the more a person smokes, the worse their heart function becomes.

However, experts found that the heart can bounce back to a certain extent — so it is never too late to quit, Danish cardiologists said. 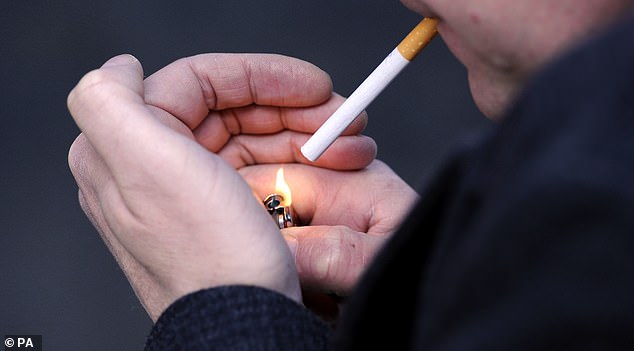 Experts have warned for decades that lighting up causes blocked arteries, which can lead to heart disease and stroke. Now, a study of nearly 4,000 people in Denmark shows that cigarettes also lead to thicker and weaker hearts that struggle to pump blood around the body 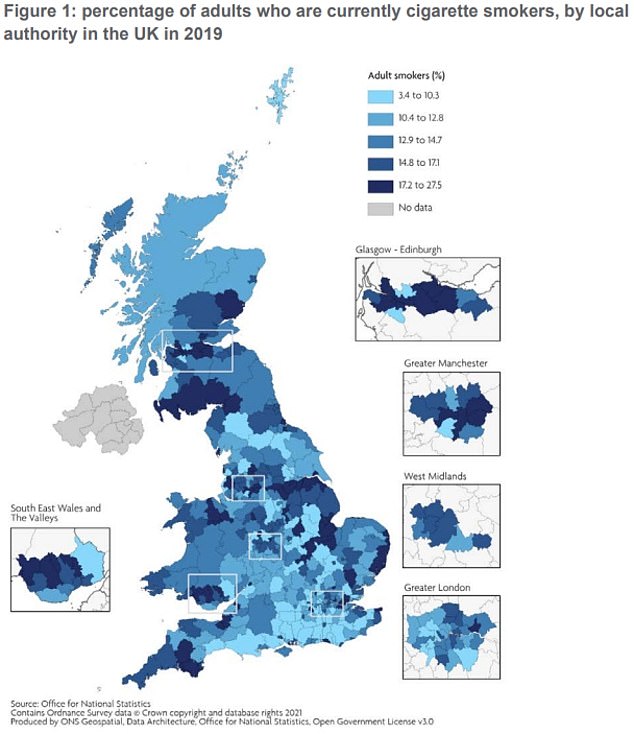 Around 6million people smoke in the UK and it is behind 78,000 deaths every year. The NHS spends £2.4billion every year treating smoking-related conditions. The map shows adult smoking rate in Britain through colours representing increasing ranges of prevalence, from the 3.4 per cent to 10.3 per cent range, up to the 17.2 to 27.5 per cent range. The highest smoking uptake is found in parts of the North West, East Midlands, South Yorkshire, East of England and South West 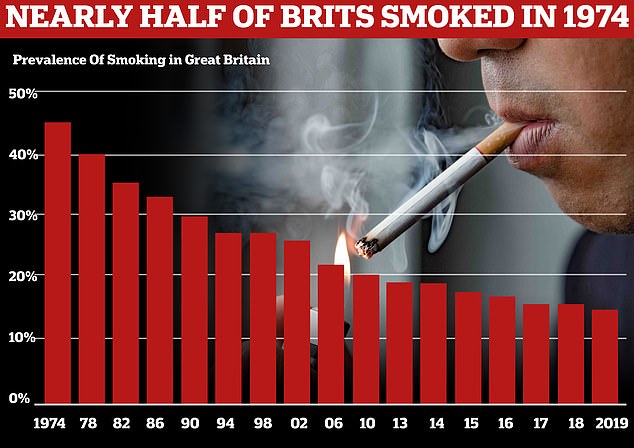 Smoking has steadily decreased since 1974, with around 15 per cent of the population smoking in 2019. That year, the Government set a target of becoming smoke-free by 2030

How does tobacco damage the heart?

Tobacco smoke contains more than 7,000 chemicals, including tar and others that can narrow arteries and damage blood vessels.

While nicotine – a highly addictive toxin found in tobacco – is heavily linked with dangerous increases in heart rate and blood pressure.

Smoking also unleashes poisonous gases such as carbon monoxide, which replaces oxygen in the blood – reducing the availability of oxygen for the heart.

How many people does smoking kill?

Smoking is known to kill more than seven million people across the world each year, including 890,000 from breathing in second-hand smoke.

But many people are unaware that nearly half of those deaths, around three million, are due to heart disease, including heart attacks and strokes.

Dr Eva Holt, of Herlev and Gentofte Hospital in Copenhagen and lead study author, said: ‘Our study indicates that smoking not only damages the blood vessels but also directly harms the heart.

‘The good news is that some of the damage is reversible by giving up.’

Dozens of studies have shown smoking is linked with heart failure — when the heart muscle does not pump blood around the body as well as it should, usually because it is too weak or stiff.

As a result, the body does not get the oxygen and vital nutrients it requires to work normally.

However, the link between smoking and the structure of the heart has not been fully examined.

The researchers used data from an earlier study, which examined the heart health of 3,874 people aged 20 to 99 who did not have heart disease.

Volunteers completed questionnaires on their smoking history and had a heart scan, which provided information on its structure and how well it works.

Dr Holt and colleagues then compared heart scans of current smokers against those who had never smoked.

Nearly a fifth of participants were current smokers (18.6 per cent), while 40.9 per cent used to smoke and 40.5 per cent never smoked.

The results, which will be presented at European Society of Cardiology Congress in Barcelona on Friday, show current smokers had thicker, weaker and heavier hearts than those who never smoked.

And their left ventricle, the most important part of the heart, had a smaller volume of blood and less power to pump the blood out to the rest of the body.

The team also spotted that the changes in the heart worsened in relation to how much a person smoked.

And over a 10-year period, the hearts of those who kept smoking became thicker, heavier and weaker, compared to those who quit.

Dr Holt said: ‘The more you smoke, the worse your heart function becomes.

‘The heart can recuperate to some degree with smoking cessation, so it is never too late to quit.’

The 7,000 chemicals in tobacco — including tar and others that can narrow arteries and damage blood vessels — are thought to be behind some of the damage smoking inflicts on the heart.

Smoking also unleashes poisonous gases such as carbon monoxide, which replaces oxygen in the blood — reducing the availability of oxygen for the heart.

Around one in eight Brits and Americans report smoking cigarettes now, compared to nearly half in the 1970s.

England’s Government aims to slash smoking rates to just five per cent by 2030, with a review this summer calling for the legal age to be raised to 21.

Smoking kills around 78,000 people in the UK every year, with many more living with illnesses due to their habit, half of which are due to cardiovascular diseases, such as heart attack and stroke.