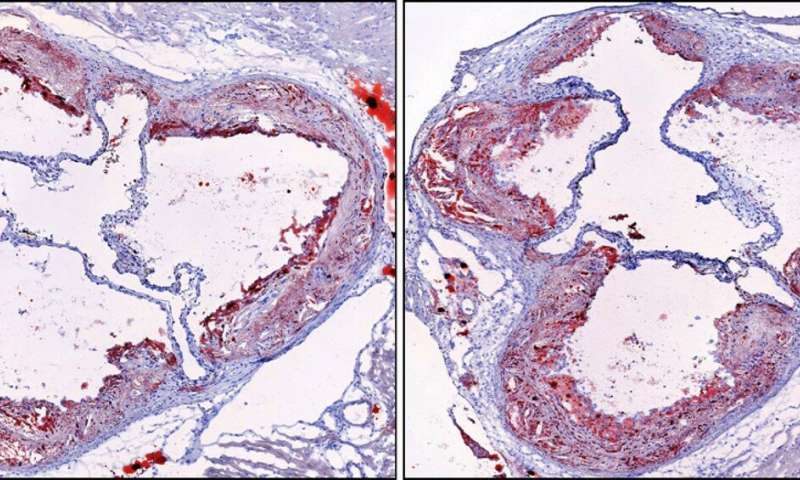 Researchers say they are closer to solving the mystery of how a good night’s sleep protects against heart disease. In studies using mice, they discovered a previously unknown mechanism between the brain, bone marrow, and blood vessels that appears to protect against the development of atherosclerosis, or hardening of the arteries—but only when sleep is healthy and sound. The study, funded by the National Heart, Lung, and Blood Institute (NHLBI), part of the National Institutes of Health, will appear in the journal Nature.

The discovery of this pathway underscores the importance of getting enough, quality sleep to maintain cardiovascular health and could provide new targets for fighting heart disease, the leading cause of death among women and men in the United States, the researchers said.

“We’ve identified a mechanism by which a brain hormone controls production of inflammatory cells in the bone marrow in a way that helps protect the blood vessels from damage,” explained Filip Swirski, Ph.D., the study’s lead author who also is an associate professor at Harvard Medical School and Massachusetts General Hospital, Boston. “This anti-inflammatory mechanism is regulated by sleep, and it breaks down when you frequently disrupt sleep or experience poor sleep quality. It’s a small piece of to a larger puzzle.”

Swirski noted that while other similar mechanisms may exist, the findings are nonetheless exciting. Recent research has linked sleep deficiency and certain sleep disorders, such as sleep apnea, to an increased risk of obesity, diabetes, cancer, as well as heart disease. But scientists have known little about the cellular and molecular underpinnings that could help explain the link between sleep and cardiovascular health.

Poor or insufficient sleep is a major public health problem affecting millions of people of all ages. Studies show that getting enough quality sleep at the right times is vital for health, but fewer than half of adults in the United States get the recommended seven to eight hours per day. 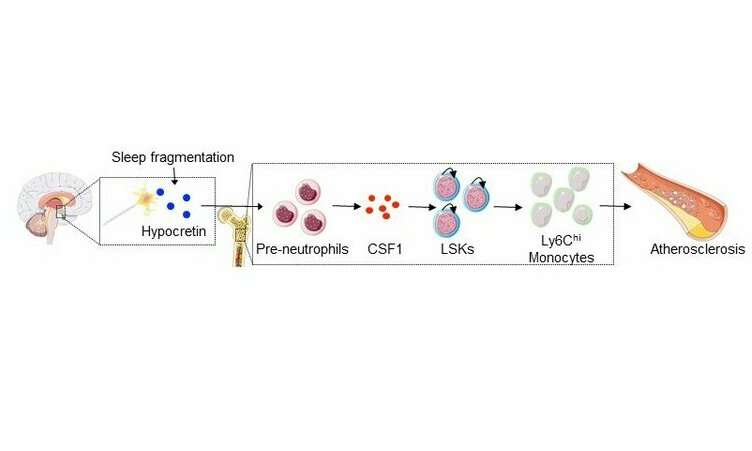 To learn more about the impact of this deficiency on cardiovascular disease, the researchers focused on a group of mice that were genetically engineered to develop atherosclerosis. They disrupted the sleep patterns of half the mice and allowed the other half to sleep normally.

Over time, the mice with disrupted sleep developed progressively larger arterial lesions compared to the other mice. Specifically, the sleep-disrupted mice developed arterial plaques, or fatty deposits, that were up to one-third larger than the mice with normal sleep patterns. The sleep-disrupted mice also produced twice the level of certain inflammatory cells in their circulatory system than the control mice—and also lower amounts of a hypocretin, a hormone made by the brain that is thought to play a key role in regulating sleep and wake states.

The researchers also showed that sleep-deficient, atherosclerotic mice that received hypocretin supplementation tended to produce fewer inflammatory cells and develop smaller atherosclerotic lesions when compared to mice that did not get the supplementation. These results, they said, demonstrate that hypocretin loss during disrupted sleep contributes to inflammation and atherosclerosis. But they cautioned that more studies are needed, particularly in humans, to validate these findings and especially before experimenting with hypocretin therapeutically.

Still, health experts say, targeting the newly discovered biological mechanism—a so-called neuro-immune axis—could be a breakthrough that one day leads to new treatments for heart disease, sleep, and other disorders.

“This appears to be the most direct demonstration yet of the molecular connections linking blood and cardiovascular risk factors to sleep health,” said Michael Twery, Ph.D., director of the National Center on Sleep Disorders Research at NHLBI. Circadian biology refers to the 24-hour internal body clock that governs the expression of many genes in most every tissue and the regulation of sleep and wake cycles.