Sweeteners and gut health: No calories does not mean no health effects 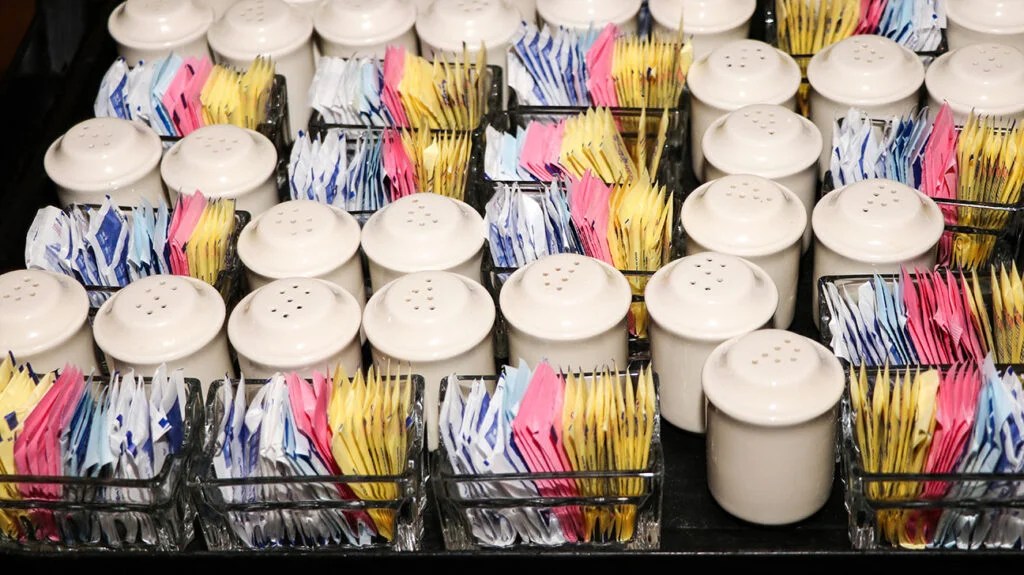 After eating foods that contain carbohydrates, blood glucose (blood sugar) levels rise as we digest the food. This post-meal spike in blood glucose levels is known as the glycemic response.

Non-nutritive sweeteners (NNSs), such as aspartame, saccharin, stevia, and sucralose, contain minimal or no carbohydrates and therefore were presumed by scientists not to trigger a glycemic response. This belief that NNSs are biologically inert, coupled with their sweetness, has made them very popular sugar substitutes, especially for the management of diabetes and weight gain.

In a study published In 2014, Dr. Eran Elinav, an immunologist and microbiome researcher at the Weizmann Institute of Science in Israel and the Microbiome & Cancer Division, DKFZ, Heidelberg, German, along with his team challenged the idea that NNSs are biologically inert. The study established that non-caloric artificial sweeteners induce glucose intolerance in mice by altering their gut microbiota.

Now, a new study published by Dr. Elinav and his team in the journal Cell shows that NNSs have a similar effect on humans.

“We need to raise awareness of the fact that non-nutritive sweeteners are not inert to the human body as we originally believed.”
— Dr. Eran Elinav

“This is a very strong and rigorous study and the results are important and timely,” Dr. Michael Goran, Professor of Pediatrics in the Keck School of Medicine at the University of Southern California and Program Director for Diabetes and Obesity at The Saban Research Institute at Children’s Hospital Los Angeles, who was not involved in this study, told Medical News Today. Dr. Goran is also the author of Sugarproof.

“Non-nutritive sweeteners are rapidly proliferating across the food supply and across all demographics including children and pregnant women, yet their full and long-term impact on human health has not been extensively studied,” he said.

The researchers recruited into the study only healthy volunteers who did not consume any NNSs in their daily diet. A total of 120 individuals passed the stringent screening test and the researchers randomly assigned them to one of six supplementation groups: aspartame, saccharin, stevia, sucralose, glucose (to control for potential interference from glucose in standard NNS formulations), and no supplement (the second control group).

All the sweeteners were given as commercially available sachets, containing a mixture of glucose and in doses lower than the FDA-recommended acceptable daily intake.

The researchers found that the groups consuming saccharin and sucralose had a “significantly elevated” glycemic response during exposure to the NNS. No significant effect on glucose tolerance was observed in the aspartame, stevia, glucose, and the no-supplement groups.

These findings suggest that the short-term consumption of saccharin and sucralose in doses lower than the acceptable daily intake can impact glycemic responses in healthy individuals.

Sweeteners can alter the gut microbiome

They found that all four tested NNSs altered the bacteria in the gut and the molecules they secrete. Similarly, the four NNSs “distinctly impacted” the oral microbiome.

Such microbiome changes did not occur in the control groups. These findings suggest that NNSs are not inert to the human microbiome.

“[The study is] a first step in confirming what many have suspected for a while now; that artificial sweeteners have a measurable impact on metabolism and health. The findings propose a valid mechanism of action for the downstream effects on glycemic control of sweeteners, through interaction with the gut microbiome.”
— Prof. Tim Spector, co-founder of personalized nutrition company ZOE and researcher at King’s College London

To determine whether microbiome changes were indeed the cause of altered glycemic responses, the researchers transplanted gut bacteria from the study participants into germ-free mice—mice that had been raised in completely sterile conditions and had no microbiome of their own.

Collectively, these mice showed glycemic responses which mirrored those of their human microbiome donors.

These results suggest that human microbiome responses to NNSs are highly personalized and may lead to glycemic alterations in some, but not all consumers, depending on their microbiomes and NNSs they consume.

The idea that the human gut microbiome may respond to certain food additives and trigger metabolic changes is not a new one. Previous studies have suggested that dietary emulsifiers, food preservatives, and colorants promote metabolic changes through microbiome alteration.

Research on other sweeteners

When asked about the study’s limitations, Dr. Elinav noted that the clinical trial only included healthy, non-overweight, normoglycemic individuals, and participants were administered only one NNS formulation.

“Our results call for further randomized, non-industry-sponsored interventional studies in at-risk populations, such as pre-diabetics and diabetics. Other NNS[s], formulations, and doses should be further explored,” said Dr. Elinav.

“Additionally, NNS impacts should be compared in future controlled trials between consumers of carbohydrate-rich and [carbohydrate]-restrictive diets for their potential differential effects on human metabolic physiology. A longer exposure period than the one utilized in our study may be required to fully assess the potential health ramifications mediated by the altered microbiome upon consumption of different NNS[s],” he added.

Dr. Goran, who was not involved in the study, suggested that other sweeteners, including monk fruit sweetener and allulose, are becoming increasingly popular and should also be examined.

“We also need studies on children because their microbiome is still developing and so the impact of these compounds might be different and affect longer-term outcomes,” he said.

“Also, this paper has very detailed information on microbiome outcomes and glycemic responses but other outcomes of interest include overall effects on appetite regulation as well as cognitive effects as there is evidence to suggest adverse effects on both these outcomes,” he added.

Prof. Spector, who was also not involved in the study, pointed out that the additives or colorants in such sweeteners may also be behind these effects.

“As the authors have stated in this paper, it’s likely that emulsifiers, additives and artificial colours are likely to affect the human microbiome and thus metabolic response but it’s not yet clear whether it is glycemic response or something else,” he told MNT.

Bottomline: Yay or nay for sweeteners?

Dr. Goran suggests avoiding all sweeteners “until we have stronger evidence that they are safe.”

“None of [the non-nutritive sweeteners] will resolve [the] craving for sweet taste and there are studies to suggest that habitual consumption of sweeteners increases overall daily calorie and sugar consumption.”
— Dr. Michael Goran

“The study results imply that the response is variable between individuals, but that all of the sweeteners seem to have some sort of impact so, none of them seem better than others and I would personally avoid them.”

While the results of this study raise concerns about the effects of NNSs on human health, Dr. Elinav cautioned that “sugar consumption still constitutes a very bad and well-proven health risk for obesity, diabetes, and their health implications, and our findings do not support or promote the consumption of sugar in any form or shape.”

“[We] strongly believe that sugar consumption should be minimized and avoided as much as possible,” he added.