Taste is a barrier to potential cure for food allergies

Scientists have discovered a potential cure for food allergies, but still have one remaining hurdle to clear – the compound at the center of the treatment smells and tastes disgusting.

Researchers from the University of Chicago are searching for an answer. A team found that ‘polymeric micelles’ were able to cure mice of peanut allergies – and believe it will be effective against all food-based allergies and inflammation.

Delivering the drug into a person’s gut is a problem, though. Researchers describe the metabolites that would need to be a the center of a potential oral drug as smelling and tasting like dog poop or rancid butter – not quite an appealing prospect.

The Chicago team have designed a delivery system using a chemical called butanoyloxyethyl methacrylamide that they believe can cloak the poor smell and taste of the drug, and made it palatable for consumption.

While the initial tests were focused on nut allergies, researchers are hopeful that this can be used as a base to cure all kinds of human allergies, and some inflammatory diseases. 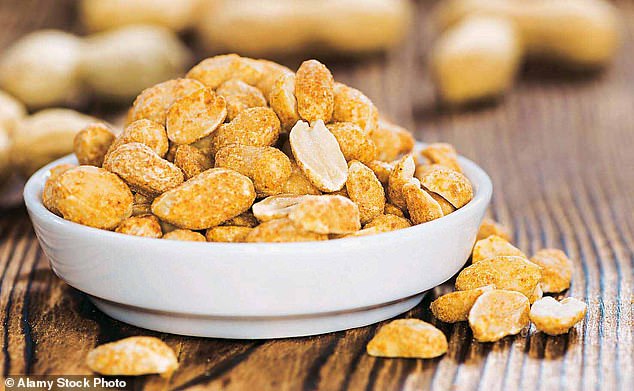 Researchers have discovered a bacteria that can help cure peanut allergies – and potentially other types as well. It is not palatable to many, though, presenting another challenge (file photo)

Researchers, who will present their findings this week at American Chemical Society Fall 2022 meeting, found that the polymeric micelles they built to combat allergies and inflammation can fight peanut allergies when tested on mice.

They identified butyrate as a key bacteria in the stomach’s microbiome that helps maintain the lining of the gut.

Daily dose of peanut powder may help up to THREE QUARTERS of children overcome their allergy, study claims

Researchers tested the effects of slowly increasing peanut intake on just under 100 children afflicted by the allergy. They were given 0.1mg of peanut protein powder to begin with — the equivalent of 0.03 per cent of an individual nut

Seventy-one per cent avoided suffering a reaction when given the equivalent of 16 peanuts two-and-a-half years later. By contrast, just two per cent dodged a flare-up in the placebo group

However, the scientists — led by a team at the University of Arkansas — say success rates of immunotherapy were highest among babies, suggesting there is a ‘window of opportunity’ in treating children early on

A person who lacks butyrate in their stomach will allow for partially digested food out of the gut, causing the body’s immune system to react.

This immune reaction causes the symptoms a person will experience as a result of an allergic reaction.

Butyrate plays a key role in making sure the body builds tolerance to foods as well. People with a lack of it in their microbiome will not be able to properly digest certain foods.

‘So we thought, why don’t we just deliver the metabolites — like butyrate — that a healthy microbiome produces?’ Dr Jeffrey Huddell, one of the principal investigators of the study, said to NeuroscienceNews.

The bacteria can be delivered either orally or via fecal transplant. Developing a pill that can provide it to the body is the most viable form of at-home treatment.

Scientists are running into one major issue, though: ‘butyrate has a very bad smell, like dog poop and rancid butter, and it also tastes bad, so people wouldn’t want to swallow it,’ Dr Shijie Cao said.

This lead to the research team working to develop a palatable delivery system. They combined the chemicals butanoyloxyethyl methacrylamide and methacrylic acid.

This polymer, as its called, ‘tucked’ the butyrate chains that cause the poor taste and smell and potentially make them palatable.

They tested their concoction on mice once again. The drug was still able to help the mice with their allergies, while the polymers surrounding the bacteria were excreted.

Around 32 million Americans suffer from a food allergy of some kind, according to the Asthma and Allergy Foundation of America.

The discovery by Chicago researchers will need to enter years of further trials before it can be used on humans – but there is a chance that their findings could be the base of future drugs to treat allergies.