Teenager was diagnosed with brain cancer when an optician noticed it

A teenager who visited her GP 15 times complaining of ‘crippling headaches’ was eventually diagnosed with a brain tumour.

Beckie Hiley, 19, of Chelmsford, Essex, was told by medics for more than a year that she had migraines and recommended ‘headache drugs’.

The English Literature student managed to make it through Freshers’ Week despite her severe vomiting, double vision and extreme fatigue.

But halfway through her first lecture, Miss Hiley ‘couldn’t go on’ and was rushed to A&E.

After being told yet again it was just a headache, it was an optician at Specsavers who finally noticed something was wrong and referred her to a specialist.

After enduring two surgeries to remove the mass, Miss Hiley is now undergoing radiotherapy – and will need chemo – to ensure she is all-clear. 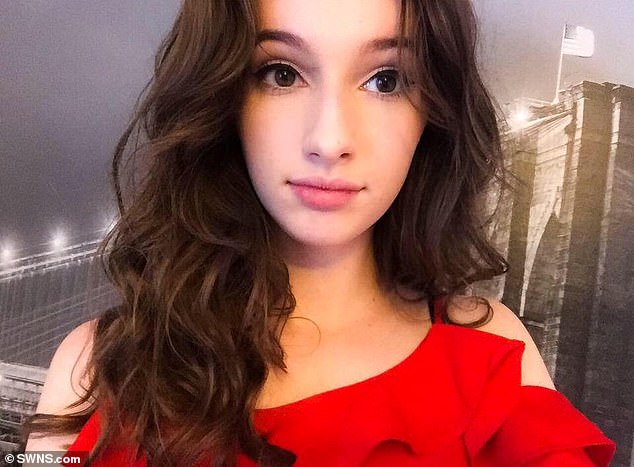 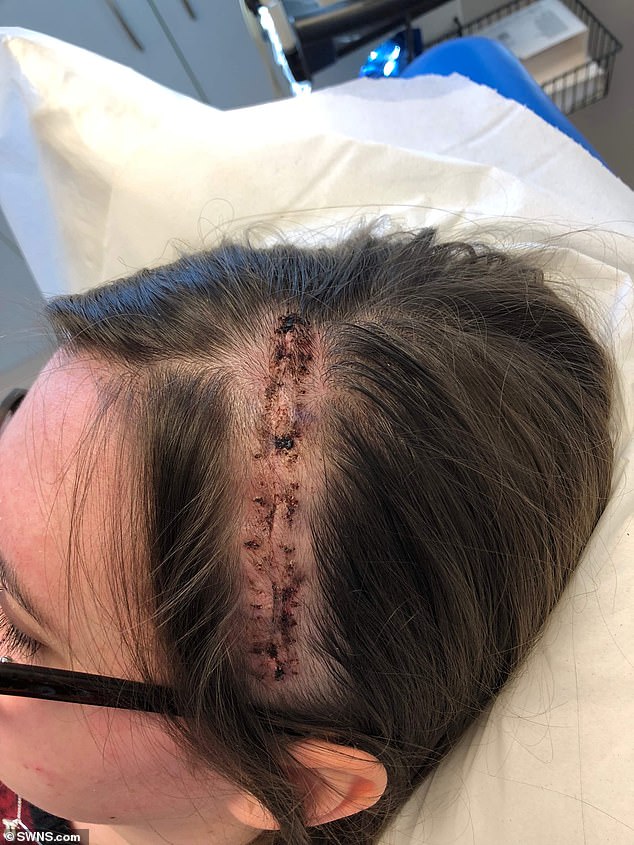 Miss Hiley went under the knife (scar pictured) to remove a section of bone from her skull so the tumour beneath could be treated. A scan revealed the mass had returned following the first procedure. Although the second was a success, she still needs radiotherapy and chemo 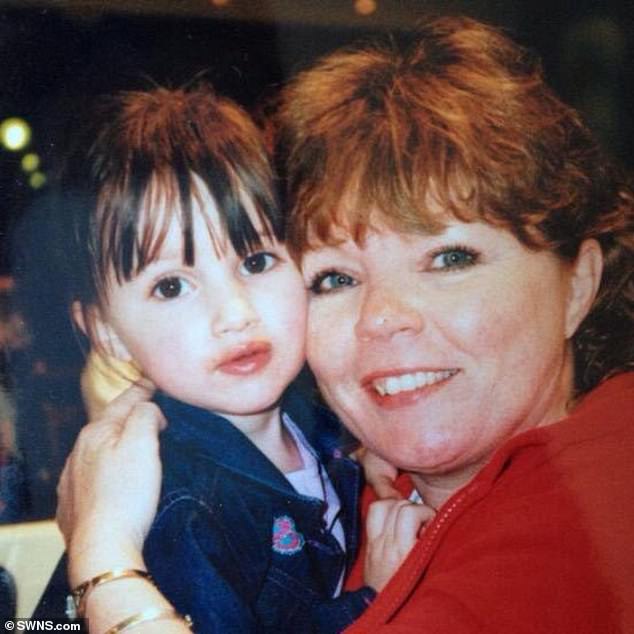 After being sent away from A&E when doctors once again insisted it was just a headache, Miss Hiley’s mother Emma (pictured together when Miss Hiley was younger) took her daughter to see an optician at Specsavers. The optician noticed her optics nerves were severely swollen

Speaking of her diagnosis, Miss Hiley said: ‘It has been a really tough journey. Going through a year of suffering and nobody listening is the worst bit.

‘The doctors were putting them down to migraines. But little did I know I was sitting in their office with a brain tumour.

‘It is crazy when you are trying to tell a doctor you are having the worst headache of your life and they just send you round the corner with headache drugs.’

Miss Hiley first developed headaches in November 2017 but the pain did not become crippling until March last year.

The discomfort then became increasingly intense and even left her vomiting.

‘I couldn’t keep any food down and I could barely walk from my bed to the sofa,’ Miss Hiley said. ‘I had no energy whatsoever.

‘I was going through Freshers’ week, meeting my lecturers and I started getting double vision, which is difficult when you’re studying literature.

‘I made it to one lecture and in that, I had to leave half way through to go to A&E. I just couldn’t go on.’ 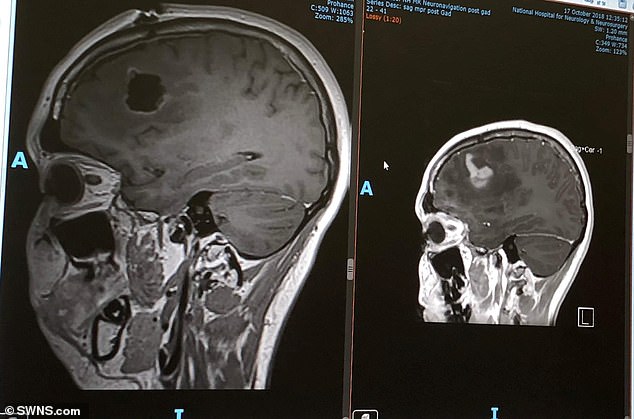 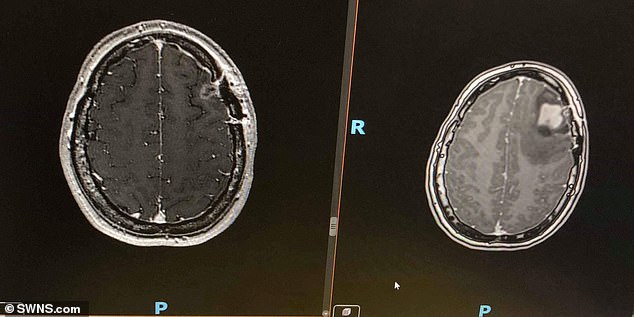 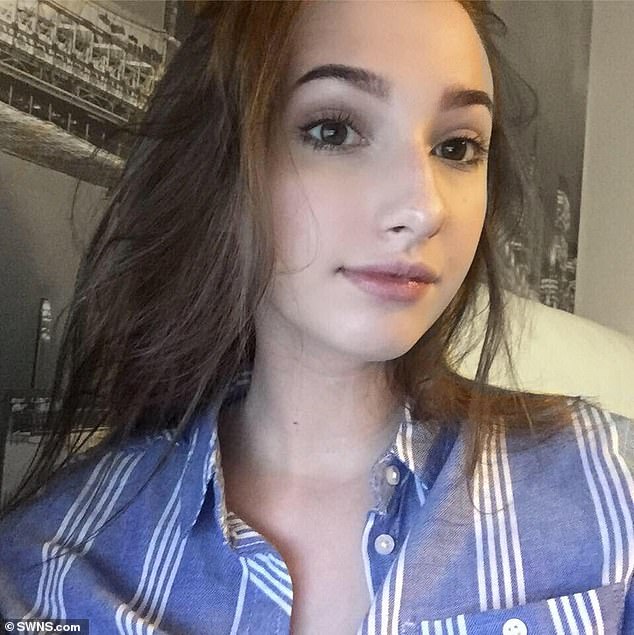 The student managed to make it through Freshers’ Week despite her severe vomiting, double vision and extreme fatigue. But halfway through her first lecture, Miss Hiley ‘couldn’t go on’

When Miss Hiley arrived at A&E, a doctor once again dismissed her symptoms as just a headache.

When the student asked for a CT scan, he even allegedly told her not to have one due to the ‘radiation’ it would expose her to.

Miss Hiley’s mother Emma picked her up from A&E before taking her daughter to Specsavers in Chelmsford when she ‘couldn’t function and kept seeing double vision’.

An optician noticed Miss Hiley’s optics nerves – which transmit information from the retina to the brain – were incredibly swollen.

The student was immediately referred to the eye department at Broomfield Hospital, in Essex, where she underwent a CT scan.

Doctors found a lesion on her left frontal lobe, with a biopsy later confirming it was cancer. This tumour was pushing against Miss Hiley’s skull, causing her headaches.

‘I remember the doctors coming into the room looking like a ghost and said, “I am very sorry” and at that point it was like I had an out of body experience,’ she said.

‘But I was so relieved at the time [to be diagnosed] after eight months of suffering.’ 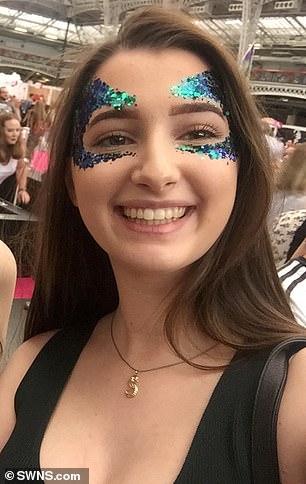 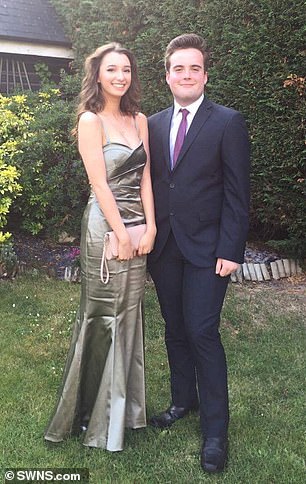 Miss Hiley was taken to University College London Hospital where the neurosurgeon Neil Kitchen performed the first of two craniotomies on October 24.

This is the surgical removal of part of the bone from the skull to expose the brain so the tumour can be removed.

However, while Miss Hiley was recovering at the start of the year, her headaches returned and she began hearing an ‘air’ sound.

When she went back for another scan, doctors discovered the tumour had regrown.

WHAT IS A GEMISTOCYTIC ASTROCYTOMA?

Astrocytomas are one of the most common forms of brain tumours, making up around a third of all cases.

They grow from cells called astrocytes, which protect nerves and are vital for processing information.

Gemistocytic astrocytomas are an aggressive form of the disease that are identifiable by their swollen cells.

There is nothing that people can do to prevent astrocytomas.

Their cause is unknown but may be genetic.

Astrocytomas are graded from 1-4 depending on how quickly they grow and how they respond to treatment.

Treatment depends on the grade, with 1-2 often involving surgery to remove as much of the tumour as possible.

Radio or chemotherapy may be given to kill any remaining cancerous cells.

Around 40 per cent of people with a grade 2 astrocytoma live more than 10 years.

Approximately 27 per cent with grades three or above live five years or more.

Miss Hiley’s diagnosis was updated to the rare tumour anaplastic astrocytoma and she had her second craniotomy on February 7.

Just like with her first, Miss Hiley was given 5-ALA, commonly known as the ‘Pink Drink’.

‘It makes tumours glow under UV light during surgery to aid surgeons in removing them,’ she said.

‘Doctors began by cutting into my skin, then cutting through the layers of muscle until the skull is fully visible.

‘Small circular hole were drilled into my skull and then a specialist saw is used to connect the holes, creating a bone flap which is removed and reveals a protective layer, this is [the] cut which reveals the tumour.

‘They drained the cyst which was causing the pressure in my head and making a noise in my ear, and sent me in for another MRI scan to ensure it was all gone.

‘They noticed there was still a bit of the brain tumour there and got rid of it all.’

The surgery was a success and Miss Hiley is undergoing a course of radiotherapy, which will be followed by chemo.

‘When we looked at the scan after the operation, it was the best looking scan you could possibly have,’ she said.

Miss Hiley is speaking out to raise awareness of her disease, and in support of The Brain Tumour Charity and their Young Adult Services.

‘I just want to raise more awareness for this,’ she said. ‘Obviously I have my moments and there is still apart of me that is in a bit of shock.’

She also hopes her ordeal will encourage doctors to more closely consider a patient’s symptoms.

‘I know people take advantage of A&E but why could they not look at how long I had been suffering [from] this for?,’ Miss Hiley said.

‘I have now met so many more people who have been suffering from [the symptoms] for longer.’