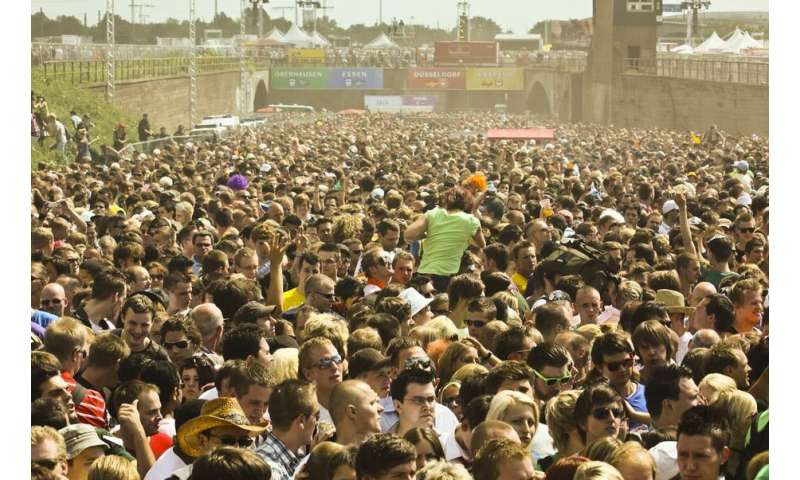 On July 24, 2010, more than a million dancing partygoers converged on an industrial zone in Duisburg, in Eastern Germany. They were attending the Love Parade, one of the most popular music festivals in the world. Decked out in sunglasses and fluorescent wigs, the happy revellers funnelled into a 200-meter-long tunnel, heading toward a former freight station where part of the festival was taking place.

In the mid-afternoon, heavy congestion formed at the end of the tunnel – the underground passage was too small to allow such an immense crowd to pass. As the minutes went by, the human density rose dangerously. The festivalgoers, pushed up against each other, soon could barely move their arms or even hands. At the core of the crowd, some no longer had enough room to breathe. Around 5 p.m., to the sound of techno beats played by the best DJs in the world, the first victims began to suffocate. In the end, 21 people died, and 651 were injured. One survivor told the newspaper Bild: “It was impossible to get out of the tunnel. There was a wall of people in front of me.”

Just one month earlier, I was defending my doctoral thesis in an amphitheatre at Paul Sabatier University, in Toulouse, France. The topic of my research was the movement of crowds. Over three years, I had examined mass movements in all sorts of places – shopping streets, markets, even in lab experiments. When the Love Parade accident hit the news, my friends and family all asked me the same thing: what should they do if they found themselves in that kind of situation? How could they survive if they were trapped in a crowd, like the victims at the Love Parade? Let’s find out.

There has been a steady rise in such crushes since the 1990s. On average, they claim the lives of 380 people every year. The most deadly killed 2,300 in Mecca in September 2015.

Three things draw the biggest crowds: religion, sports and festivities – a good summary of human interests. The Mecca pilgrimage, for example, attracts 2 to 3 million faithful every year. The capacity of a football stadium is of course far lower, in the tens of thousands, but public celebrations following key victories can attract hundreds of thousands into city streets. Think of the Champs-Élysées, swarming with people on July 15, 2018, after the triumph of the French team in the World Cup. Last but not least, music festivals draw enormous crowds. The largest on record – 3.5 million people – gathered at Jean Michel Jarr’s sound and light show in Moscow in September 1997.

In these extreme situations, the smallest organisational lapse can quickly lead to disaster. But what exactly happens in a crowd crush? Surprisingly, the dynamics of this phenomenon were only understood in the wake of a fresh tragedy.

A glimpse of the 2010 Love Parade prior to the accident (amateur video).

In 2006, crowd turbulence caused the deaths of 362 pilgrims in Mecca. This time, the accident was filmed by a CCTV camera and the footage was sent 5,000 kilometres away, to the laboratory of German physicist Dirk Helbing. A researcher specialised in crowd behaviour, Helbing was able to uncover the key to the mystery: the “crowd-quake”, a phenomenon that arises spontaneously when human density reaches a critical threshold of about six people per square meter. At this level of crowding, physical contact between bodies becomes so intense that the slightest movement causes a surge of turbulence through the crowd. Similar to those that occur during earthquakes, these shockwaves cause people to fall and places them all under crushing physical pressure.

Ever since this important discovery, crowd-quakes have been observed during deadly crushes like that at the Love Parade in 2010. Although our understanding of it is increasing, there’s currently no way of stopping this phenomenon once it arises.

What should you do if you are trapped in a crowd and you start to feel the walls are closing in? Here are a few survival tips from our research in our “Fouloscopie” (crowd studies) labs.

Your number-one goal is to get out of the sea of people as quickly and calmly as possible. Look around you: is it better to turn back or go forward? To find out, try to guess where the epicentre of the crush is located – where it is most crowded – and then move toward where the crowd thins out. Don’t forget to look up. You might find a quick escape by climbing a fence or getting up onto a ledge.

Time-lapse footage showing the crowd of pilgrims arriving in Mecca.

2. Leave while you can

If the crowd thickens around you, the available space is reduced and your freedom of movement gradually diminishes. The longer you wait, the harder it will be to escape. Given this, don’t hesitate to leave the highly congested area as soon as you start to feel uncomfortable, and while you still have enough room to move. By getting out of the crowd, you will also reduce the danger for others, since the area will be less crowded for those who stay.

If it’s too late to flee, the most important thing to do is retain your balance and stay upright. In a crowd crush, people are pressed so tightly together that if someone falls, they create a domino effect, immediately taking down those around them. Should you fall, the weight of other bodies will pin you to the ground before you have a chance to right yourself. So stay on your feet.

Oxygen is your most precious resource. The vast majority of deaths in stampedes are caused by asphyxiation. Avoid screaming unless you have to, and control your breathing.

In this video of an Oasis concert in 2005, the crowd-quake and surges are clearly visible.

Should the pressure become intense, fold your arms up in front of you like a boxer. In that position you can protect your ribcage and keep a few centimetres of space around your ribs and lungs so you can breathe.

When pushed, our natural reflex can be to resist the pressure and push back. In a crowd crush, however, resisting will be a waste of precious energy. Instead, let yourself be carried by the flow while always retaining your balance.

7. Move away from barriers

The only time when the previous tip does not apply is if you’re next to a wall, fence or other solid object you can’t climb up. The first victims of a crush are often pinned against barriers, as was the case in Turin in 2017 and in Heysel and Hillsborough disasters in the 1980s. If possible, move away from any walls, pillars and fences.

8. Understand the signs of density

To make good decisions, you must be able to evaluate the gravity of the situation. Here are a few rules of thumb for estimating crowd density:

If you have no physical contact with those around you, the density is probably still under three people per square meter, so at present all is well.

if you are bumping against one or two people around you without meaning to, the crowd density must be around four to five people per square meter. There is no immediate danger, but it would be better to move away from the centre of the congestion.

If you can’t freely move your hands, to the point that it is difficult to touch your face, there are too many people – the danger has become acute.

A panic is a specific situation in which a crowd rushes in the same direction to escape a real or suspected danger. Examples include the Place de la République in Paris (November 2015), the Falls Festival in Victoria, Australia (December 2016), the Piazza San Carlo in Turin (June 2017) and the Global Citizen Festival in New York City (September 2018).

In these kinds of situations, the movement of the crowd can be more dangerous than any threat, real or imagined. Take a moment to evaluate the situation and calmly move to safety, while staying as far as possible from the crowd.