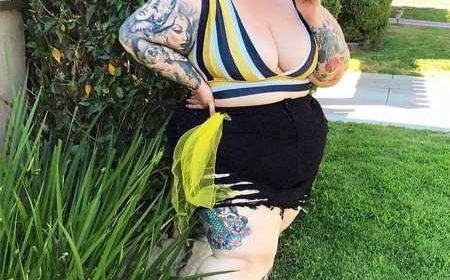 Tess Holliday proudly owns her body — she did create #effyourbeautystandards, after all — but privately, the model deals with rude people trying to destroy her self-esteem.

Holliday, 33, said she gets messages on social media every day telling her to “drop dead” because of her size.

“I would be lying if I said they didn’t affect me,” she said in an essay for InStyle. “I go to therapy to try to make sense of it all. I will tell someone to f— off if they deserve it, but I’d rather come from a place of compassion.”

The mom of two said that along with therapy, she mutes people who bring her down, and occasionally deletes her social media apps.

“Then I focus on my ‘self-care folder’ that has games like Cat Cafe, where you feed and pet little virtual cats,” she said. “It’s silly, but it takes me away from the negativity.”

Holliday said that people accuse her of “promoting obesity or recruiting people to be fat,” which just makes her laugh.

“If I say, ‘I love myself,’ and they think I’m saying, ‘Hey, you need to be 300 pounds, then you too could enjoy life as much as me,’ I have to smile,” she said. “People act as if I’m selling Tupperware or something — that’s not how it works.”

But she doesn’t see the point in dwelling on people’s negative comments.

“I can’t live life being miserable, because I could die tomorrow,” she said. “And then what — I was miserable because I was fat? What a waste.”

Still, Holliday said that she only recently started to love herself, and that modeling greatly improved her self-esteem.

“I never felt confident before I got on set; there was never any clothing I felt good or sexy in. Now I feel the most on top of my game when I’m at a photo shoot,” she said. “I thrive in that space because I know I am the person I always dreamed of being.”

“My life is only getting better,” she added.