Testicular cancer survivor, 34, to have a ‘miracle baby’ 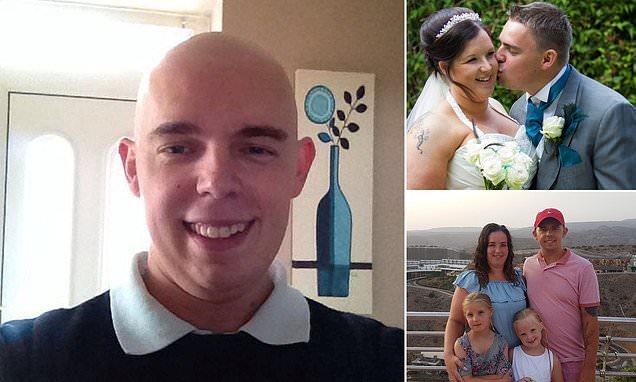 Testicular cancer survivor, 34, will become a father for a third time to ‘miracle baby’ despite fearing he would never conceive again ‘because he had one removed’

A testicular cancer survivor who feared he would never conceive naturally again is due to have a ‘miracle’ baby.

Daniel Westhead, 34, from Leicester, was shocked to find out a suspected bladder infection was in fact cancer six years ago.

The lorry driver, then 28, underwent an operation to remove his left testicle just four days before his wedding to his partner Danielle Westhead, now 34.

The loved-up couple wanted to have a third child, but feared the chances were drastically reduced due to the operation and nine weeks of chemotherapy.

Mr Westhead even froze some of his semen for use in future fertility treatment.

But to his amazement, his wife became pregnant and their baby is set to be born on August 5 – the same date as Mr Westhead’s initial GP appointment. 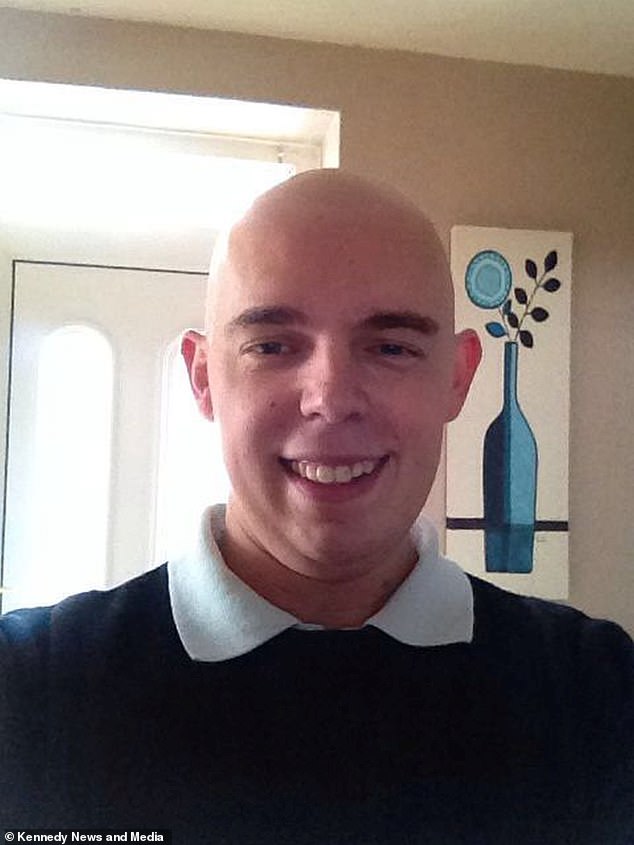 Daniel Westhead, 34, was shocked to find out a suspected bladder infection was in fact cancer six years ago, and had to have a testicle removed as well as nine weeks of chemotherapy 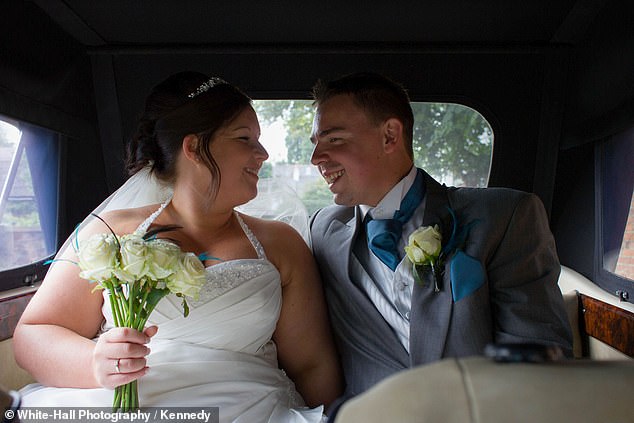 Mr Westhead and his wife, Danielle Westhead, pictured on their wedding day in 2013 – not long after the diagnosis – feared they would never have children again 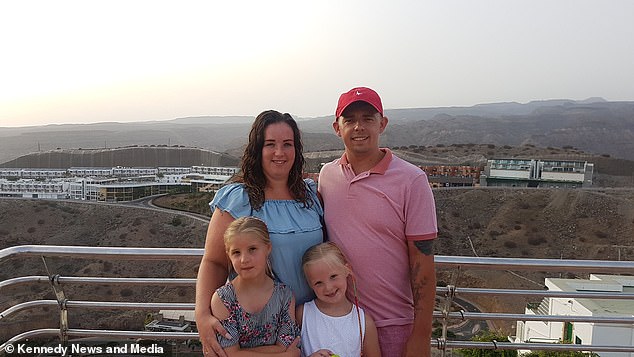 Mr and Mrs Westhead, who are parents to Ellie, 11, and seven-year-old Evie, had Mr Westhead’s semen frozen for future fertility treatment – but Mrs Westhead fell pregnant

Mr Westhead, who is father to Ellie, 11, and Evie, seven, said: ‘It is definitely a miracle baby. I’m still jumping for joy now.

‘I feel on top of the world. Yes we’ve got two daughters and we’re over the moon with them, but I personally didn’t think it would be possible to conceive naturally again.

‘I’ve wanted more children for years so I went to get tested to see if it was possible.’

After a low sperm count of just four million sperm on diagnosis, Mr Westhead was stunned when his latest sample came in much higher at 28million.

‘Before I started chemotherapy I had some sperm frozen in case we wanted another child, but we didn’t need any help. We’ve actually conceived naturally.

‘The chemo stopped my body producing sperm. For a good few years it didn’t come back for me.

‘Even though I’ve been tested and they said it might be possible, in my head I didn’t believe it would be.

‘To get to the stage where it has does mean a lot to me. To be proven wrong is amazing.’ 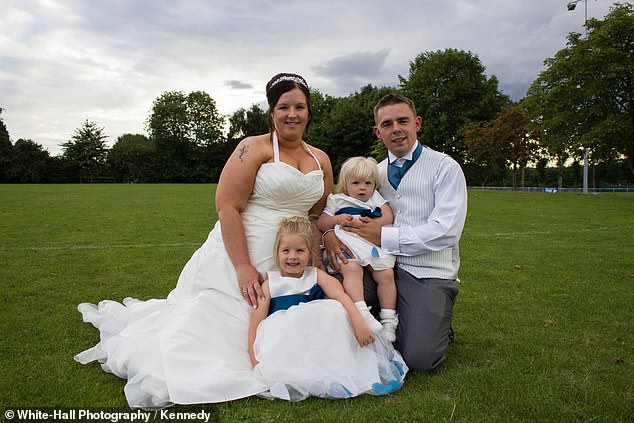 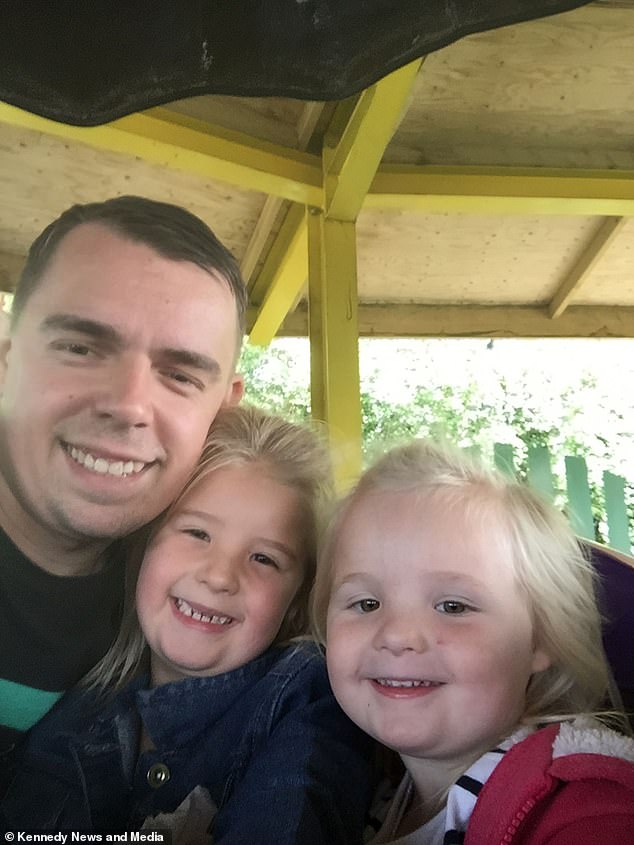 Mr Westhead, pictured with his daughters, said it feels amazing to ‘be proven wrong’ now that he is expecting a third child

It was just one month before the couple’s wedding that Mr Westhead went to an appointment with his doctor for what he thought was a water infection on August 5 2013.

He said: ‘When I first went to the doctor everything was as it should be testicle wise, I thought I had a water infection.

‘At the time I was working at a building site and I didn’t go to the toilet as often as I probably should have done.

‘He examined my abdomen and he said he needed to check my testicles. I was thinking, “I haven’t come for that, but no problem”.

But he claims he was stunned when the doctor examining his normal-looking testicles pressed down and the left one ballooned to three times the size and turned ‘rock hard’.

Mr Westhead said: ‘When he was examining me he pressed something and one of my testicles just ballooned to about three or four inches in size. It went solid like wood and was very painful.

‘I’d walked into the room and there was nothing amiss. I had no pain there but whatever the doctor pressed, the pain was just excruciating.’

WHAT ARE THE SIGNS OF TESTICULAR CANCER?

During the early stages, testicular cancer typically presents as a hard lump or swelling in a testis.

The lump is usually painless and can vary considerably in size but is typically the size of a pea and located on the front or side of the testicle.

Not all individuals with testicular cancer will present with a lump in their testicles.

Symptoms can be subtle and therefore easily missed which is why it is so important to familiarise yourself with how your testicles feel when they are healthy.

However the good news is testicular cancer is very treatable, with around a 95 per cent cure rate.

Mr Westhead was rushed for an ultrasound, referred to a specialist and just ten days later was diagnosed with testicular cancer – a rapidly growing stage two non-seminoma tumour.

Cancer Research UK figures show there are around 2,400 men are diagnosed with testicular cancer each year across the home nations.

In the US, an estimated 9,560 men will be diagnosed in this year, according to American Cancer Society. The average age of diagnosis is 33.

Mr Westhead said his affected testicle looked ‘like a bullseye’ on the ultrasound scan.

His consultant wanted to operate on him to remove it the very next day.

Mr Westhead delayed his operation to have time to digest the diagnosis, with the couple even discussing cancelling their wedding.

He said: ‘I went home from the doctors and I showed Danielle what had happened and we both couldn’t quite believe it.

‘I was 28 and I was looking around the waiting room and the majority of people in there were 40 years older than me.

‘It can come at any time and at any age but I’d always presumed that cancer would come on later in life.

‘It was quite a lot to get my head around, and with a wedding as well it was pretty full on.’

But after eight months of planning, they decided to stick to the original wedding date to try and keep things as ‘normal’ as possible.

Mr Westhead had his left testicle removed on September 3, just four days before he married Mrs Westhead, who was 26 at the time.

Mr Westhead said: ‘I was massively shocked, it was so painful.

‘Our wedding was a good day but it wasn’t quite normal because I was still in a lot of pain from the operation. I still had dressings on and stitches.

‘It [the wedding] gave me something else to focus on rather than what I was going through.

‘I ended up making all the table cards and the table plans at about 2 or 3am while everyone was asleep because I just couldn’t shut off.’

The following month Mr Westhead embarked on a gruelling nine-week course of chemotherapy which left him with ulcers under every tooth, black gums, collapsed veins in his hands and hair loss. 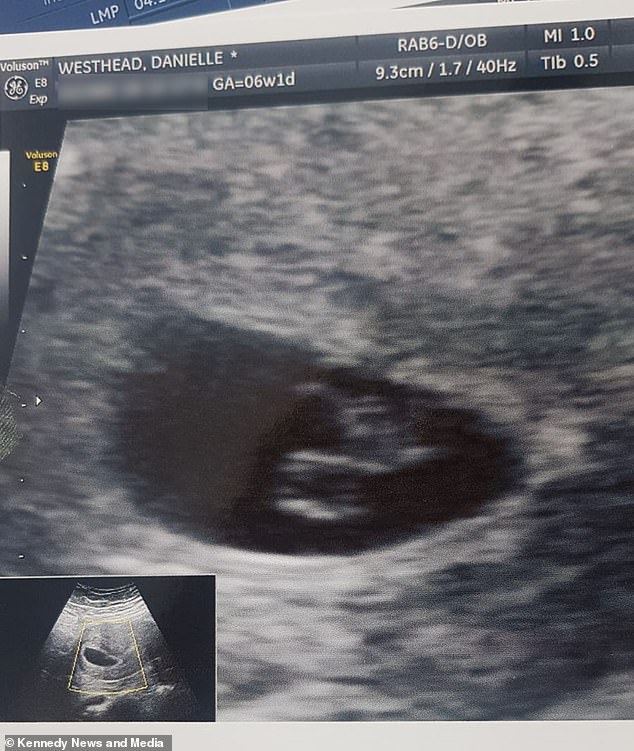 After a low sperm count of just four million sperm on diagnosis, Mr Westhead was stunned when his latest sample came in much higher at 28million. Pictured, the baby scan 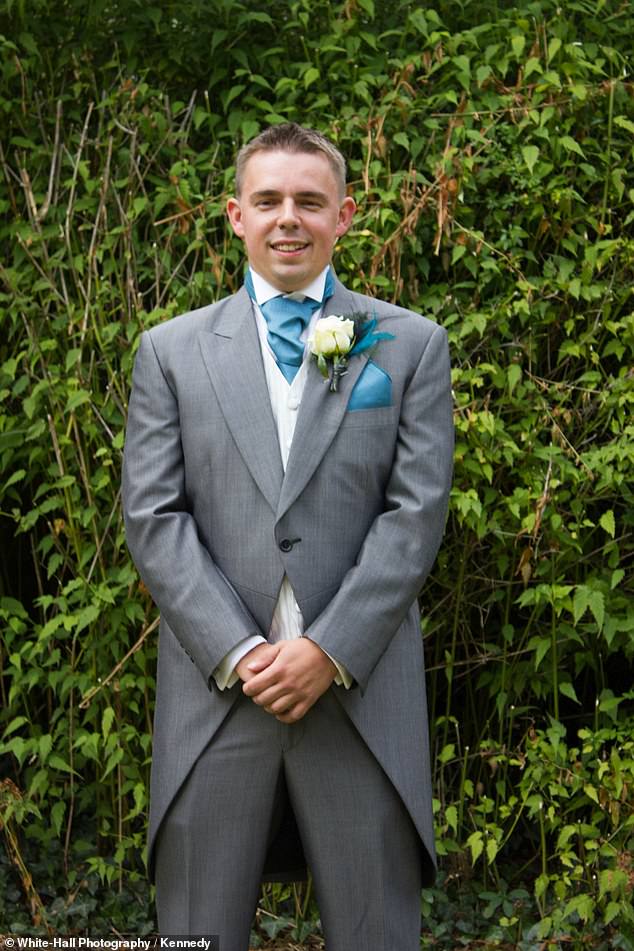 Mr Westhead needed to have his testicle removed four days before his wedding. He said he was in pain during the big day, which had taken his mind off his scary diagnosis

Even though he finished the chemo two days before Christmas 2013, Mr Westhead still suffers from tinnitus and constantly has one hot hand and one cold hand from the treatment.

Having a testicle removed does not necessarily effect fertility, but for some men their remaining testicle may not work so well, according to Cancer Research UK.

Chemotherapy for testicular cancer causes temporary infertility in most men who have it.

Usually fertility goes back to normal some months after the chemotherapy ends but for some men it doesn’t recover.

Mr Westhead said: ‘I haven’t had any treatment for the sperm though they’ve just returned on their own accord.

‘I’ve been lucky that way, even though it took a few years.’

After more than five years of tests and check-ups, Mr Westhead was finally discharged from hospital in November.

He is now speaking out about his treatment to encourage other men to get checked out if they suspect something is wrong.

‘So many of my friends have had pains in their groin and I’m always like, “just go to the doctor”,’ Mr Westhead said.

‘Don’t worry about your dignity. There are so many doctors and nurses that I’ve exposed myself to that it doesn’t even enter my head.

‘At the end of the day, your dignity is not important.

‘I think men in general are quite shy and a little bit reserved to go and get checked out. But with me, it just shows how quickly things can change. You need to get checked out.

‘If it doesn’t feel right, just go and get checked out, it can save your life.’

WHAT ARE THE MEDICAL IMPLICATIONS OF LOSING A TESTICLE?

He wrote: ‘Around 90 per cent of the male sex hormone testosterone, is produced by the testicles.

‘Testosterone is the hormone responsible for secondary male characteristics such as muscle, bone growth, hair pattern, deep voice and a general feeling of well-being in men.

‘It is also responsible for sperm growth. Having one testicle removed should not affect the overall testosterone levels, sex drive or ability to have an erection or fertility.

‘Providing that the remaining testicle is healthy, it should do the job of both.

‘If it is performed for testicular cancer and subsequent chemotherapy is needed, men will be advised to bank sperm as chemotherapy may cause temporary infertility.

‘Men who lose both testicles are likely to have erection problems due to the reduced levels of testosterone. They will also be unable to father a child naturally.

‘When testosterone levels are minimal men will often experience a loss of libido, well-being and may experience lethargy, low mood and depression, weight gain and sometimes breast swelling.

‘In this situation testosterone replacement therapy will be needed. This can be administered in the form of injections, gels or patches but may take some weeks for levels to normalise.’