The midlife crisis is REAL! 40s and 50s face toughest period of life

The midlife crisis is REAL! Work and life stresses peak in your 40s and 50s, study concludes

There may be a good reason for buying that sports car in your forties or fifties after all.

Researchers now say the ‘mid-life crisis’ is real, after observing the infamous slump across a swathe of data from thousands of people spanning every age group.

Work stress was found to peak at roughly 45, with people left feeling ‘overwhelmed in their workplace’.

It prompted scientists to say ‘something elemental appears to be going wrong in the middle of many of our citizens’ lives’.

In what the scientists called a ‘disturbing paradox’, these feelings occur at the same time when people should theoretically be happiest, with salaries peaking and barely any health woes. 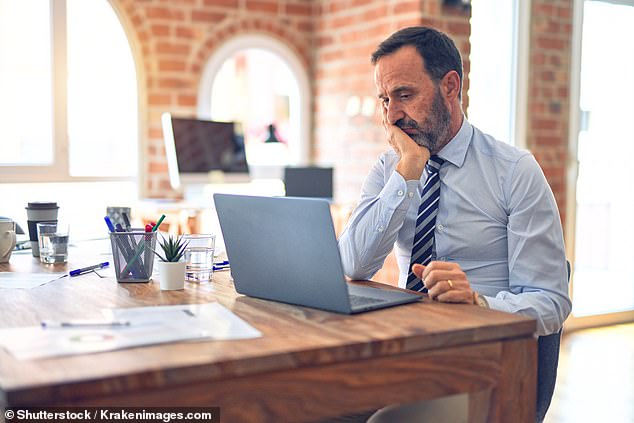 The midlife crisis is real, people in their 40s and 50s were found to be going the toughest period of their lives despite their income peaking

The term ‘midlife crisis’ was coined in 1965 by Elliot Jacques, a Canadian psychoanalyst, to describe challenges during the normal period of transition and self-reflection many adults experience from age 40 to 60.

During these years, adults may commonly question who they are in this world and in their life, what their purpose is, and how have they used their time thus far.

These questions can be triggered by the realization of the passage of time or changes that may occur with the physical body, such as a health scare or a diminished ability to perform physical tasks.

The emotions these questions and changes prompt may cause you discomfort, stress and confusion, and may lead you to feel that you are in a crisis.

Despite this stress, you might experience this time as the beginning of a new and exciting stage of life.

The authors, a mixture of British, American and Singaporean economists, said the phenomenon could be partly blamed on people feeling they’ve failed to meet key life goals.

They dismissed ideas that children were to blame, with data showing both parents and childless adults in their 40s and 50s experience a similar middle-age slump.

In the study, published by the National Bureau of Economic Research, the scientists collated data from thousands of people in countries like the UK, US and Australia.

Records on health and wellbeing were collected over several decades.

They found a ‘hump-like’ pattern in all risk factors, where people in their 40s and 50s were more likely to report mental health pressures and unhappiness than either their younger or older counterparts.

‘Midlife is a time when people disproportionately take their own lives, have trouble sleeping, are clinically depressed… find it hard to concentrate, forget things, feel overwhelmed in their workplace, suffer from disabling headaches, and become dependent on alcohol,’ the authors said.

This was despite the fact these people statistically should be enjoying the highest income of their lives, combined with the lack of health issues from aging.

‘Something elemental appears to be going wrong in the middle of many of our citizens’ lives,’ they said.

People in midlife were found to be twice as likely to experience depression as people over the age of 60 and people under the age of 25.

Risk of suicide risk was found to peak approximately in the early 50s, though the authors noted this was slightly earlier for women than for men.

Hospital admissions for sleep disorders were found to peak in the 50s and people in midlife reported the lowest number of hours of sleep per night, even for those without children.

Another study of 18,000 adults found reports of disabling headaches, an indicator of depression and anxiety, also similarly peaked in middle-age.

The authors do not go as far as saying what causes or triggers the midlife crisis, saying ‘much is still to be understood’ about the psychological phenomenon.

Some previous research has indicated that chimpanzees and orangutans suffer a form of ‘midlife psychological low’, which could indicate there is some biological trigger for a midlife crisis in primates.

But other studies do offer some hope the low period of the midlife crisis does pass.

A 2020 study found that, after dropping in midlife, happiness creeps back up as we grow older with people in their 70s being as happy as someone in their 20s.

The term ‘midlife crisis’ was coined by Elliott Jaques, a Canadian psychoanalyst in 1965 as a description for the when a person painfully comes to terms with the certainty of their mortality.