The perfect place to unplug is also ridiculously Instagrammable

There is an unavoidable irony in booking one of the off-grid cabins at Unyoked. They’re just so darn Instagrammable. Scroll through the hashtag #cabinporn and you’ll get the idea. The combination of a tiny wooden house, a huge window with a vista of nature, linen sheets, Penguin Classic books lining the shelves and an Aeropress coffee maker with single-origin beans means you’re stuck between wanting to “unplug” from your busy life, which is the whole point of Unyoked, and ’gramming the heck out of it.

Unyoked was started by twin brothers Cameron and Chris Grant in 2017 with the idea of escaping the rat race, and slowing down, by spending a night or two in the wilderness. 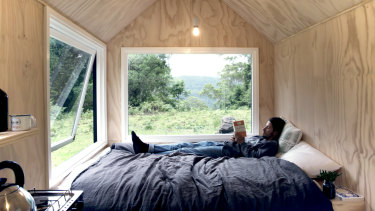 The Heike cabin, one of six Unyoked cabins where visitors can get away from their busy lives and unplug.

Inspired by the counterculture and free-spirited vibes of Yosemite in the 1970s and Byron Bay in the 1980s, their six tiny, solar-powered and mostly phone-signal-free cabins are located on various privately owned and previously inaccessible locations in NSW and Victoria, all within two hours’ drive of either Melbourne or Sydney. Their thinking, of course, is that escaping the nine-to-five grind shouldn’t be that hard.

For Cameron Grant, the concept of being “unyoked” is about rediscovering a sense of balance in life that can be easily forgotten in these times, when busyness is prized.

“Years of constant connection and the expectations and conventions of modern life are causing us to value our time differently,” he says. “People are looking for more balance and purpose in how they live and work. Unyoked facilitates that.”

It seems a lot of people want to put their phones down and just “be” for a while because the cabins run at around 95 per cent occupancy and the pair recently raised further funds to expand the concept.

When we arrive at our cabin on a farm on the NSW Central Coast, the idea of setting aside my phone, even for just one night, is appealing – if slightly daunting.

According to research conducted in 2018 by UK telecoms regulator Ofcom, British people check their smartphones every 12 minutes on average during their waking hours, and there’s little to suggest that figure would be substantially different here. Judging by the “screentime” feature on my phone, I am clocking in even more frequently than this. As a result, I am never bored, never still, never “off” and always easily distracted.

While one night of “unyoking” probably doesn’t count as a digital detox (for which there are many benefits, such as better sleep and feeling calmer and more productive), it does make for a rather picturesque opportunity to pause.

I’m relishing the chance to sit still and read a book without idly picking up my phone and mindlessly scrolling. Or to go for a walk and breathe in fresh air and look out at the trees and feel that the world is wide and the possibilities endless.

My husband and I put our screens away at the start of our visit – and don’t pick them up again until we leave. Instead, on the evening of our arrival, we make a campfire and toast marshmallows. The next morning we drink coffee in bed and watch the sun rise. For 24 hours we feel untethered. And, yes, unyoked.

We decide that these feelings of slowing down, being still, feeling present, are something we’d like to replicate back on the grid. Just as soon as I’ve posted the perfect picture of our tiny cabin on Instagram.

The writer stayed in the Heike cabin as a guest of Unyoked.

This article appears in Sunday Life magazine within the Sun-Herald and the Sunday Age on sale August 11.