The tiny glass beads that could stop radiotherapy side-effect

The tiny glass beads that could stop radiotherapy side-effect: Small objects placed inside the body could reduce downsides of cancer treatment, scientists say

Tiny glass beads placed inside the body could reduce the side-effects that cancer patients experience from radiotherapy.

Dozens of the beads, each less than a millimetre wide, are fed onto a thin cotton thread and inserted into the body through a tube and positioned to sit as close as possible to the tumour.

During each radiotherapy session, the beads soak up radiation.

At the end of each treatment, they are removed and fed through a scanner which measures how much radiation they were exposed to. 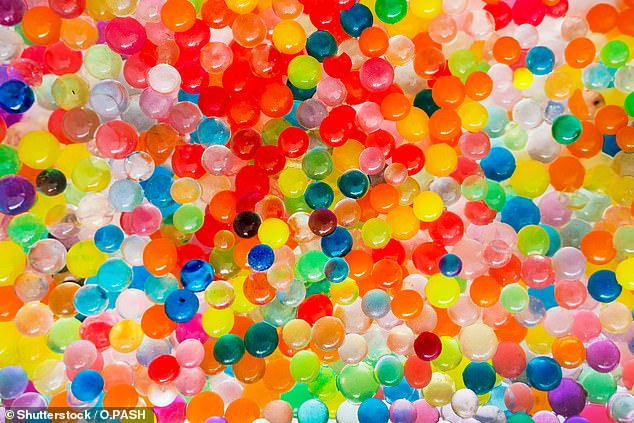 Dozens of the beads, each less than a millimetre wide, are fed onto a thin cotton thread and inserted into the body through a tube and positioned to sit as close as possible to the tumour. A stock image is used above

This informs doctors whether they’re directing the right amount of radiotherapy at the cancer.

If radiation stored in the beads is lower than planned and too weak to wipe out cancerous cells, then the patient’s next radiotherapy dose can be increased.

But if the beads show the dose was too high — and in danger of damaging surrounding healthy tissue — it can be lowered.

Around 40 per cent of all cancer patients undergo radiotherapy, which works by killing malignant cells, or by slowing their growth through damage to their DNA.

Typically, a machine beams energy through the skin towards the tumour site. The dose used is altered according to the type of tumour, where it is and its size. Doctors also need to consider how far into the body the energy needs to travel.

But while a machine can be programmed to deliver a specified dose, a difficulty with radiotherapy is determining how much radiation reaches the tumour.

Too little may not get the job done, while too much can worsen side-effects, such as inflammation. Doctors only know if the dose is right when the tumour starts to shrink, or there are obvious signs of harmful side-effects — both of which can take weeks to become evident.

The glass beads could refine the treatment right from the start.

Scientists behind the invention, called DOSEmapper, chose glass because it is able to store electrons, the particles which make up radiotherapy beams.

Once the beads on a string have been fed through the body to the tumour site, they are left in place during the first bout of radiotherapy.

They’re then removed and passed through a scanning device, which heats them up to 300c. At that temperature, the beads release the stored electrons in the form of light.

The scanner measures the light to determine how much radiation is in the beads and whether that corresponds to the dose that doctors intended for the tumour.

The results are then fed back to the cancer team, who can adjust the next dose if needs be.

DOSEmapper, which is being trialled at the NHS Clatterbridge Cancer Centre in Liverpool, was developed by Afghan physicist Dr Shakardokht Jafari, after she saw her father die from cancer and developed breast cancer herself.

The researchers say it is most suitable for tumours which can be relatively easily reached with a tube (catheter), feeding it through the mouth, genitals or rectum. But a bead mesh that can be used externally, for example draped over a breast during radiotherapy, is also being developed.

Dr Nicky Thorp, medical director of professional practice and clinical oncology at the Royal College of Radiologists, said: ‘Radiotherapy is one of the most important tools we have to treat cancer, and it’s encouraging to see efforts to make it safer and more effective. We look forward to seeing the results of clinical trials using this technology.’

The tiny seeds that pack a nutritional punch. This week: Chia seeds

These black seeds contain more calcium than the equivalent amount of milk, three times more iron than spinach, 15 times more magnesium than broccoli and are also rich in many of the nutrients the brain needs to function, including the mineral boron, and B12 for energy.

Chia seeds are also one of the few sources of the mineral selenium, which contributes to immune function.

The seeds swell when mixed with water to form a gel, and a tablespoon of chia seeds stirred into 30ml of water creates an effective egg substitute in baking.

Sex is not a major risk for men’s hearts, despite this being a popular drama plotline. Only 0.2 per cent of men die of a heart attack while having sex, according to patient records at St George’s Hospital in London. Researchers found that just 17 out of 6,847 patients who’d died of sudden heart attack had been in flagrante delicto. The problem was more likely in younger than older men, as a result of pre-existing heart conditions, JAMA Cardiology reports.

How to harness the power of your bodyclock. This week: Use an alarm clock

Waking up at the same time each day helps reduce daytime tiredness by keeping our body clock in sync.

But be realistic about the time you’ll get up, says independent sleep expert Neil Stanley.

‘If you rely on an alarm, then set it for the latest possible moment,’ he says. ‘The alarm is designed to startle you and will cause spikes in your heart rate and blood pressure, which causes stress and is the wrong way to start the day.

‘It’s far better you get additional, unbroken sleep than needlessly startle yourself by pressing the snooze button three times.’ 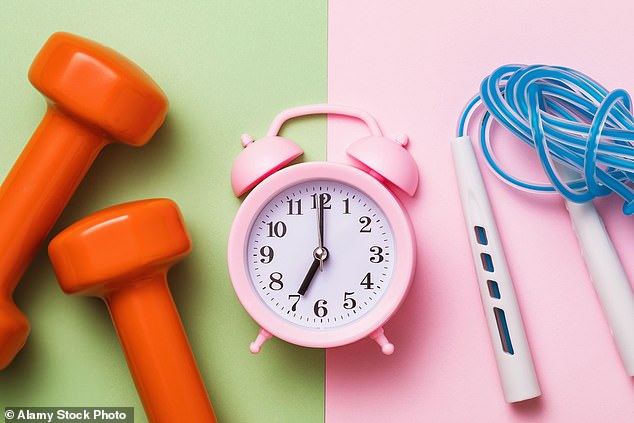 Having surgery for cataracts is linked with a 30 per cent lower chance of developing dementia, according to scientists at Washington University School of Medicine in the U.S., based on data from more than 3,000 patients.

Cataracts cause cloudy patches to develop in the lens of the eye. One theory is the improvement in vision keeps the brain more active, warding off dementia.

Another is that post-surgery, more blue light enters the eye. Studies show this suppresses drowsiness by blocking the sleep hormone melatonin and also improves short-term memory.

Two portions of grapes a day are good for the gut, researchers from the University of California in the U.S. report.

They asked volunteers to eat a low-fibre, low-nutrient diet for a month, and then eat the same diet but with 46g of grape powder (the equivalent of two portions of the fruit) each day for a second month. The results of the study showed that grapes boosted the participants’ gut microbiome — the trillions of microbes in the gut that are linked to many aspects of health.

The benefits are thought to be due to the high levels of cell-protective antioxidants and fibre in grapes, according to the journal Nutrients.