The tropical plant lighting up Sydney’s roadsides and private gardens

It’s been a great season for grevilleas. Those lucky enough to live near bushland have been enjoying the delicate flowers of our local species all through lockdown. The rest of us have been dazzled by the tropical grevilleas, such as “Moonlight”, whose showy lemon yellow flowers have been lighting up Sydney’s roadsides and private gardens for months, delighting both humans and honeyeaters.

How to get more grevilleas into the garden? The man to ask is Peter Olde. Olde literally wrote the book on grevilleas. It’s called The Grevillea Book, and comes in three volumes. His garden in Oakdale in the hills west of Camden is called Silky Oaks, which is the common name for Grevillea robusta, the tallest of the grevilleas at a handy 5-40m, and a striking flowering partner for jacaranda. It is also a compliant rootstock on which to graft more temperamental grevilleas from other parts of the country. 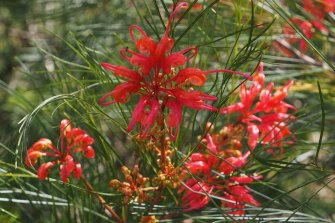 So I expected grevilleas in Olde’s garden; what surprised were all the non-grevilleas. In the wide border in front of the house, great pillows of brilliant blue lechenaultia lounged about with starry little philotheca, clumps of kangaroo paw, ribbons of sky blue and pink dampiera, a mound of the native hibiscus Alyogyne huegelii “Blue Heeler”, and yes, some of the lower-growing grevilleas.

Throughout the expansive property, large curving beds have been mounded up to provide better drainage on the heavy soil, so as to feature stars of the Australian floral catalogue. The waratahs were out in shades of red, pink and white, flannel flowers had seeded themselves in little pockets, the dramatic mottelcah from Western Australia was budding up and the rarely seen wedding bush, Ricinocarpos pinifolius was completely covered with starry white blooms.

The garden is part botanical ark, part experiment and full-on floral distraction. Trying to stay on track I asked Olde to single out a few exemplary, commonly available garden grevilleas. Looking around he pointed out Grevillea Johnsonii “Orange”: orange-red flowers glowing in front of the soft, needle-like foliage. It’s a rounded shrub to 3-4m, care-free, and just the thing for a handsome, less familiar screen than Grevillea “Moonlight”.

“Moonlight” and its fellow large-flowered tropical grevilleas are justly popular in gardens as both screening and feature plants. Olde reckons the best of them include the auburn-flowered “Honey Gem”, white “Ivory Whip”, and pink and white “Flamingo”. All can be pruned hard after flowering during the summer, following good rain so the plant isn’t drought-stressed. If left to get rangy they can be kneecapped, says Olde, and will shoot again from the trunk.

For something smaller, he says it’s hard to go past “Lady O”, to about 1.5 m high and a metre wide, with glossy leaves on slightly weeping branches and small bright red flowers most of the year. Even smaller is the groundcover Grevillea lanigera, totally easy-care and with flowers that light up the garden in late winter. “Mt Tamboritha” is the easiest cultivar to find.

Once hooked on the easily found grevilleas, join Olde in the Australian Plants Society for information on and access to the rarer gems.

Make the most of your health, relationships, fitness and nutrition with our Live Well newsletter. Get it in your inbox every Monday.

Most Viewed in Lifestyle