When humans gesture, they activate an ancient connection between movement and breathing 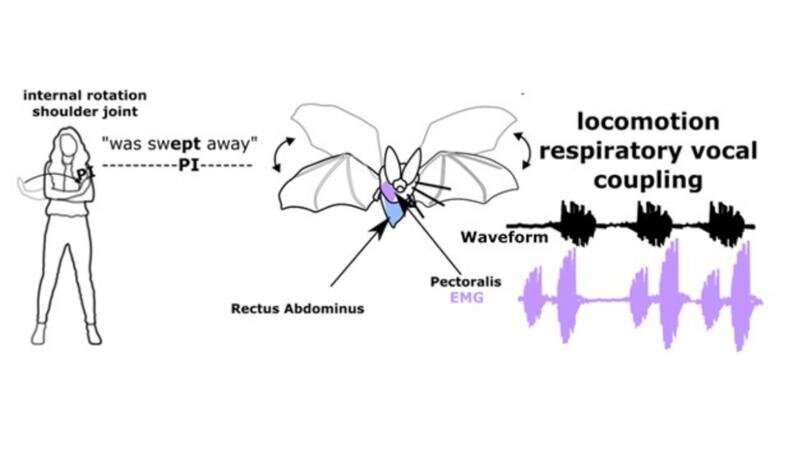 Researchers from Radboud University and ZAS Berlin have developed a new perspective on why humans often move their hands rhythmically during speaking. The perspective published in Neuroscience and Biobehavioral Reviews, suggests that there are striking connections between animal and human behavior when it comes to moving with sounds. For example, flying bats synchronize their echo-locating vocalization and their wingbeats which can be directly related to how humans synchronize acoustic features of their voice and move their upper limbs.

“When a bat echo-locates while flying, the muscle tensioning that drive the wingbeats also leads to small compressions of the lungs. It becomes more economical for the bat to vocalize during these particular moments of the wingbeat cycle, leading to synchronization,” says researcher Wim Pouw at the Donders Center for Brain, Cognition, and Behavior.

Pouw and his collaborator, Susanne Fuchs from Leibniz-Center General Linguistics (ZAS) suggest that this is comparable to what happens when humans produce rhythmic hand gestures, as another line of research has shown that these hand gestures affect rib cage movements, which slightly change the volume of the lungs, and thereby change aspects of the voice.

“Once we started reading up on very different lines of research, we were astonished how prevalent it is for animals to time their vocalizations together with movements. We discovered that coupling movement and vocalization might be very important for the development of vocal repertoires,” Dr. Fuchs says.

“This is exactly what is found in human infants around nine months of age,” Pouw says. “When infants start to rhythmically ‘babble’ with their hands in an exploratory fashion, they also start to ‘babble’ in speech in the form of reduplicated syllables such as ‘mama’ or ‘papa.'” Rhythmic movements may thus have very early connections with the voice, which explains why movement and sounds are so fundamentally related.

This new perspective of how gesture relates to the voice via interactions with respiration provides an answer to why humans started to move their hands while vocalizing and speaking: These systems physically interacted throughout evolution, and this development is in a way mirrored by infants who start to learn to move and vocalize at the same time.