Woman’s ‘daydreaming’ was epiletic seizures that she kept a secret

A schoolgirl who was believed to be ‘daydreaming’ in her classes was actually having epileptic seizures.

Ms Banovic, of Cheltenham, Gloucestershire, was diagnosed with epilepsy age 11, after two years of having the seizures.

At her worst, she would experience up to 30 seizures a day, lasting from ten seconds to five minutes.

Now, the graphic design student – who was home-schooled from the age of 15 – has opened up about her struggle. 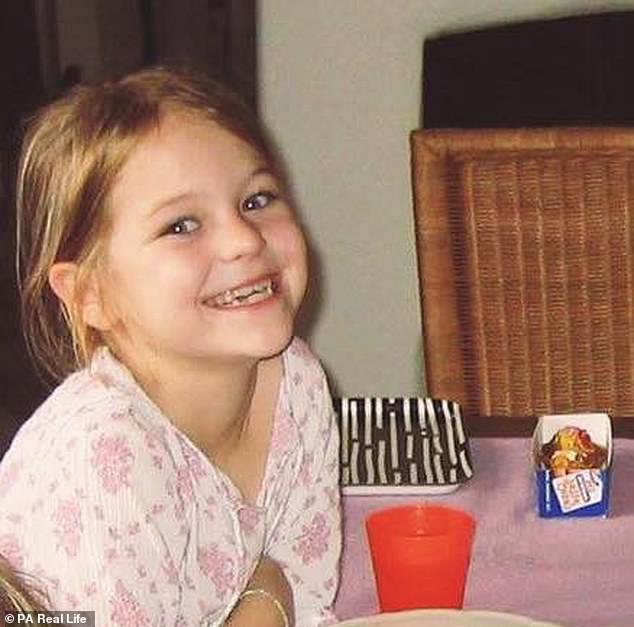 Jasmine Banovic, 21, was believed to be losing focus in her classes due to her absent seizures. Pictured age eight, before her seizures started 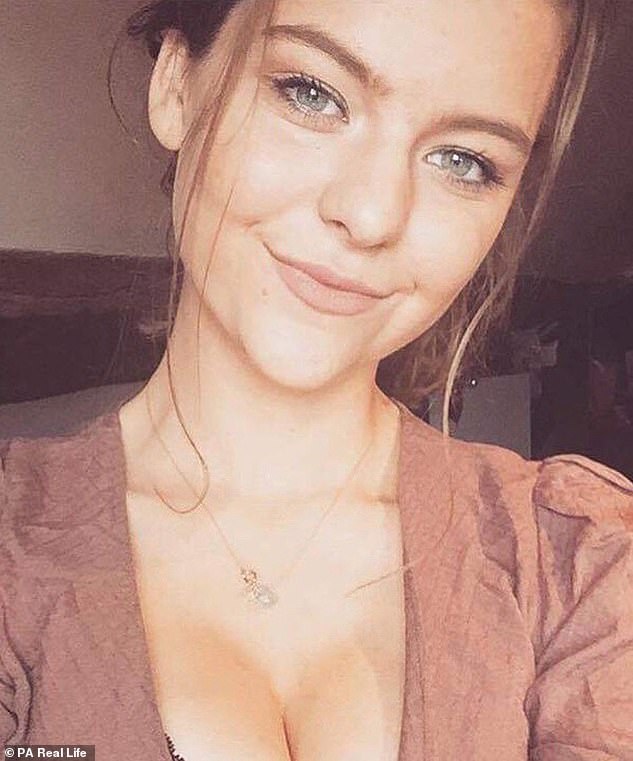 Ms Banovic, a graphic design student, was riddled with anxiety during her childhood, unable to reveal her epileptic diagnosis for five years

She said: ‘For the first five years after my diagnosis, I didn’t tell anyone other than my best friend and family.

‘At that age, you just want to be like everyone else. I didn’t want this to be happening, and saying it out loud felt like accepting it, which I wasn’t ready to do.

‘I think some of my other friends and teachers knew, as my parents had told them, but I never spoke to them about it. How could I explain this to others when I didn’t understand it myself?’

Ms Banovic remembers her absent seizures beginning when she was around nine years old but didn’t know what was happening.

WHAT ARE ABSENT SEIZURES?

The seizures of childhood absence epilepsy usually start between the ages of four to seven.

A typical absence seizure consists of a sudden loss of awareness. The child will suddenly stop talking or what they are doing and stare blankly into space. They will not respond to people talking to them.

The seizure is sometimes associated with repetitive, purposeless movements of the fingers, hands or mouth, such as some lip-smacking. These are called automatisms.

A seizure usually lasts between five and 15 seconds and usually stops as suddenly as it starts.

Absences that last longer than 15 or 20 seconds or that have a lot of automatisms or brief jerks of the head are usually called ‘atypical’ absences.

Absence seizures tend to happen more commonly when the child is bored, sitting quietly or when they are tired or unwell.

They happen less often when the child is busy or focused on an activity that they enjoy.

She said: ‘It wasn’t the sort of fit you stereotypically imagine when you think of epilepsy. Instead, I would lose all focus and stop responding.

‘People just thought I was daydreaming.’

Worried something more sinister was going on after speaking to a friend who mentioned absent seizures, Ms Banovic’s mother took her to see her GP.

Her hearing was tested but the results came back as normal, so Ms Banovic was referred to a neurologist.

This led to a string of tests and investigations and a diagnosis of epilepsy age 11.

The neurological condition causes seizures due to a sudden burst of intense electrical activity in the brain.

One in 100 people in the UK are diagnosed with epilepsy.

Childhood absence epilepsy accounts for two to eight per cent of cases, according to the Epilepsy Foundation.

In the US, there are estimated to be 2.2million people with epilepsy.

Ms Banovic said: ‘I had never heard of epilepsy then, so was really confused about what was happening.

‘I felt incredibly isolated, like the only child in the world this was happening to. I wish I’d known back then about all the support that’s out there, like the charity Epilepsy Action.

‘It would have been a lifeline for me to be able to talk to others in my position.’

In the years that followed, Ms Bavonic found herself crippled by anxiety, terrified of going out in public, or even to school, in case she had a seizure.

About 70 per cent of children with absence epilepsy will have their seizures completely controlled with one or two epilepsy medicines.

But with stress being a major trigger in Ms Banovic’s case, she found herself trapped in a miserable cycle, unable to get her seizures under control. 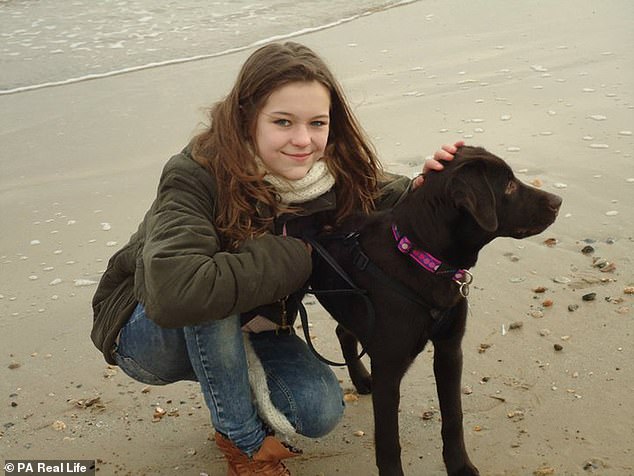 Ms Banovic, pictured age 13, fell back on schoolwork and felt misunderstood by her peers. She was home-schooled from the age of 15 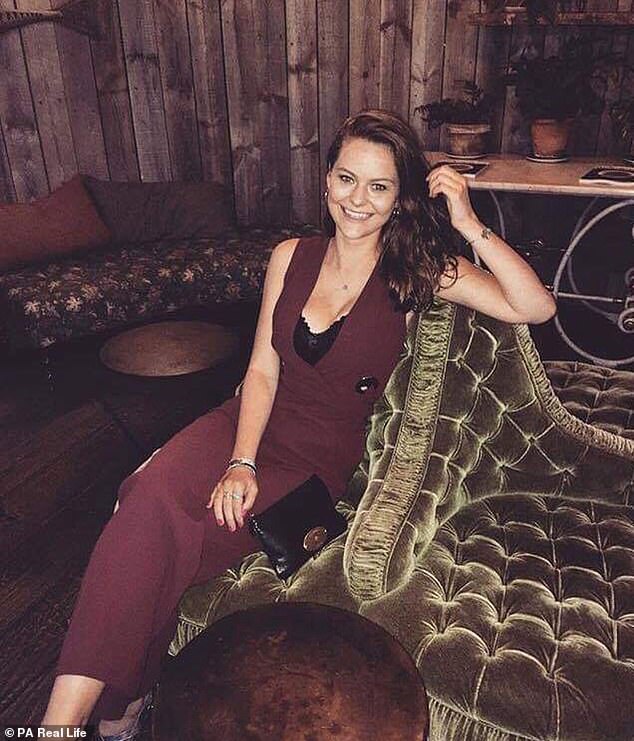 As a result, her education suffered and she ended up feeling left behind, before eventually leaving to become home-schooled aged 15.

She said: ‘I was having to miss school where my anxiety and seizures were really bad. The times I did go in, I felt ignored and misunderstood, as I had missed so much.

‘At that age, all you want is to fit in – but I felt so different. I ended up closing myself off from the world, not ready to face up to or talk about what was happening.’

Finding home-schooling a massive help, as it allowed her to catch up on her learning, Ms Banovic eventually felt ready to open up to a therapist aged 16.

Talking openly and honestly about how she felt encouraged her to then have frank conversations with her family and friends. 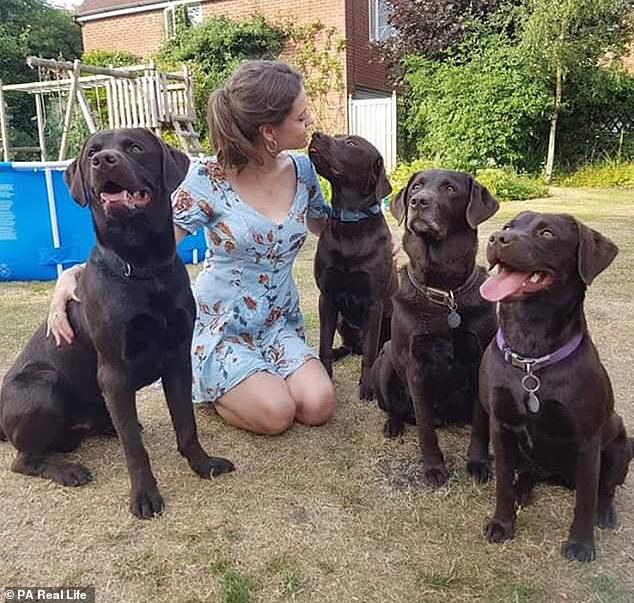 Ms Banovic, pictured with her dog Bronte and her puppies, now has her seizures under control with medication. She is speaking out to raise awareness 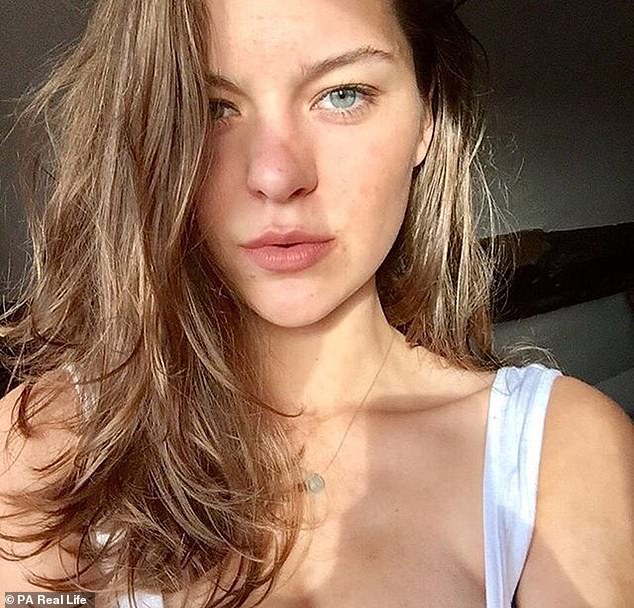 Her seizures were brought under better control by medication and she slowly started to feel stronger.

She said: ‘When you get such a huge thing thrown at you so young, it is incredibly daunting.

‘But talking was a turning point for me, and has allowed others to have a better understanding of what life with epilepsy is like.’

Ms Banovic is speaking out as a report, published by the Royal College of Paediatrics and Child Health, has found that almost 90 per cent of health boards and trusts do not offer any mental health support within epilepsy clinics.

This is despite the fact that children and young adults in the UK are four times more vulnerable to mental health problems, according to Epilepsy Action.

Ms Banovic said: ‘Because I am no longer having seizures, people assume I’m fine, which isn’t the case, as I still suffer with side effects.’

Although she feels mentally stronger than ever, Ms Banovic’s medication still causes fatigue, headaches and nausea.

She said: ‘I have no idea how well I’ll feel from one day to the next. As a result, I’ve lost friends over this, as they assume I’m cancelling plans as I don’t care when, in fact, it’s because I’m not well.

‘I’d like to see more education in schools, too, so teachers are better equipped to help children like me. If the right support is there, you can absolutely go on to have a happy, normal life.’

Today is Purple Day, an international day of awareness for epilepsy which falls on 26 March this year. For more information visit www.epilepsy.org.uk.

Epilepsy is a condition that affects the brain and leaves patients at risk of seizures.

Around one in 100 people in the UK have epilepsy, Epilepsy Society statistics reveal.

And in the US, 1.2 per cent of the population have the condition, according to the Centers for Disease Control and Prevention.

Anyone can have a seizure, which does not automatically mean they have epilepsy.

Usually more than one episode is required before a diagnosis.

Seizures occur when there is a sudden burst of electrical activity in the brain, which causes a disruption to the way it works.

Some seizures cause people to remain alert and aware of their surroundings, while others make people lose consciousness.

Some also make patients experience unusual sensations, feelings or movement, or go stiff and fall to the floor where they jerk.

Epilepsy can be brought on at any age by a stroke, brain infection, head injury or problems at birth that lead to lack of oxygen.

But in more than half of cases, a cause is never found.

Anti-epileptic drugs do not cure the condition but help to stop or reduce seizures.

If these do not work, brain surgery can be effective.