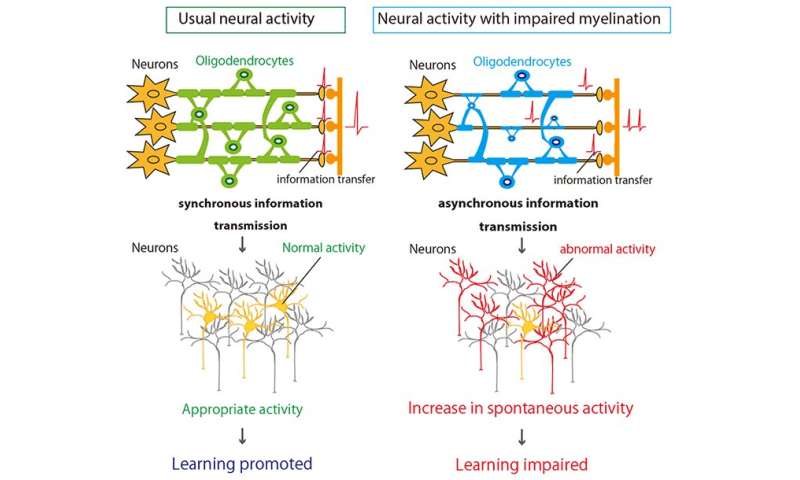 The neural circuit basis for motor learning tasks when myelination is impaired has been illuminated for the first time by an international collaboration of university research teams. They also succeeded in compensating for the impaired motor learning process by pairing appropriate actions with brain photo-simulation to promote synchronization of neuronal activities. This could contribute to future treatments for neurological and psychiatric diseases in which white matter function is impaired.

The results were first published in the journal Glia.

Myelin is sheath that forms around axons, regulating the speed of electrical impulses and efficiently transmitting them among the neurons. Myelinated bundles act as cables to connect distant brain regions. Once myelination is impaired or the myelin is damaged, the propagation of impulses in the neurons slows down or is dysregulated. This impaired regulation has been linked to abnormal activity in neuronal populations, resulting in learning deficits and aging (particularly in dementia and Alzheimer’s disease). The resulting changes in white matter have been observed in the MRI scans of patients with Alzheimer’s. However, it is still poorly understood how exactly impaired myelination affects the circuit properties of the brain that are important for learning and cognition.

The population activity of neurons in the primary motor cortex of mice with myelin impairments was measured during a motor learning activity using in vivo two photon microscopy. Mice with head plates were inserted into body chambers. The mice were trained to pull and hold a lever that would dispense drops of water. Mouse behavior was monitored by infrared video camera. In the early stages of training there was no difference in the performance between myelin impaired mice and control mice. However, in the later stage of training the myelin impaired mice had a lower success rate in performing the task, although the amount of attempts was similar. Although this suggests their motivation levels were the same, the myelin deficit made it more difficult for the mice improve their performance of this task. It also reduced the accuracy of their movements and increased the spontaneous activities of neuronal population.