After family’s health scare: ‘We had to do this together’ 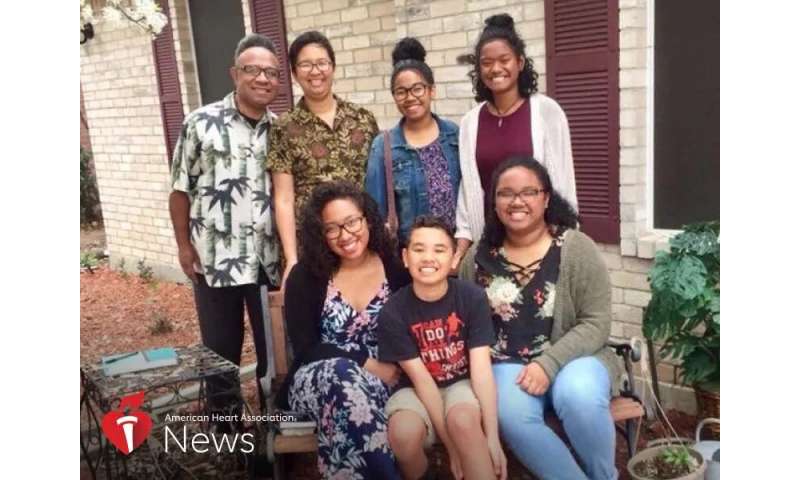 At his annual medical visit three years ago, John Lavaki told his doctor he sometimes felt short of breath going up and down the stairs.

An electrocardiogram showed abnormal electrical activity in his heart, so doctors ordered an echocardiogram. The ultrasound test revealed several blocked arteries to his heart and evidence of a previous heart attack he didn’t know he had.

He was admitted immediately to the hospital. The next day, doctors implanted several stents, or tiny wire mesh tubes, to prop open his arteries to restore blood flow and reduce the risk of another heart attack.

The experience convinced John and his family to change their lifestyle, which required overcoming some cultural food traditions and bad habits.

Born and raised in a remote village on the South Pacific island of Papua New Guinea, John played sports. He ate simply and walked to work.

That changed when he and his wife, Arlene, immigrated to the United States in 2003. Here, he drove everywhere, ate more and didn’t have time to exercise. He gained weight.

Doctors told him his heart condition was linked to high cholesterol, which may have been inherited from his parents, combined with a poor diet and lack of exercise.

Cholesterol is a waxy substance the body needs to make cells, but too much can build up in arteries, forming a hard deposit called plaque that can narrow arteries. Clogged arteries can block blood flow, causing a heart attack or stroke.

John’s heart experience was “a wake-up call for all of us,” Arlene said.

The Lavakis decided the whole family, including five children ranging in age at the time from 10 to 18, would strive to become healthier together.

“At first, the family complained,” Arlene said. “But we had to do this together to live longer and be healthy.”

They began eating more nutritious meals and exercising more, two of the best ways to improve overall health and to prevent heart disease, the nation’s leading cause of death.

Arlene realized many of the traditional dishes she made from her native Philippines were heavy in salt and fat. As a data analyst for the American Heart Association, she learned about healthy cooking and nutrition by reading articles and recipes. She experimented with herbs, such as basil and parsley, to season steamed vegetables.

A typical meal now is chicken breast and salad, instead of Filipino pork adobo. The family eats more seafood and less beef; snacks on more fruit and nuts instead of chips and cookies; and drinks less soda. They enjoy special dishes, like sweet and sour fish, on holidays.

John, a corporate security officer, began walking more at work and playing volleyball every Tuesday. The whole family can be found exercising together at the local gym to “hold each other accountable,” Arlene said. “It is quite a challenge, but we have to make a conscious decision every day to eat right and move more.”

Federal guidelines recommend adults should engage in at least 150 minutes a week of moderate-intensity physical activity or 75 minutes a week at a vigorous pace.

Over the past two years, John has lost about 15 pounds and reduced his daily medications from six to three. His cholesterol and blood pressure are now within a healthy range.