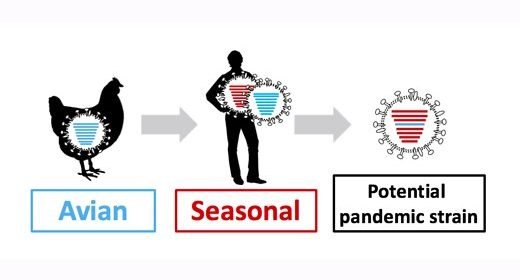 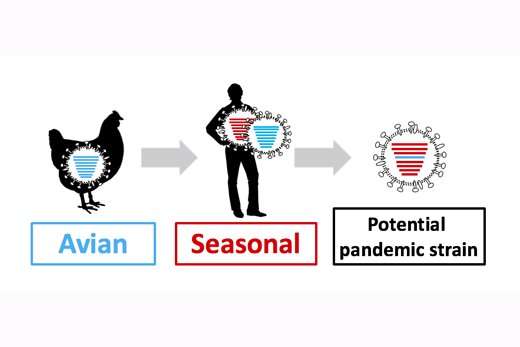 When influenza viruses that infect birds and humans meet in the same cell, they can shuffle their genomes and produce new strains that might have pandemic potential. Think of this process, called reassortment, as viruses having sex.

In the last several years, public health officials have been monitoring two varieties of bird flu viruses with alarming properties: H7N9 and H5N8. Scientists at Emory University School of Medicine have been probing the factors that limit reassortment between these strains and a well-known strain (H3N2) that has been dominating the last few flu seasons in the United States.

The good news is that “packaging signals” on the bird flu viral RNA genomes were often incompatible with the H3N2 viruses. That means it could be difficult for segments of the genome from the bird viruses to get wrapped up with the human viruses. Mix + match still occurred at a low level, particularly with H5N8.

The results are scheduled for publication in Proceedings of the National Academy of Sciences.

“What we see is that sequence differences between the human and avian viruses limit the potential for reassortment,” says Anice Lowen, Ph.D., associate professor of microbiology and immunology at Emory University School of Medicine. “But the low level of compatibility could be more significant if reassortant viruses have an advantage, for example, because of pre-existing immunity. It highlights the continued need for surveillance.”

Graduate student Maria White, who conducted most of the experiments, emphasizes that she was not handling intact infectious avian flu viruses, which could be dangerous. Rather, she took just a bit of genetic information from them: the packaging signals for the hemagglutinin-encoding segments.

Hemagglutinin is one of the main external proteins enabling the virus to bind and infect our cells. And packaging signals are parts of the viral RNA genome that tell an infected cell to wrap up that piece of RNA into a new virus. They’re sort of like our chromosomes, but much smaller.

White inserted only the packaging signals into H3N2 viruses, which are studied in the laboratory under biosafety level 2 conditions. Careful and rigorous, but no space suits needed. She found that the hybrid viruses still were able to replicate well.

However, when she co-infected the hybrid viruses with standard H3N2, the hybrids were not taken up into newly produced viral particles as well as H3N2. A similar thing happened when White co-infected guinea pigs, and had those guinea pigs in the same cage with a healthy animal. Mostly regular H3N2 virus was transmitted, but she did detect transmission of viruses with H5 packaging signals.

“These findings suggest that H5 packaging signals are sufficiently compatible with H3N2 viruses to allow a low level of transmission,” the authors write.

White says the packaging incompatibility could come from interactions between viral RNAs as well as between bird flu RNA and human flu protein. She adds that other factors could come into play in determining compatibility, such as differences in which tissues the viruses like to infect.