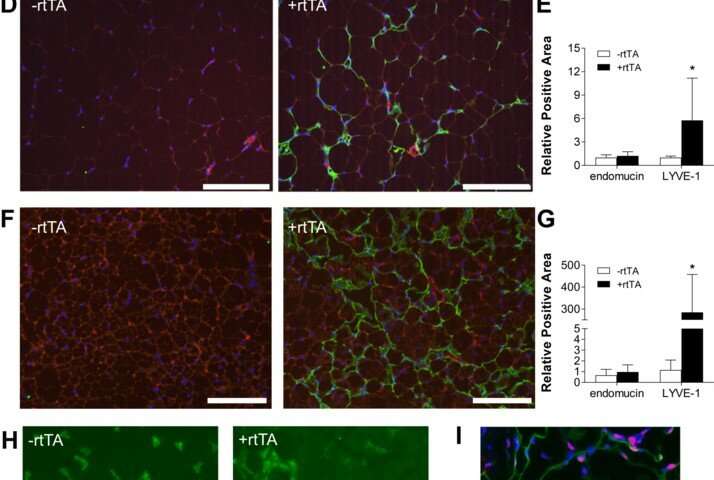 The search by scientists to find ways to combat obesity continues. Recently, investigators have been exploring whether they can engage the lymphatic system to help regulate obesity-induced inflammation of fat (adipose) tissue and restore systemic metabolic fitness. In a study appearing in he American Journal of Pathology, researchers report that augmenting lymphatic vessel formation in obese adipose tissue via vascular endothelial growth factor (VEGF-D) signaling reduced obesity-associated immune accumulation and improved metabolic responsiveness, suggesting a new approach to ameliorating some obesity-associated metabolic abnormalities.

In obesity, adipose tissue expands and becomes dysfunctional, leading to the appearance of a cluster of medical issues known as “the metabolic syndrome,” which includes increased blood pressure, high blood sugar, excess body fat around the waist, and abnormal cholesterol or triglyceride levels. The adipose tissue found in obesity exhibits symptoms of chronic inflammation, including hypoxia, immune cell accumulation, and fibrosis, leading to spilling over of pro-inflammatory substances and excess lipids into the circulation. This allows fat to circulate and be deposited in other tissues that are less well-equipped to safely store it.

“Adipose tissue inflammation is at the root of the epidemic of obesity’s metabolic syndrome. Reducing inflammation in mice has worked to improve metabolism but has not translated well to humans,” explained lead investigator Joseph M. Rutkowski, Ph.D., of the Division of Lymphatic Biology, Department of Medical Physiology, at Texas A&M College of Medicine, College Station, TX, USA. “Understanding the mechanisms of adipose inflammation and how to regulate it sheds light on the biology of our current obesity problem. We hypothesized that increasing lymphangiogenesis (formation of lymphatic vessels) in adipose tissue would help to reduce obesity-associated adipose inflammation.”

Normally, the primary function of the lymphatic system is to transport lymph, a fluid containing infection-fighting white blood cells, throughout the body via lymphatic vessels. Lymphatic vessels are similar to the circulatory system’s veins and capillaries. The lymphatic vasculature and lymphatic endothelial cells in tissues are essential for maintaining tissue balance through the uptake and transport of peripheral fluid, large molecules, and immune cells. Tissue inflammation is often accompanied by the formation of new lymph vessels, a process known as lymphangiogenesis. Although obesity seems to inhibit lymphangiogenesis and reduce lymphatic function in adipose tissue, the goal of this research was to determine whether artificially enhancing the lymph system in obese adipose tissue can be beneficial.

The investigators developed a new transgenic mouse model to test their hypothesis. The model allows for activation of vascular endothelial growth factor receptor-3 (VEGFR-3), a receptor known to regulate lymphangiogenesis, by elevating expression of its ligand VEGF-D from fat cells. Unlike human VEGF-D, mouse VEGF-D does not affect blood vessel formation or function. The investigators used these inducible adipose VEGF-D overexpressing (Adipo-VD) mice fed a chronic high fat diet to identify the impact of increased VEGFR-3 signaling and lymphatic density in obese fat.

“The studies showed that despite equivalent weight gain, the Adipo-VD mice demonstrate reduced systemic insulin resistance, liver lipid deposition, and adipose immune accumulation when compared to their littermates. For a long time, we did not think this model worked. Native lymphatics in mouse adipose are quite sparse. It turns out that our VEGF-D expression level was relatively low and lymphangiogenesis in this context takes months. It does align well with the four-month time course of diet-induced obesity that we used. We still have more mechanistic work to do, but the phenotype is exciting,” concluded Dr. Rutkowski.