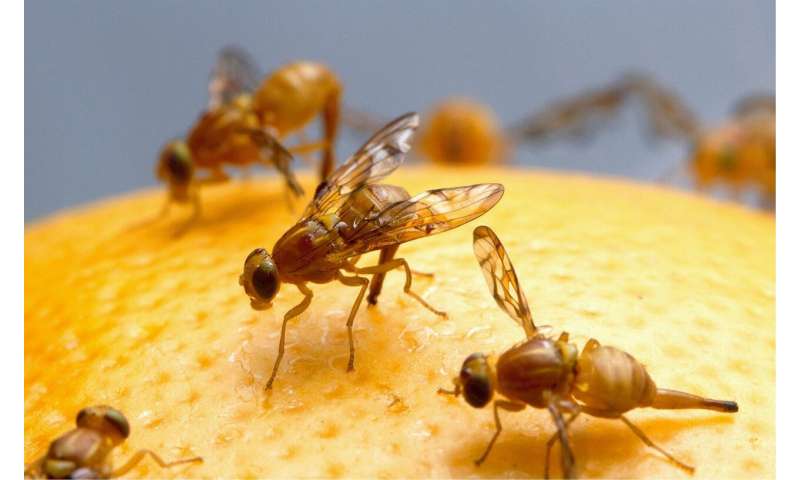 A team of researchers at Oxford University has found that oxidative stress plays a role in determining when fruit flies go to sleep. In their paper published in the journal Nature, the group describes their study of fruit fly neurons and what they found.

Most people know that when they do not get enough sleep, their body suffers, but just how much is not really clear. In this new effort, the researchers sought to learn more about the mechanism that controls sleep—the specific parts of the brain that are involved as people transition from consciousness to sleep. Because it’s impossible to study the neurons up close in the human brain as the transition to sleep occurs, the researchers turned to fruit flies—insects that have helped scientists learn about the sleep cycle for over a half-century.

Prior research has shown that fruit flies have a cluster of neurons that manage the sleep cycle. When these neurons are firing, a fly will sleep. Conversely, when they are inactive, the fly awakens. But what makes them fire or stop firing? That is what the team at Oxford sought to learn.

To find out, they took a closer look at the neural cluster involved in sleep and the ion channels used to connect them with other parts of the neural system. Prior research had identified two such channels named Shaker and Sandman. When a fly is sleeping, most of the electrical current involved with the sleep neurons was found to pass through the Shaker channel. That presented the question: What was behind the generation of more or less current through the Shaker channel? A closer look revealed a group of small molecules collectively called nicotinamide adenine dinucleotide phosphate that behaved like a switch, flipping on and off. And oxidative stress acted on the switch.