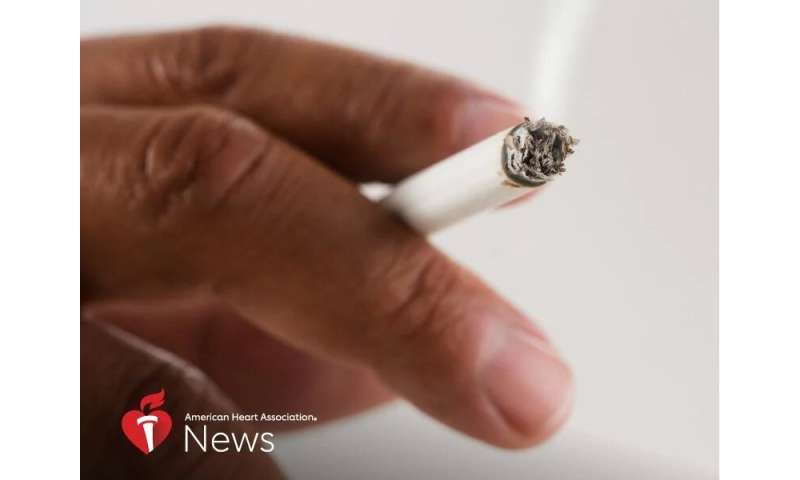 African-Americans who smoke cigarettes are twice as likely to have a stroke than those who avoid tobacco, according to new research.

Previous studies have shown that, overall, African-Americans between ages 45 and 64 have two to three times the risk of stroke compared to white people. But there has been little research on links between smoking and stroke among black people.

For the new study, presented this week at the American Heart Association’s Epidemiology and Prevention/Lifestyle and Cardiometabolic Health Scientific Sessions in Houston, researchers looked at data from nearly 4,500 African-Americans.

“The study shows the more you smoke, the more you stroke,” said the study’s lead author, Dr. Adebamike Oshunbade, of the University of Mississippi Medical Center. “African-Americans are already more susceptible to stroke, and when you add in cigarette smoking, they’re much more likely to develop stroke.”

About half of all African-American men and women in the U.S. have some form of cardiovascular disease. Despite those statistics, the tobacco industry has aimed its products at African-Americans with direct-mail promotions and campaigns promoting menthol cigarettes, according to the Centers for Disease Control and Prevention.

“The fact that tobacco companies target these groups is troublesome, to say the least, and it makes it all the more important to get this information and this message out,” said study co-author Dr. Michael E. Hall, a cardiologist at the University of Mississippi Medical Center.

The study showed no significant difference in stroke risk between past smokers and those who had never smoked.

“That implies that quitting smoking could reduce the risk of having a stroke,” Oshunbade said.

Dr. Ralph Sacco, a neurologist who was not involved in the research, called the study “an important confirmation” of evidence that supports cigarette smoking as a key risk factor for stroke in African-Americans.

“We need to find more effective, innovative ways to eliminate smoking in this population. We need to focus on educational campaigns for younger African-Americans so they don’t start smoking to begin with,” said Sacco, chair of the neurology department at the University of Miami Miller School of Medicine.

About 13 percent of study participants were current smokers, a percentage that mirrors nationwide statistics for black smokers. Sacco said lowering that percentage is a reasonable goal in an era of smoking cessation advancements that include new medications and behavioral counseling.

“There are many effective ways to quit smoking. We can’t really advocate which method works best, but we need to emphasize that all patients need to find some way to quit,” he said.

The study was done in conjunction with the AHA’s Tobacco Regulation and Addiction Center, which helps evaluate cardiovascular harm from tobacco products.

Hall said he and other researchers at the center are conducting new research on which compounds in tobacco products might cause the most harm in smokers, including compounds in e-cigarettes.