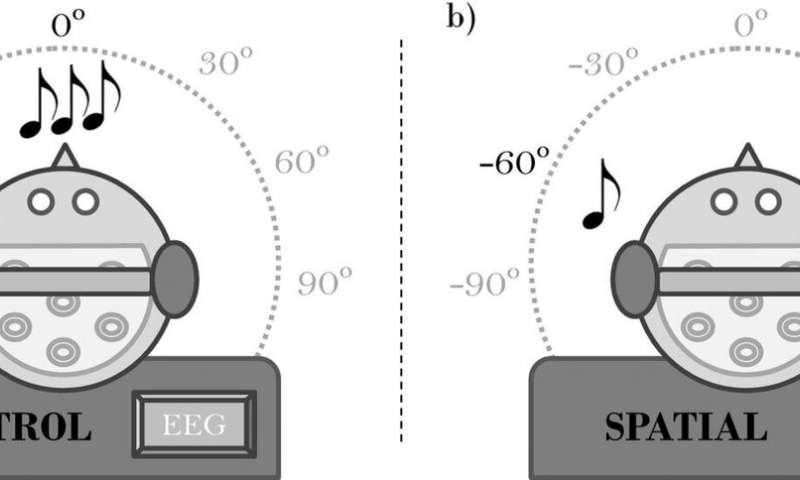 When listening to a song or watching a dance, humans tend to follow the rhythm of the music. This is because one fundamental aspect of music is its rhythm, the way we synchronize with the temporal regularities of a melody or a dance. A recent study explores how our brain fuses with musical rhythm and the extent to which humans share this ability with other animals.

Alexandre Celma-Miralles and Juan Manuel Toro, an ICREA research professor with the Department of Information and Communication Technologies (DTIC), and members of the Comparative Cognition and Language (LCC) research group at the Center for Brain and Cognition (CBC) at UPF, explain this peculiarity in an article published this November in the journal Brain and Cognition.

“This study explores the relationship between the rhythmic structure of music and the spatial dimension of sound. We study how the brain interacts with sounds that are spatially separate to build up a metrical structure,” explain Celma-Miralles and Toro, the authors of the study.

So, they compared the neural responses of professional musicians with those of untrained listeners while both groups listened to a waltz. In one of the study experiments, the participants had to pay attention to sounds defined by their spatial position (the sounds were separated in space). In another experiment the participants had to pay attention to a visual distraction. Data for the study were obtained from the frequencies of EEG recordings of each subject.

Rhythm and beat are enhanced by experience

The researchers found that regardless of the participant’s musical training, the brains of all listeners synchronized with the rhythm. The results also showed that musicians’ neuronal responses were much stronger and more resistant to distractions than those of non-musicians. That is, the study revealed that training facilitates rhythmic synchronization.