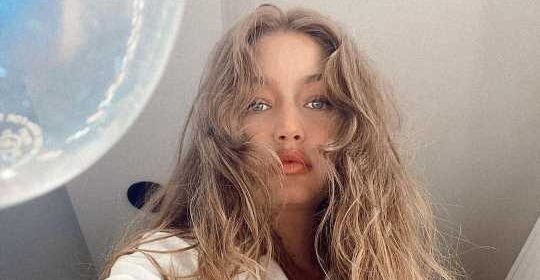 Nailing the snapback! Gigi Hadid gave a tiny glimpse at her post-baby body for the first time.

On Thursday, January 28, the Victoria’s Secret stunner took to Instagram to share two pics of herself in an all-white ensemble. Her abs managed to peak through a cropped shirt that she wore for the stunning selfies, which she captioned: “Workin 9-5 🗽.”

The 25-year-old model gave a closer look at her flat belly via her Instagram Stories, as she shared a black-and-white video of her hair and makeup for the day.

Us Weekly confirmed in April 2020 that Hadid and her boyfriend Zayn Malik were expecting their first child together. She previously learned of her pregnancy two months earlier when she was gearing up to hit the runway.

“I found out the day before the Tom Ford show,” she wrote via Twitter on January 18. “I was so nauseous backstage but I learned I could kinda control it if I continuously ate, so my mom, [Yolanda Hadid], would pack me snacks before each show. Bless.”

The couple welcomed their daughter, Khai, in September 2020. In the month after their newborn’s arrival, Hadid revealed how she was balancing life as a first-time parent.

“Thank you cards are on the way. If I have not posted about something, it is not from a lack of gratitude. Just a new mom trying to get it all sorted while she naps,” she shared in a handwritten note posted to Instagram in October 2020. “I am overwhelmed with how many beautiful things this little one has already been spoiled with by people I love — and I will slowly probably share them.”

Hadid and the 28-year-old “Dusk Till Dawn” crooner have been dating off and on since 2015. Us confirmed last January that the twosome reconciled after splitting the previous year.

The duo’s relationship has only progressed since entering parenthood. “Zayn and Gigi’s relationship is better than ever — their communication, the time they spend together,” a source told Us last October. “They’ve never looked happier.”

Scroll down to see Hadid showing off her post-baby body.

In order to view the gallery, please allow Manage Cookies